Our Pick Yorkshire are favorites to win

Who will win Yorkshire vs Durham, Vitality Blast 2019?

Yorkshire Vikings go in search of just their second win of their 2019 Vitality Blast when they take on Durham at Headingley. The North Group fixture takes place on August 16 and the live action begins at 19:00.

Yorkshire are bottom of the group having lost four matches, tied another and seen three games fall victim to the weather. Their only win was against Leicestershire in their third match. As well as avoiding bottom place they have pride to play for against their northern neighbours, however, and won both games against Durham last season.

Durham, on the other hand, need to win after somehow failing to beat Worcestershire last time out – surrendering a winning position that would have seen them jump to second in the table. Instead, they go into this match in fourth place.

YORKS vs DUR, Vitality Blast 2019: Where to watch/Live streaming

Yorkshire won the toss and elected to field first in their most recent match at Headingley. Having lost that match, however, Tom Kohler-Cadmore might choose to bat first if given the chance  to do so this time.

After a rain-hit tournament, there could be more frustration at Headingley on Friday night – the forecast for Leeds is for rain all day.

The Headingley wicket has been good for batting so far this season, with a minimum score of 170 seemingly the requirement for the team batting first.

After their bowler-heavy team selection for the last match did not pay off, Yorkshire Vikings could hand a recall to Gary Ballance in place of Jack Leaning.

Tom Kohler-Cadmore: The captain is Yorkshire’s top run scorer so far this season, with 233 including two half-centuries. The big-hitting opener has had a big part to play in previous wins against Durham too.

Adam Lyth: The former England test opener has scored just seven runs less than his opening partner, Kohler-Cadmore, and has scored his runs at a brilliant 162.58 strike rate. He has two half-centuries to his name in this season’s competition.

David Willey: So unlucky not to be named in England’s World Cup squad, the all-rounder has taken five wickets in six matches with an economy rate of just less than eight runs per over. He has also hit 82 useful runs but will want more of both as he looks to prove his worth.

Defeat in the Roses match at Headingley seems to have knocked Yorkshire for six as they have not won a game since losing to Lancashire. The reverse fixture against the Red Rose county was abandoned, while Yorkshire tied with Birmingham Bears in their match before that – Tom Kohler-Cadmore hitting an unbeaten 76 as the Vikings’ exactly matched the Bears 177/4.

Last time out, meanwhile, Yorkshire won the toss against Derbyshire but were then set 208 to win and could only reach 152 all out in reply.

Durham named an unchanged squad for their back-to-back T20 Blast fixtures against Worcestershire Rapids and Yorkshire Vikings. Against the Rapids, Chris Rushworth and Ben Raine were the two to miss out. Big-hitting left-hander Raine has struggled for form this season.

D’Arcy Short: The Australian opener and star of the Big Bash League has brought his match-winning form to England, where he has hit three half-centuries so far and hit 42 at the top of the order against Worcestershire last time out.

Peter Handscomb: The Australian World Cup squad member had hit 65* and 23* in his previous two innings before falling short last time out.

Matty Potts: Three wickets last time out moved the 20-year-old to 13 wickets in nine games so far this season – at least three more than any of his Durham team-mates.

After a good start, Durham have won just one match so far in August – a seven-run win against Derbyshire, defending 160/5, a week ago. The game against Notts was abandoned and they then threw away a winning position to suffer a three-run defeat to Worcestershire Rapids. At 79/0 chasing 118 to win, they were cruising. Instead they came up short – finishing 114/6.

YORKS vs DUR Head to Head

Yorkshire Vikings, after winning both matches against Durham in the last season of Vitality Blast, have the better head-to-head record in this fixture. Tim Bresnan’s late-order batting and bowling earned the Vikings a ten-run win at Chester-le-Street, while it was the top order who shone in the reverse fixture. Adam Lyth (92), Harry Brook (44) and Jonathan Tattersall (53) led the Vikings to 200/3 and Durham could only reach 156/4 in reply.

Yorkshire Vikings are out of form but Durham are too this month and their most recent defeat was one of the worst of the lot given the commanding position they had been in. That will have hurt and Yorkshire can maintain their recent good record in this fixture by beating Durham this time.

Back Yorkshire Vikings to beat Durham at 1.72 with Bet365.
Bet Now

While Jonny Bairstow is listed in the Dream 11 game, the Yorkshireman is of course with the England squad. It means your actual choice behind the stumps is Jonathan Tattersall or Stuart Poynter. The Vikings’ gloveman bats higher than his Durham counterpart.

As with Bairstow, the batting is littered with Ashes players who must be avoided – Joe Root and Cameron Bancroft in this instance. Tom Kohler-Cadmore and Adam Lyth, at the top of the order, are two big dangermen for Yorkshire. For Durham, Scott Steel is excellent value at 8.5 credits, while Peter Handscomb could produce something big too.

Do not pick Ben Stokes, who like Bairstow, Root and Bancroft is playing at Lord’s. D’Arcy Short is 11 credits but every one of them given his form and consistency. Liam Trevaskis is brilliant value at eight credits given his wickets this season, meanwhile. That would allow one more all-rounder and David Willey, at 9.5 credits, could be worth backing.

Matty Potts was in excellent form for Durham last time out and has 13 wickets in this season’s competition. His good value leaves enough credits to gamble on Duanne Olivier and Dom Bess – both have been a little hit and miss so far.

D’Arcy Short is one of the finest T20 batsmen in the world and offers a bowling option too. It makes him one of the games’ most dangerous players and would be a worthy pick as captain. David Willey has wickets and runs for Yorkshire, meanwhile – he will bat up the order, all being well. 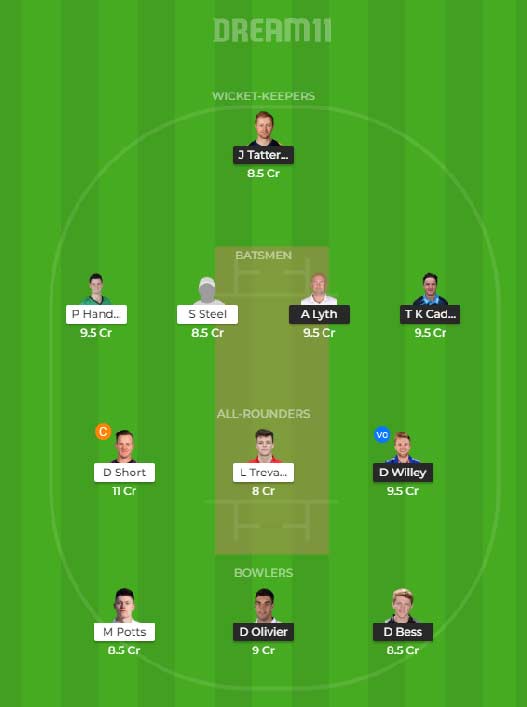 Who will win YORKS vs DUR?

Bet on Yorkshire vs Durham Match