Our Pick Barbados Tridents are favorites to win

There is a place in the Caribbean Premier League 2019 final, and a showdown with Guyana Amazon Warriors, awaiting the winner of the second qualifier between Trinbago Knight Riders and Barbados Tridents. The match will take place on October 12 and the live action is scheduled to begin at 19:00 local time.

Trinbago Knight Riders arrested an alarming slide in form just in time to keep their title defence alive. They had now won since starting the tournament with four victories in a row, but an excellent bowling performance and Lendl Simmons’ half-century helped them see off St Kitts & Nevis Patriots in the eliminator.

Barbados, meanwhile, surged up the table with a late run of form – instigated in particular by the bowling of Harry Gurney and Hayden Walsh Jr – but they came unstuck in the qualifier when Brandon King fired Guyana Amazon Warriors into the final. Nevertheless, this is another chance for the Tridents to reach the final, against a team they beat twice during the league phase.

TKR vs BT, CPL 2019:Where to watch/Live streaming

Barbados have lost the toss in each of their last two matches, including against Trinbago. They are due to win this one and, having been asked to field first in each of the last two games, they may choose to this time on a wicket offering more to the bowlers than the previous two.

Heavy rain and thunderstorms are forecast throughout the day in Trinidad, and the Brian Lara Cricket Academy is set to get a soaking. If it clears, it will only be later in the evening.

The Brian Lara Cricket Academy wicket, used for the finals of the previous two Caribbean Premier League seasons too, has tended to be well-balanced. It gives something to the bowlers, with scores of 160 above par looking at the record books.

Sunil Narine’s return from injury was timely ahead of the play-offs. He took 2-10 from four overs and, while his batting did not match, he is a much bigger influence in the side than Mark Deyal. Seekkuge Prasanna also played, with Jimmy Neesham missing out.

Lendl Simmons: Anchored the chase against St Kitts & Nevis Patriots last time out with a patient 51 at the top of the order. He also scored 60 when these teams last met and has five half-centuries in this season’s tournament in all.

Kieron Pollard: Smashed an unbeaten 26 from just nine balls last time out, including three sixes, as his good form continued. He has scored 71, 20, 36* and 26* in his last four innings.

Sunil Narine: His injury had been costly as Trinbago Knight Riders slipped down the table in his absence, but the spin-bowling all-rounder showed exactly what he is capable of as he took 2-10 from four overs on his return last time out.

Trinbago Knight Riders lost five of their last six league games, with the only other match a no result, but got back to winning ways in the play-offs.

Their final league game was a seven-wicket defeat to Guyana Amazon Warriors but their bowlers helped them bounce back against St Kitts & Nevis Patriots. Chris Jordan took 3-30 and Sunil Narine 2-10 as the Patriots were restricted to 125/7, before Lendl Simmons’ half-century led Trinbago Knight Riders to a six-wicket win with eight balls to spare.

As expected, Shai Hope returned from injury last time out – replacing Justin Greaves to bolster an already improved Barbados Tridents line-up. Harry Gurney and Shakib Al Hasan have joined the team late in CPL 2019 season, while Dan Christian did too but has not featured – it is no surprise the Tridents promptly rose up the table.

Johnson Charles: Scored half-centuries in both matches against Trinbago Knight Riders during the group stage as he finished that phase of the tournament in good batting form. He will be keen for another in this final qualifier.

Harry Gurney: Wicketless last time out, but he took nine in his five previous matches to show why he has become a key T20 player in the various leading franchise tournaments across the globe.

Hayden Walsh Jr: Took 5-19 in one of Barbados’ wins against Trinbago Knight Riders this season, while his two wickets in the first qualifier took him to 19 wickets in seven matches so far this season.

Barbados won three of their four final league matches, including a seven-wicket victory – after Johnson Charles’ half-century helped them chase 135 – against Trinbago Knight Riders in their last league game.

They could not carry that form into the first play-off match, however – the Tridents reaching 188/8 in reply to Guyana Amazon Warriors’ 218/3 at Providence Stadium.

TKR vs BT Head to Head

Barbados Tridents won both matches against Trinbago Knight Riders in the league phase of this year’s tournament to move to six wins in 14 games overall. In the first meeting, JP Duminy smashed 65 from 20 balls after Johnson Charles (58) and Jonathan Carter (51) had also hit half-centuries as Barbados posted 192/5. In reply, Hayden Walsh claimed 5-19 to help bowl the Knight Riders out for just 129.

Next up, Harry Gurney, Shakib Al Hasan and Walsh all took two wickets as the Knight Riders were restricted to 134/8. In reply, the Tridents – led by Charles’ half-century – claimed a seven-wicket win with two balls to spare.

Trinbago Knight Riders are defending champions and go into this match as favourites as a result. Barbados beat them twice in the group stage and finished strongly, however – they could still cause an upset.

Trinbago Knight Riders are favourites to beat Barbados Tridents but the Tridents beat them twice in the group stage and are definitely capable of upsetting the odds again.

Back Barbados Tridents to beat Trinbago Knight Riders at 2.10 with Bet365 and 2.00 with Betway.

Johnson Charles was in good form in both matches against the Knight Riders and is well worth picking up at nine credits as a result. Shai Hope is fit again, so his price of 9.5 credits could be generous if he hits top form. Charles looks the safer bet if you only pick one, however.

In-form Lendl Simmons scored half-centuries in each of the last two matches and has five in all in this year’s competition. He is ten credits but has proved to be worth that and more. Kieron Pollard, meanwhile, has also been in good batting form – albeit further down the order. Given he has picked up wickets too, he is a great price at 9.5 credits as well. Alex Hales showed signs he is getting back to his best form too, with a breezy knock for the Tridents last time out.

Onto the all-rounders, and Sunil Narine’s return from injury was key for the Knight Riders last time out. JP Duminy is excellent value at nine credits given the batting impact he has had, meanwhile, and Shakib Al Hasan’s arrival has undoubtedly bolstered the Tridents with bat and ball. Captain Jason Holder has amassed more than 500 points too, but at 9.5 credits you may be best holding something back for the bowlers.

Onto those bowlers then, and Harry Gurney and Hayden Walsh have been integral to the Tridents’ upturn in form. They cost nine and 8.5 credits respectively but both are must-pick players. For the Knight Riders, Chris Jordan was their top man last time out and he is good value at 8.5 credits. That possibly leaves just eight credits, which is the cost of Akeal Hosein with the ball or Ashley Nurse with the bat.

Johnson Charles has scored half-centuries in both matches against the Knight Riders this season, while Lendl Simmons scored one against the Tridents and has five in total in this campaign. There is no doubt both are in good, consistent form and could make good captain/vice-captain picks. With the ball, Harry Gurney and Hayden Walsh Jr have been key wicket-takers. The latter in particular has been a sure bet for wickets in this year’s tournament. Then there all-rounders like Sunil Narine and Shakib Al Hasan who can never be counted out with bat or ball. Walsh’s consistency could make him a good captain pick, while one of those two all-rounders is worth a punt for vice-captain. 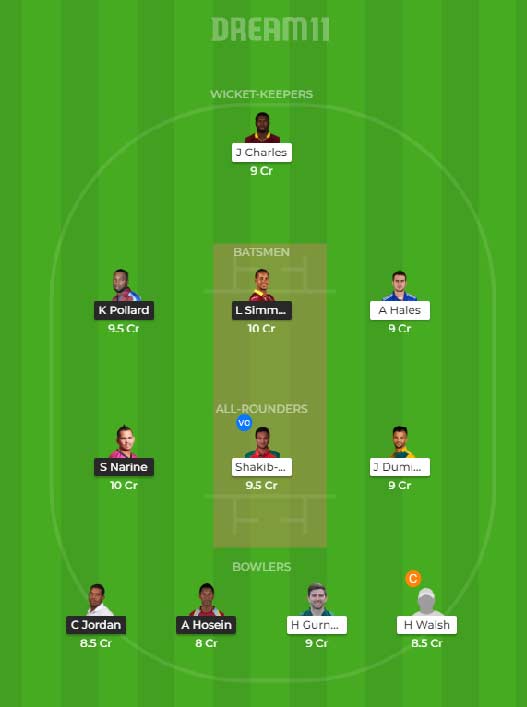 Who will win TKR vs BT QF2?