Our Pick Sri Lanka are favorites to win

Who will win Sri Lanka vs New Zealand, 2nd Test?

After a winning start to their first ICC World Test Championship fixtures, Sri Lanka can wrap up a series win against New Zealand when they meet at the P.Sara Oval, Colombo, between August 22 and August 26. The live action starts at 09:30 every day.

Dimuth Karunaratne earned Sri Lanka victory first up, scoring a second innings century to lead a chase of 268 to beat the tourists by six wickets in Galle. It was a marked improvement on their heavy defeat to New Zealand away in December.

New Zealand will want to get back to that sort of form in the pursuit of World Test Championship points, having won their last five test series. All were at home, however – they have lost their last two away series and this would be three in a row.

SL vs NZ, 2nd Test: Where to watch/Live streaming

New Zealand won the toss in the first test and they could choose to bat first again in this test if their luck holds with extra pace and bounce on offer at the P.Sara Oval.

With thunderstorms scheduled throughout the week in Colombo, weather conditions are not favourable for this test – there is a strong chance of rain forecast on every day at the moment.

The most historic but now lesser used of Colombo’s test venues, the P.Sara Oval has traditionally played in a less-Sri Lankan way – in other words, there is more pace and bounce than other venues.

After winning the first test, the balanced Sri Lankan side could be retained for the second test. Dimuth Karunaratne led the team from the front with the bat.

Dimuth Karunaratne: The Sri Lankan captain led from the front by scoring 122 in the second innings of the first test, including a 161-run opening partnership with fellow opener Lahiru Thirimanne, to set them on their way to victory.

Suranga Lakmal: Took his tally to 141 wickets in 58 tests in the first match of this series, after claiming 4-29 from his 15.2 overs in the first innings. He also hit some useful lower-order runs with the bat too.

Angelo Mathews: Back in the test team and marked that fact with a half-century in the first innings at Lord’s and an unbeaten 28 in the second to seal victory. It was his 34th test 50, to complement his nine hundreds in 81 matches.

Sri Lanka are looking to make it two consecutive test series wins after beating South Africa 2-0 in their most recent tests. Victory in the first test of SL vs NZ 2019 series was their 3rd test wins in a row; Dimuth Karunaratne hit a second innings century to set up a six-wicket win.

Todd Astle, Colin de Grandhomme, Tom Blundell and Neil Wagner were the four to miss out last time out. An option like De Grandhomme would offer batting further down the order and William Somerville could make way from this spin-heavy attack.

Kane Williamson: Missed out in the first test but the New Zealand captain is the third best batsman in the ICC world test rankings for a reason. He has 20 test centuries to his name from 73 innings and an average of 52.50.

Henry Nicholls: Scored 162* against Sri Lanka when New Zealand last beat them in December and he sits fifth in the world test rankings. He could not capitalise on good starts last time out and will be keen to put that right.

Trent Boult: The opening bowler’s next wicket will be his 250th in test cricket in his 63rd match. He took three across the first test and bowled tightly too.

New Zealand had won their five previous test series but they were all at home. Their first away series since defeats to India and South Africa could instead be heading the same way as those matches. They may have felt they had a chance after setting Sri Lanka 268 to win the first test, but they had no answer to a superb opening partnership which eventually set up a six-wicket win.

SL vs NZ Head to Head

Sri Lanka’s first test win was their ninth in 35 previous test against New Zealand. New Zealand lead the way with 15 wins, but there have also been 11 drawn matches.

New Zealand won their last series against each other, back in December, when Tom Latham (176) and Henry Nicholls (162*) led them to 585/4 declared in the second innings of the second test. The first test had been drawn, but they bowled Sri Lanka out for 236 to claim a massive 423-run victory.

Despite Sri Lanka’s win in the first test, New Zealand are favourites to win the second test.

Sri Lanka have given themselves a great chance of sealing a series win and they could upset the odds if they back up their first-test performance.

Kusal Perera, BJ Watling and Niroshan Dickwella are your choices behind the stumps. Perera has been in good recent form, while Dickwella and Watling showed their best form in flashes in the first test. All three are good options.

Kane Williamson and Ross Taylor have something to prove in this match, which could swing the game New Zealand’s way if they get back to form. That is a gamble, given their cost, however. Dimuth Karunaratne starred in the first test for Sri Lanka and Angelo Mathews appeared to be back in good form too. Henry Nicholls and Tom Latham were excellent on home soil in this fixture in December, meanwhile, and Lahiru Thirimanne shared the excellent opening partnership with Karunaratne last time out. Picking 3-6 of those is a tough selection.

There is much less choice on the all-rounder front. Limiting it to one of Dhananjaya de Silva, Mitchell Santher and Colin de Grandhomme is sensible. The Sri Lankan scored higher than Santner last time out, while De Grandhomme is pushing for selection this time out.

Trent Boult is bidding for his 250th wicket and looks a good bet, while Akila Dananjaya and Ajaz Patel both caught the eye in the first match. Suranga Lakmal did likewise and Lasith Embuldeniya could be a good value pick too depending on how you have played it so far.

For Dream 11 captain, the Sri Lankan captain could be your best option. Dimuth Karunaratne hit a match-winning century in the first game. Kane Williamson is New Zealand’s top-ranked test batsman and he could be worth a vice-captain pick if he leads the response this time out. 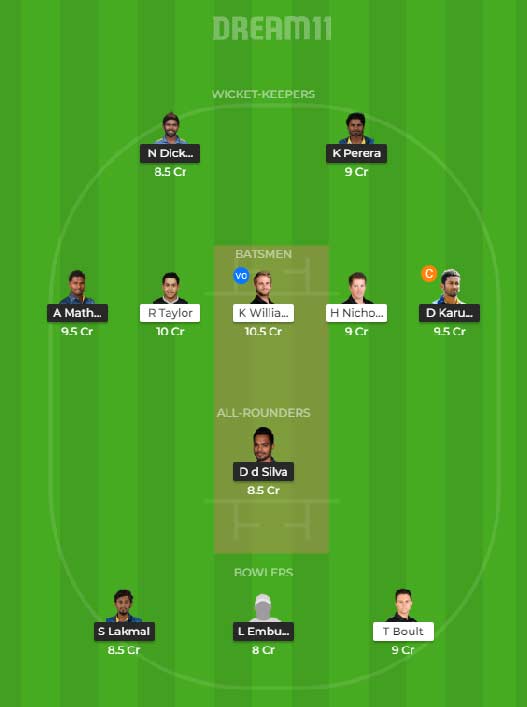 Who will win SL vs NZ 2nd Test?