Our Pick Middlesex are favorites to win

North Group runners-up Notts Outlaws take on South Group third-placed team Middlesex in one of the four quarter-finals of the 2019 Vitality Blast. The match will take place at Trent Bridge, Nottingham, on September 5 and the live action is scheduled to stat at 19:00 local time.

The Outlaws, champions in 2017, have been led by the batting of former England opener Alex Hales – who has top-scored with 283 runs in ten innings – and the bowling of Big Bash winner Harry Gurney, who has claimed 18 wickets.

Middlesex, meanwhile, showed why their batting order is considered to be one of the best in the competition when they beat Somerset to qualify for this game. Eoin Morgan, Dawid Malan, Paul Stirling and AB de Villiers all contributed to their record chase of 227 in 17 overs. Middlesex, as a result, have the momentum going into this quarter-final.

NOTTS vs MDX, Vitality Blast 2019: Where to watch/Live streaming

Trent Bridge is a bat first wicket in normal circumstances and the Outlaws will want to put a big score on the board in front of their home fans.

There is practically no chance of rain on Thursday evening, with sun forecast – albeit the temperature will get no higher than 16 degrees.

Trent Bridge has favoured batting though the World Cup showed that good, fast bowling can combat the obvious advantages afforded to the batsmen.

Imad Wasim returned for the final group game – the home defeat to Durham – and could feature ahead of Luke Wood and Jake Ball for this final group game. That has generally been the only Outlaws’ position not settled, particularly since Luke Fletcher’s return to the team.

Alex Hales: Top-scored in the group stage for the Outlaws with 283 runs in ten innings, which included three half-centuries. The danger he poses at the top of the order is well known, particularly at Trent Bridge.

Dan Christian: The hugely experienced captain (and another of the Renegades’ champions), the Australian all-rounder has scored 168 runs in nine innings and claimed seven wickets in seven bowling innings.

Notts Outlaws’ North Group campaign ended in frustration – a rained-off game against Worcestershire Rapids, after a run of three straight wins, followed by a heavy home defeat to Durham.

Having won six of their group games, they could not add a seventh after being bowled out for 124 in reply to Durham’s 171/8.

With Mohammad Hafeez away, Mujeeb Ur Rahman is back in the Middlesex squad for T20 blast quarter-finals. He will bolster a bowling unit that came in for some punishment last time out but Middlesex are unlikely to make any other batting changes given how their top-order fired in the win against Somerset.

Eoin Morgan: England’s World Cup-winning captain was in sublime form last time out, smashing five fours and eight sixes in a 29-ball knock of 83 not out as Middlesex beat Somerset to reach the last eight.

AB de Villiers: Scored 32 from 16 balls last time out and he has 337 runs in total from seven innings, including four half-centuries. Not only that, but he also boasts a phenomenal strike rate of 185.16.

Dawid Malan: The Middlesex captain has scored 488 runs in 13 innings so far – only two players have scored more than him in this year’s tournament and both (Babar Azam and Tom Banton) ply their trade at batsman-friendly Taunton.

Middlesex put a run of three straight defeats behind them to book their quarter-final place in record-breaking fashion. Set 227 to beat Somerset, with only Toby Roland-Jones (2-32) managing to keep a good lid on the batting, Middlesex rose to the challenge. Dawid Malan (41 from 14 balls) set the tone before AB de Villiers (32 from 16) kept the run rate high. Eoin Morgan then went ballistic, with his unbeaten 83 from 29 balls sealing a stunning six-wicket win.

Notts vs MDX Head to Head

This will actually be the first time Notts Outlaws have ever played Middlesex in T20 cricket, with the two teams never having drawn each other in the knock-out stages before.

Bet365 are split on these two, with Notts generally the better team in the group stage but the momentum having swung Middlesex’s way after their most recent match. Betway have leaned towards Middlesex.

Notts Outlaws have home advantage but Middlesex have the momentum after their stunning final group game win. If that top order fires again, on a batsman-friendly wicket, it is hard to look past another Middlesex victory.

John Simpson and Tom Moores are the two wicket-keepers to have featured for their respective teams so far. Simpson’s batting chances will be limited by the strength of their top order, so Moores – who is the same price at 8.5 credits – could be the better pick.

There is so much choice when it comes to quality batsmen in this game, but their cost could be prohibiting. AB de Villiers is 11 credits, Dawid Malan is ten and Eoin Morgan is 9.5 for Middlesex. For the Outlaws, Alex Hales is ten credits, Ben Duckett is 9.5 credits and Joe Clarke is nine. All six have been in great form this season and the Middlesex trio were excellent last time out too. Realistically, given the price of the best players elsewhere, you should be able to afford four of them.

There is quality in the all-rounders department too, though Toby Roland-Jones is comfortably the top scorer of those listed. The Middlesex paceman will lead their bowling attack and is good value at nine credits. Paul Stirling is the same price, but his batting can be inconsistent despite his obvious quality.

Harry Gurney is in excellent form but represents great value at just nine credits, while you need to balance the expensive batting options with bargains with the ball – step forward, Matthew Carter and Nathan Sowter at eight credits apiece. Steven Finn and the returning Mujeeb Ur Rahman are both good value at 8.5 credits each, meanwhile.

Dawid Malan’s runs or Harry Gurney’s wickets? Or maybe the big-hitting brilliance of Eoin Morgan and AB de Villiers. All four would make good choices for your Dream 11 captain if they hit their top form. Gurney has picked up wickets consistently and could be the safer option, while De Villiers is the dangerman if he hits his best batting form and may just edge the others as vice-captain. 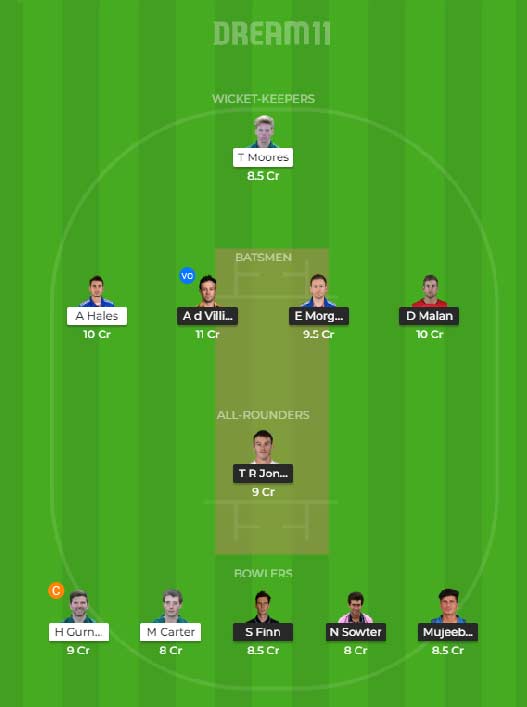 Who will win NOTTS vs MDX 2nd Quarter Final?

Bet on Nottinghamshire vs Middlesex Match