Who Will Win Nottinghamshire vs Durham, Vitality Blast 2019?

Nottinghamshire Outlaws will look to extend their winning momentum while Durham Jets will look to bow out of the tournament on a high when the two teams lock horns on August 30. The Trent Bridge in Nottingham will host this North Group fixture of the Vitality T20 Blast 2019. Live telecast of the match is scheduled to begin at 6:30 PM local time.

Nottinghamshire have already qualified for the knockout round. They will be seeking their fourth win on the bounce and would want to take enough momentum with them into the quarter-finals. Their previous fixture - against Worcestershire Rapids the other day at Worcester - had to be called off due to rain without a ball bowled. Durham, on the other hand, have had a very disappointing tournament this year and they cannot possibly make it past the group stage now even if they win this match which will be their final game of the season. They will be going into this game on the back of a seven-wicket loss in the rain-affected encounter against the Birmingham Bears.

NOTTS vs DUR,  Vitality Blast 2019: Where to watch/Live streaming

No rain has been forecast for this match with the skies likely to remain clear on Friday evening. The weather should be cool throughout the duration of the game with temperatures expected to be between 17 and 21 degrees Celsius. Humidity should be around 54-73% with a moderate breeze blowing across the stadium.

The pitch at the Trent Bridge has been pretty good for batting with 150+ being scored on four occasions in the five completed matches that have been played here in this year's T20 Blast. However, it does tend to get a bit slower as the game progresses and that is evident from the fact that the side batting first at this ground has won four times out of five this season.

At the Trent Bridge this season, the side batting first has had more success than the side batting second. And also since bowlers have found a little more assistance from the wicket here during the second period of play, the team that wins the toss in this match is more likely to bat first.

Nottinghamshire made only one change to their line-up in the previous match against Yorkshire in T20 Blast 2019- they brought all-rounder Luke Wood in place of fast bowler Jake Ball. With Wood returning expensive figures, the team might consider bringing Ball back for this upcoming encounter against Durham. Jake Libby was sent ahead of Tom Moores and Daniel Christian last time and his impressive performance with the bat means that he could continue at number four. Nottinghamshire are unlikely to tinker with their opening combination of Joe Clarke and Alex Hales. Ben Duckett will probably continue to bat at number three while off-spinner Matthew Carter could be given the ball again in the powerplay.

Alex Hales: The England international has scored 275 runs this Vitality Blast which is the most by any batsmen from Nottinghamshire. Hales smashed a half-century last week against Leicestershire - his third of the season - and the opening batsman will be expected to take the team off to a flying start on Friday.

Joe Clarke: Alex Hales' opening partner Joe Clarke has also made vital contributions with the bat this year. He has scored 247 runs so far which includes a couple of fifties - against Birmingham Bears and in the previous match against Yorkshire - both of which have been struck at this very ground.

Harry Gurney: With 17 wickets in 9 matches at an economy of 8.66, Harry Gurney is one of the tournament's top ten bowlers this season. The left-arm quick notched up a fifer against Derbyshire last month and has picked up four wickets in his last two matches. Gurney's knack of striking early makes him a big threat in the powerplay.

With six wins, three losses and four washouts from thirteen matches, Nottinghamshire Outlaws are currently second on the North Group points table with 16 points and have already booked their ticket to the quarter-finals. They have secured wins in their last three completed fixtures on the bounce - against Birmingham Bears by 28 runs (D/L method) before beating Leicestershire Foxes and Yorkshire Vikings by seven wickets and three runs respectively. Nottinghamshire played their previous match against Worcestershire with whom they had to share points as the game ended in a washout.

Durham dropped fast bowler Brydon Carse after his expensive returns of 0-23 from two overs against Yorkshire and replaced him with medium pacer James Weighell in the last match against Birmingham Bears. Although Weighell ended up conceding 19 runs off the one over that he bowled, he might be given another opportunity considering the team now has nothing to lose. Durham do not have any injury scares ahead of this game and they are expected to go in with an unchanged line-up.

D'Arcy Short: The Australian all-rounder has been an asset to the Durham Jets this season. Short is currently third on the tournament's runs charts with 447 runs at an average of 44.70. He has cracked four half-centuries including the 39-ball 50 last time out against Birmingham Bears. He took key scalps of Dominic Sibley and Sam Hain in that game and that has taken his wickets tally to 11 in as many matches.

Peter Handscomb: The wicketkeeper-batsman has arrived just recently and has scored 44 runs in his first two appearances in this year's Vitality T20 Blast. Durham's skipper looked in good touch in his 18-ball 25 last time against the Bears and he will be expected to score big this time around.

Matthew Potts: The pacer has been the most successful bowler for Durham this season with 15 wickets in 11 matches at an economy of 8.76. Potts was the pick of the lot in the recent match against Worcestershire with figures of 3-22 and the team will want him to deliver a similar performance on Friday.

Durham have struggled to win games in this 2019 edition of the Vitality Blast. They currently find themselves second from the bottom in their group standings with four wins, seven defeats and a couple of rained-out games from the thirteen they have played so far. Durham have not won consecutive games this season and they have not been able to find consistency right from the start of the tournament. They have suffered defeats in their last three completed matches - against Worcestershire by three runs, then against Yorkshire by 14 runs before going down by seven wickets to Birmingham Bears in their most recent encounter.

Notts vs DUR Head to Head

Nottinghamshire Outlaws and Durham Jets have played 28 matches against each other in the English domestic twenty20 tournaments. While the former have won 13 of those, the latter have won 10 with the remaining 5 all having ended in no results.

Durham have won three of the last five completed matches that they have played agaisnt Nottinghamshire in the shortest format of the game, including both the encounters of the previous season.

The most recent face-off between these two teams - in the first clash of the ongoing season earlier this month at the Riverside Ground in Chester-le-Street - ended in a washout.

Nottinghamshire Outlaws and Durham Jets have had contrasting campaigns in this year's T20 Blast. While the former have been one of the more consistent teams and are carrying plenty of momentum with them, the latter have looked out of sorts all through the season and are coming off three consecutive defeats.

Durham do have the upper hand in the fact that they won both their encounters against Nottinghamshire last year. However, they are struggling to fire together as a unit and their top-order batting seems heavily dependent on D'Arcy Short. This has not been the case with Nottinghamshire, most of whose players have been doing a good job in their respective departments. They also have the advantage of playing at their home ground and have beaten Durham here eight times out of twelve. Nottinghamshire are the in-form team at the moment which is why we are backing them to secure a couple more points on Friday.

Our Dream11 team for this match consists of seven players from Nottinghamshire and four from Durham.

We have picked two players under the wicketkeepers category - Joe Clarke of Nottinghamshire and Peter Handscomb of Durham. Both are available for 9 credits and have the ability to score big.

Our Dream11 team has three batsmen - Alex Hales and Ben Duckett of  Nottinghamshire and Harry Adair of Durham. Hales has been the best batsman for his side this season and is worth the bet at 10 credits. Duckett and Adair can be picked at 9.5 and 8 respectively.

We have picked an all-rounder from both the teams - Daniel Christian from Nottinghamshire and D'Arcy Short from Durham. Short is the most expensive player for this game and he has been priced at 11 credits on the Dream11 app. However, his ability to make an impact with both bat and ball makes him a valuable player. Christian can be picked for 9.5 credits.

We have picked three bowlers from Nottinghamshire - Jake Ball, Harry Gurney and Matthew Carter - along with one from Durham - Matty Potts. Gurney is one of the leading wicket-takers this Vitality Blast and is worth picking at 9 credits. Carter can be picked at 8 credits while Ball and Potts are both available for 8.5.

We have selected Alex Hales as the captain of our Dream11 team.

D'Arcy Short is the vice-captain of our team. 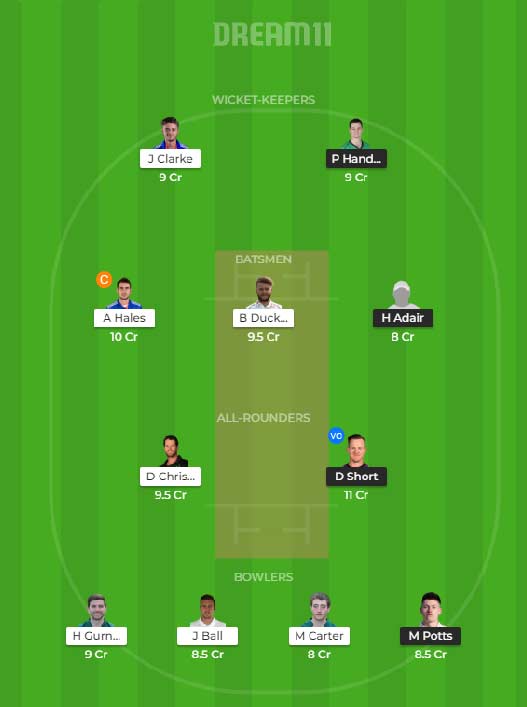 Who will win NOTTS vs DUR?

Bet on Nottinghamshire vs Durham Match