Our Pick Northern Warriors are favorites to win

Who will win Maratha Arabians vs Northern Warriors, T10 League 2019?

Defending champions Northern Warriors get the 2019 T10 League underway with a fixture against Maratha Arabians – who they beat in the eliminator play-off of last season’s tournament. This year’s tournament takes place in Abu Dhabi, at the Sheikh Zayed Cricket Stadium, and this Group B fixture is the first on the schedule at 16:30 local tome on November 15.

The Warriors had Nicholas Pooran to thank for their win when these teams last met, though he was set to miss the start of this tournament due to international commitments with the West Indies against Afghanistan in Lucknow. His international suspension, after being caught ball tampering, could bring forward his arrival in Abu Dhabi, however.

He is not the only player absent from this match because of that series, with team-mates Lendl Simmons and Karim Janat and the Arabians’ Hazratullah Zazai and Najibullah Zadran all away.

Fielding first is the norm when winning the toss in this competition. Northern Warriors won the toss both times these teams met last season, so the Maratha Arabians are due this one.

Conditions will be perfect – zero chance of rain and temperatures in the high-20s all day in Abu Dhabi.

More balanced than some of the other UAE wickets, the Sheikh Zayed Cricket Stadium offers something to the bowlers but is still a good pitch for batting on.

Led by Dwayne Bravo, and calling on the experience of the likes of Lasith Malinga, Yuvraj Singh and Adam Lyth as well, Maratha have turned towards icons of the game. Bravo’s fitness is not known, however – he missed the CPL with injury. Maratha Arabians will have to do without Afghanistan duo Hazratullah Zazai and Najibullah Zadran at the start of this tournament too. Both are on international duty. Pakistan’s decision to withdraw the NOCs they issued for this tournament means Mohammad Irfan’s participation is also in doubt.

Chris Lynn: Signed as the Maratha Arabians’ icon player, it is easy to see why – in T20 cricket he has a strike rate of 141.96 and he scored plenty of runs at the top of the order for Winnipeg Hawks and Kolkata Knight Riders in his last two T20 ventures.

Lasith Malinga: The veteran slinger has turned his back on anything longer than T20 cricket now. His T10 credentials should be good, with his ability to change up his pace and bowl yorkers. In T20 cricket, he has 387 wickets and an economy rate of only a fraction above seven-an-over.

Dwayne Bravo: After he missed the Caribbean Premier League with a finger injury, his availability would be big news for the Arabians. He took ten wickets in last year’s tournament and can throw the bat too.

Maratha Arabians lost in the eliminator last season. They won one of their initial three group games but two victories in the second phase put them through in third place. They then beat Bengal Tigers with Dwayne Bravo (4-16) and Alex Hales (87*) in fine form but lost the Warriors in the second play-off – their score of 72/8 always likely to be below par as they suffered a ten-wicket defeat. They then lost the 3rd-place play-off by six wickets, despite Adam Lyth’s 24-ball half-century.

Lendl Simmons is on international duty for the start of the T10 League, and Nicholas Pooran was supposed to be – though his international ban could change his plans. Karim Janat is in the Afghanistan squad against whom West Indies are playing, meanwhile. Wahab Riaz is another to have had his NOC withdrawn, so his participation is in doubt. The team still has plenty of flair, with Darren Sammy, Andre Russell and Rayad Emrit all involved.

Andre Russell: ‘If fit’ is the constant disclaimer attached to Dre Russ but the all-rounder is a key player if he is available, there is no doubt of that. His T20 strike rate of 170.02 – and the fact he has hit 394 sixes in 257 innings – shows exactly why.

George Munsey: The big-hitting Scottish opener is one of the top associate players set for the T10 League. He showed good form in helping Scotland qualify for the T20 World Cup when he was last in the UAE last month. His T20 strike rate is 159.78.

Chris Green: The South African-born Australian all-rounder was one of Guyana Amazon Warriors’ key players as they showed amazing form at the Caribbean Premier League, only to lose in the final. His off-spin can be economical and profitable.

Northern Warriors are the defending T10 champions, having won last year’s competition by beating Pakhtoons in the final. Nicholas Pooran was one of their key players, scoring 324 runs, while Hardus Viljoen picked up 18 wickets. In the final, however, it was Rovman Powell who top-scored with 61* and Chris Green who led the bowling with 2-11 from two overs.

MA vs NW Head to Head

Northern Warriors beat Maratha Arabians twice on their way to the T10 title in their debut season last time out. Nicholas Pooran was their top-scorer in both matches – hitting 62 from 24 balls as they chased 95 to win the league game by eight wickets and then hammering an unbeaten 43* as they took just five overs to reach 74/0 and win the eliminator play-off by ten wickets. Hardus Viljoen had earlier taken three wickets in both games.

Betway have listed defending champions Northern Warriors as 1.83 favourites to win their opening game of the new T10 season against Maratha Arabians. The Arabians, who lost both matches against Northern Warriors last season, are 1.90 to win with Betway.

Northern Warriors are defending champions and, with or without Nicholas Pooran, will be keen to make a winning start to the new T10 season.

Back Northern Warriors to beat Maratha Arabians at 1.83 with Betway.
Bet Now

With Nicholas Pooran’s participation unknown – he was not set to be part of this squad for the start of the tournament but is now suspended for four international games – Sam Billings and Chadwick Walton are safer options behind the stumps. At just 8.5 credits, Walton could be a bit of a steal. Billings could be a key top-order batsman too, however.

In addition to Billings and Walton, Chris Lynn and George Munsey are almost certain to be key top-order batsman for their respective teams. Both have phenomenal strike rates in T20 cricket and will be expected to carry that over to T10 too. Lendl Simmons and Hazratullah Zazai are on international duty, but Yuvraj Singh is a big-name signing and Adam Lyth scored a half-century on his only appearance last season.

Both Andre Russell and Dwayne Bravo will be key players if they are passed fit, but both have had injury troubles of late. Russell will be hugely important if he does play though – his phenomenal hitting and excellent bowling make him a key player wherever he goes. Picking both could be too great a gamble, and Chris Green might be a safer bet at 8.5 credits.

Only picking one would also ensure you have enough in the bank to make Lasith Malinga part of your bowling attack. He is a must-pick and will be expected to pick up wickets again. Indian veteran Pravin Tambe was a surprise bowling star of last year’s tournament for the Warriors, meanwhile, and he and team-mate Rayad Emrit both look good value at 8.5 credits apiece. Beyond them, Wanindu Hasaranga and Mitchell McClenaghan can be classed likewise.

If he plays, Andre Russell could be key with bat and ball and would make an excellent pick as captain. Chris Green is also listed as an all-rounder but will be more prominent as a bowler. With that in mind, perhaps Chris Lynn – as a big-hitting, top-order batsman – could be a better vice-captain pick. 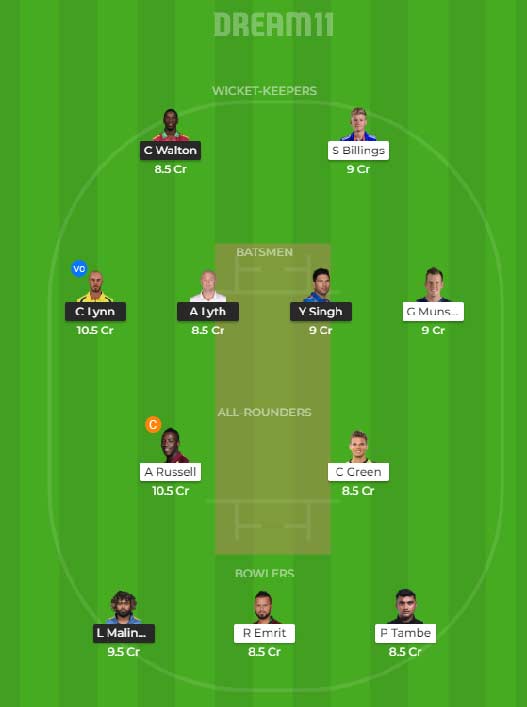