Our Pick Kent are favorites to win

Who Will Win Kent vs Gloucestershire, Vitality Blast 2019?

In their bid to move one step closer to the quarter-finals, Kent Spitfires and Gloucestershire will lock horns in this South Group fixture of the Vitality T20 Blast 2019. The match will be played on August 29 at the St Lawrence Ground in Canterbury. Live telecast is scheduled to begin at 7 PM local time.

Gloucestershire and Kent currently have 14 points in their kitty and a couple more points here will really bolster their chances of qualifying for the knockout round. While the former are coming on the back of a convincing 25-run victory over Somerset at Bristol, the latter suffered defeat in their previous match against Surrey at Canterbury by the narrowest of margins - 1 run. Gloucestershire, after putting up a challenging 189 on the board, bowled Somerset out for 164. Kent were given a stiff target of 172 by Surrey and they came so close to it finishing at 170/3 in their 20 overs.

KENT vs GLO, Vitality Blast 2019: Where to watch/Live streaming

It is likely to be a cool and clear weather on Thursday evening with a gentle breeze blowing across the ground. Temperatures are expected to be in the range of 15-19 degrees Celsius. Humidity should be around 61-81% and the chances of precipitation are very low.

The St. Lawrence Ground has hosted three completed matches so far in this year's Vitality Blast and has seen scores of 150+ on five occasions (thrice by the side batting first and twice by the side batting second). This goes to show how good the wicket has been for batting and a similar surface is expected to be prepared for this game.

The toss-winning team has batted first and gone on to win in each of the three completed matches that have been played at this ground so far this season. The pitch has seemed to become a tad slower during the second-half of every game and so the team that wins the toss here on Thursday is likely to go with the trend of batting first.

Kent Spitfires have roped in batsman Faf du Plessis for the remainder of the Vitality T20 Blast 2019. The South African skipper will be available for selection for Thursday's match against Gloucestershire and could replace fellow countryman Heino Kuhn at the top of the batting order. In the previous match against Surrey, Kent made three changes to their side - they replaced Mohammad Nabi, Adam Milne, Mitchell Claydon with Marcus O'Riordan, Matt Milnes and Imran Qayyum. Daniel Bell-Drummond and Zak Crawley will continue to open the batting while Fred Klaassen and Matt Milnes are likely to lead the team's bowling attack again.

Daniel Bell-Drummond: With 305 runs in 10 matches, Daniel Bell-Drummond is the leading run-getter for Kent in this year's Vitality T20 Blast. The opening batsman has cracked three half-centuries in his last four innings. One of those came in the reverse encounter against Gloucestershire and the in-form batsman will be expected to make another 50+ score when the two teams face-off again.

Faf du Plessis: The South Africa captain has scored 4903 runs in 204 T20s and Kent will bank on his vast experience when it comes to batting. The world-class batsman has a hundred and 29 fifties in the shortest format and he struck 55 runs off just 20 balls in his last outing while playing for Edmonton Royals at the recently concluded Global T20 Canada.

Hardus Viljoen: He is currently the tournament's third-best bowler having picked up 18 wickets at an economy of 7.36. The South African fast bowler has taken seven wickets in his last four matches. Viljoen took 2-30 in the reverse fixture against Gloucestershire and he will be a big threat for them again.

Kent Spitfires have played twelve matches so far in this year's T20 Blast out of which they have won six and lost four with the remaining two having ended in no results. They are currently positioned third on the South Group points table with 14 points and need a couple more points to strengthen their case for a place in the quarter-finals. After their four-wicket win over Hampshire at Beckenham, Kent suffered back-to-back losses - against Gloucestershire and Somerset - before their next two fixtures got washed out. Their previous encounter came against Surrey last week which they lost by one run.

Gloucestershire made the just the one change to their side last time out against Somerset, dropping all-rounder Zak Chappell for another all-rounder Graeme van Buuren. The latter had a good outing with the ball in that game and he could be retained in the eleven for this upcoming encounter against Kent Spitfires. Michael Klinger, who played probably his final innings at the Bristol County Ground last time, will open the batting alongside Miles Hammond with wicketkeeper James Bracey slotted at number three. David Payne and Andrew Tye are likely to be Gloucestershire's new-ball bowlers.

Miles Hammond: The local boy has scored the most runs for his team this season - 240 runs which includes a couple of half-centuries. The left-handed opener is having a strike-rate of close to 145 and has four good knocks in his previous five innings, including the 42-ball 54 against Somerset last time out.

David Payne: The left-arm fast bowler has been the most impressive player for Gloucestershire in the bowling department having taken 12 wickets at a pretty good economy of 7.05. He returned figures of 2-25 from four overs in the reverse encounter against Kent earlier this month.

Andrew Tye: With 11 wickets in 10 matches at an economy of 8.02, Andrew Tye is another key man in Gloucestershire's bowling attack. The Australian quick took 2-24 against Kent and is coming off 2-35 in the most recent encounter against Somerset at Bristol. The team will want him to make the early inroads into Kent’s batting line-up.

Gloucestershire are currently second in the South Group standings with five wins, a tie, three losses and as many washouts from twelve league matches. They have been performing very well of late and are coming on the back of four wins in their last five completed fixtures. They played their previous match against Somerset last week at Bristol where they registered a comfortable 25-run victory. Prior to that, Gloucestershire secured a seven-wicket win over Hampshire before sharing points with Somerset in their next encounter which got abandoned due to rain.

Kent vs GLO Head to Head

Kent Spitfires and Gloucestershire have both won 8 times each out of the 16 matches that have been played between them in the English domestic twenty20 tournaments.

Gloucestershire have won the last five matches they have played against Kent in the game's 20-over format, including the encounter earlier this month at the County Ground in Bristol.

The two teams have faced each other four times in the tournament at the St Lawrence Ground with both having won on two occasions each.

Kent Spitfires are favorites to win this South Group game of the Vitality T20 Blast 2019 at 1.80 with Bet365. Gloucestershire find themselves as the bookmakers' underdogs for this match and they are being offered at a higher price of 2 on Bet365.

Kent and Gloucestershire have both looked impressive this season and both are strong contenders for a top-four finish at the end of the group stage. The latter clearly have the upper hand when it comes to the recent head-to-head record, having beaten the former in their last five attempts straight. Apart from that, they are coming into this game with the psychological advantage of having secured a convincing victory in the reverse encounter at Bristol earlier this month.

Kent, however, have the home advantage on their side and having won six of their last nine completed T20s here will surely give them plenty of confidence. Their batting has more firepower than that of Gloucestershire's and the signing of South African star batsman Faf du Plessis is going to further boost their performance with the bat. Kent may have been beaten by Gloucestershire last time but we are backing them to exact their revenge come Thursday.

Back Kent to beat Gloucestershire at 1.80 with Bet365.
Bet Now

In our opinion, Gloucestershire's James Bracey seems a better choice for the wicketkeeper slot than Kent's Oliver Robinson. The latter bats much lower down the order and since the pitch is likely to be a batsman-friendly one, there is a good chance that he may not come out to bat. Bracey will probably bat at number three and therefore appears a better pick at 8 credits.

We have picked Faf du Plessis and Sam Billings of Kent along with openers Miles Hammond and Michael Klinger of Gloucestershire as the batsmen in our Dream11 team. Faf du Plessis is available for 10 credits and he can be dangerous in these good batting conditions. Hammond can be picked for 8.5 while Billings and Klinger have both been priced at 9.5.

Our Dream11 team consists of a couple of all-rounders and both belong to Kent Spitfires - Daniel Bell-Drummond and Marcus O'Riordan. Bell-Drummond has had a pretty good tournament with the bat and is definitely worth picking at 9 credits. O'Riordan can be picked for 8 credits.

Hardus Viljoen is one of the tournament's best bowlers and we don't think there should be any second thoughts in picking him. The South African is available for 9 credits and we have also included David Payne for the same price. Andrew Tye can pick up a few wickets with his cutters in the death overs and he too can be picked at 9 credits. Imran Qayyum is available for 8.5.

We have selected Faf du Plessis as the captain of our Dream11 team.

Daniel Bell-Drummond is the vice-captain of our team. 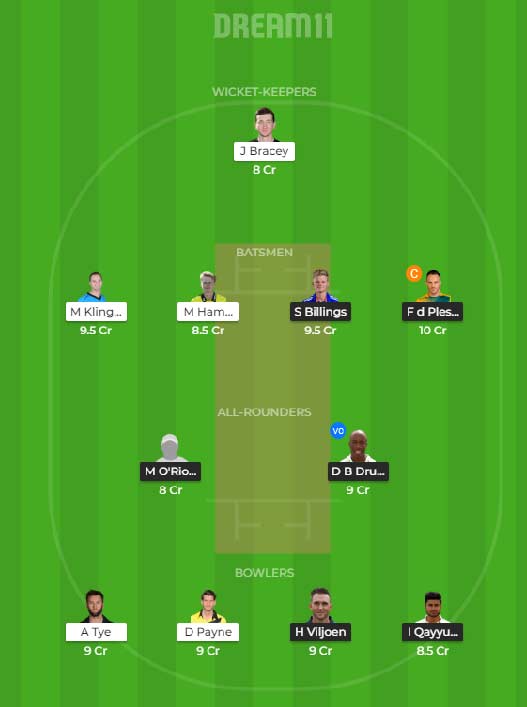 Who will win KENT vs GLO?

Bet on Kent vs Gloucestershire Match