Our Pick Jozi Stars are favorites to win

Defending champions Jozi Stars start the new Mzansi Super League season against the team they beat in last year’s final, Cape Town Blitz. The two teams go head-to-head at The Wanderers in Johannesburg on November 8 and the live action is scheduled to start at 17:30 local time.

The Stars have retained an important chunk of their title-winning team for this season too – Dan Christian, Reeza Hendricks, Duanne Olivier, Rassie van der Dussen, Simon Harmer, Ryan Rickleton and Kagiso Rabada were all either retained or re-signed, though captain Dane Vilas and paceman Beuran Hendricks have moved on.

Cape Town Blitz, meanwhile, had topped the group ahead of the Stars by one point last year after both teams beat each other once in the league phase. This season, they have added round-one draft pick Liam Livingstone, while fellow Englishman Moeen Ali will start the tournament while marquee overseas player Wahab Riaz is on international duty.

JS vs CTB, MSL 2019: Where to watch/Live streaming

The Wanderers tends to produce excellent batting wickets though there is very little wear between innings. You could understand if the hosts opted to bat first, however.

Conditions will be cloudy in the evening in Johannesburg but they are set to avoid the rain for now – though next week’s forecast is not good. With temperatures still in the high 20s, the forecast for Friday evening is just a 15 per cent chance of rain.

As mentioned, the history of The Wanderers is that of excellent batting wickets and iconic high chases. It suggests the pitch tends to stay true, with a consistent bounce throughout.

The biggest change from last season will be the captain for Jozi Stars, with Temba Bavuma arriving. Chris Gayle is their marquee overseas star for the first six matches, meanwhile. The bulk of last season’s team has otherwise been retained and there could be few other changes from the team which won the final.

Rassie van der Dussen: His outstanding form in T20 cricket last season included hitting 469 runs in 11 innings for Jozie Stars to top the MSL run-scoring charts. That included an unbeaten half-century in the final. He comes into this game on the back of hitting 154* in a first-class match at The Wanderers too.

Kagiso Rabada: Named as the Stars’ Proteas Marquee player, the paceman took 13 wickets in eight matches last season, setting the tone for the excellent form he then went on to display at the IPL too.

Duanne Olivier: Topped the bowling charts with 20 wickets in nine innings last season. Having turned his back on the national team by signing a Kolpak deal with Yorkshire, the towering paceman has a point to prove whenever he returns home now.

The Jozi Stars won last year’s Mzansi Super League, beating Cape Town Blitz by eight wickets in the final as Rassie van der Dussen led the lowly chase of 114 to win with an unbeaten half-century. They won six of their group games and only finished second by one point, with Van der Dussen topping the run-scoring charts and Duanne Olivier finishing as top wicket-taker.

Cape Town Blitz will be without marquee overseas signing Wahab Riaz, with England all-rounder Moeen Ali filling in for the first two matches while Riaz is with Pakistan in Australia. Asif Ali, one of their retained players, is also away, but the blitz kept hold of Quinton de Kock, Dale Steyn, Anrich Nortje and Jannemann Malan too, as well as adding Liam Livingstone as their first-round draft pick. Sisanda Magala and George Linde are among their other additions, while Mohammad Nawaz was re-signed in the draft.

Quinton de Kock: Top-scored for Cape Town Blitz last season with 412 runs, including his half-century against the Stars. In his two most recent T20i innings for South Africa, he scored 52 and 79* against India.

Moeen Ali: While he is only around for two matches, the England all-rounder could prove a key acquisition for Cape Town Blitz. He was in outstanding form for Worcestershire Rapids in this season’s T20 Blast as he bounced back from his England axing.

Dale Steyn: Set to make his comeback after the injury which ruled him out of the World Cup, he took four wickets in two IPL appearances prior to the tournament – his most recent T20 experience. He has 231 wickets in 201 T20 matches in total.

Cape Town Blitz won six and lost three of their group game matches, with the one point they gained from a no result ultimately seeing them top the group. In the final against Jozi Stars, however, they failed to get going with the bat – after losing Quinton de Kock early they eventually limped to 113/7. The Stars chased that down with eight wickets and 2.3 overs to spare.

JS vs CTB Head to Head

Jozi Stars restricted Cape Town Blitz to just 113/7 from their 20 overs in last year’s MSL final, before Rassie van der Dussen’s unbeaten half-century led them to the inaugural title. It was their second win against the Blitz, though Cape Town had won the first match. Quinton de Kick (74) and Janneman Malan (66) helped the Blitz to 198/5 in the first match before they bowled the stars out for 136. Reeza Hendricks hit 79 in a total of 196/4 in the re-match, however, and Dan Christian’s 4-22 saw them bowl Cape Town out for 146 in reply.

Jozi Stars won last year’s MSL and have retained most of their key players for 2.0 too. As a result, they are favourites for this opening game.

Jozi Stars will be looking to start as they left off – with victory against Cape Town Blitz. After retaining the core of that title-winning team, it is easy to see why they are favourites to do exactly that.

Quinton de Kock might be the most expensive wicket-keeper but that is fully justified. His importance with the bat for the Blitz can not be overstated and his T20 form is excellent too. Ryan Rickleton is two credits less, but De Kock is the stand-out choice.

As ever, it is hard to ignore Chris Gayle at the top of the order even if he does so frequently blow hit and cold. Fellow Stars Rassie van der Dussen and Reeza Hendricks were central to the team’s success last season, meanwhile, and they are must-picks. For the Blitz, Janneman Malan is just 8.5 credits but score more than 300 runs in last year’s competition.

Moeen Ali is only going to be available for Cape Town Blitz for two games but his T20 Blast form for Worcestershire Rapids shows what he is capable of with the bat and ball – as if any reminder was needed. Two other players to have a big impact on that tournament were Liam Livingstone and Simon Harmer but you may only be able to afford one given the cost of the above picks. Harmer’s bowling is more likely to produce wickets and gives him the edge. There are then a number of good lower-cost options, including George Linde at 8.5 credits.

If you have gone big on the batsmen, you can not afford to do the same with the bowling of Vernon Philander, Dale Steyn and Kagiso Rabada. The latter two are big misses in particular. Anrich Nortje, Sisanda Magala and Duanne Olivier are all in the 8.5-credit bracket, however – that is great value.

Moeen Ali starred with bat and ball for Worcestershire in the T20 Blast and if he continues that form he will be an excellent choice for Dream 11 captain. The Wanderers is a batting wicket so a more adept batting all-rounder is a top pick. For vice-captain, Quinton de Kock’s form in T20 cricket is excellent and he will grab wickets behind the stumps too. 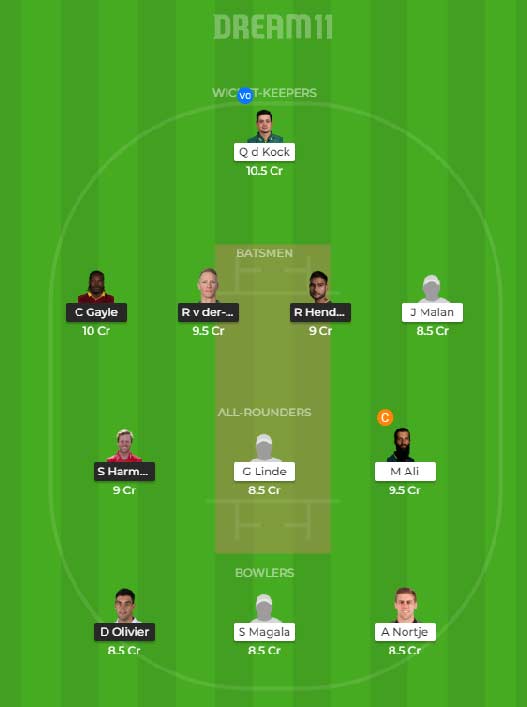 Who will win JS vs CTB?