Our Pick Gloucestershire are favorites to win

Who Will Win Gloucestershire vs Derbyshire 4th QF, Vitality Blast 2019?

The fourth quarter-final of the Vitality T20 Blast 2019 will see Gloucestershire face-off against Derbyshire Falcons. The match will be played on September 7 at the County Ground in Bristol. Live telecast is scheduled to begin at 7 PM local time.

Both the teams are coming into this knockout clash having won their last match. Gloucestershire pipped Sussex Sharks at the County Ground in Hove last Friday. Put into bat first, Sussex scored 163/8 in their 20 overs. Gloucestershire, in reply, got off to a flyer and eventually managed to get over the line off the final ball of the game to win by three wickets. Derbyshire, in their previous match, registered an 11-run victory over Lancashire Lightning last week at the Old Trafford in Manchester. Opting to bat first, Derbyshire posted 162/3 on the board before running through Lancashire's top-order and restricting them to 151/9 in their 20 overs.

GLO vs DERBY, Vitality Blast: Where to watch/Live streaming

A cool and clear weather has been forecast for Saturday evening with a very low chance of precipitation. Temperatures are expected to be around 13-16 degrees Celsius while humidity should be between 66% and 76% during the match.

The Bristol County Ground has hosted five matches so far in this year's Vitality Blast 2019 and 150+ has been scored here on six occasions which is enough to show how good the surface has been for batting. The pitch, however, will have something in it for the spinners.

The pitch is expected to be a good one to bat on and it should remain the same across the forty overs. And since the side batting second has won three of the last four matches at this ground, the team that wins the toss here is more likely to chase.

Gloucestershire made only one change to their side in the last match against Sussex, dropping Chris Liddle for Josh Shaw. Although the latter returned expensive figures, conceding 42 runs off his four overs, the team might want to give him another opportunity. Gloucestershire have no injury concerns heading into this quarter-final and we don't expect them to tweak their line-up for this crucial match. Michael Klinger and Miles Hammond will continue to open the batting while David Payne and Andrew Tye will be the new-ball bowlers.

Michael Klinger: The skipper is looking on top of his game at the moment and is certainly the key man in Gloucestershire's batting unit. The opener has scored the most runs for his side this T20 Blast season - 356 runs at an average of 35.60. Klinger's last four innings' scores read: 40, 74, 102* and 48.

Miles Hammond: Opening alongside his captain Michael Klinger, Miles Hammond has made some vital contributions this year and is having a strike-rate of 142.64. The left-handed batsman has scored 291 runs in the tournament and has hit a couple of half-centuries, the most recent of which came two weeks ago against Somerset at this very ground.

David Payne: The left-arm fast bowler has been the most successful of all the bowlers for Gloucestershire with 16 wickets in 12 matches and that too at a pretty good economy of 7.29. Payne returned impressive figures of 3-36 last time against Sussex and he will be expected to pick wickets upfront in the powerplay.

Gloucestershire did not start off too well this season, winning only one of their first four completed fixtures. But they managed to turn things around thereafter and ended up finishing second on the South Group points table with 18 points. Gloucestershire won seven, lost three and tied one out of their eleven completed matches during the league stage. They have won their last four matches on the bounce. After sharing points with Somerset in a rained-out encounter, Gloucestershire secured three consecutive wins - against Somerset (in the second clash of the season), Kent and Sussex.

Derbyshire have been unchanged since their last two matches, and since they have won both of those, they are unlikely to disturb their winning combination for this upcoming knockout match against Gloucestershire. Luis Reece and Matthew Critchley swapped batting positions last time out, and after Critchley's failure with the bat, we expect Reece to regain his opening spot. Wayne Madsen and Leus du Plooy should continue to bat at their usual number three and four positions respectively. Derbyshire will probably throw the new balls to Logan van Beek and Ravi Rampaul once again.

Billy Godleman: With 419 runs at an average of 46.55, skipper Billy Godleman is one of the tournament's leading run-getter. The left-handed opener has cracked four half-centuries this T20 Blast and is coming off back-to-back fifties - 52* versus Leicestershire and 57 versus Lancashire. Derbyshire will want their captain to lead from the front once again.

Wayne Madsen: He is the other one in this line-up who is featuring on the list of top ten batsmen of the Vitality Blast 2019. Derbyshire's number three has scored 400 runs so far and has four fifties under his belt. Madsen has impressive knocks of 51*, 37* and 69 in his previous three outings.

Ravi Rampaul: The veteran West Indian pacer has unarguably been the best bowler in the tournament with 21 wickets in 12 matches at a very healthy economy of 6.71. Rampaul was outstanding with the ball in the last game against Lancashire, picking three wickets for just 19 runs from his four overs.

Derbyshire Falcons have finished third in the North Group standings at the conclusion of the league stage with seven wins, five defeats and a couple of washouts from their fourteen matches. They have won five of their last six completed matches including the most recently played three. Derbyshire played their last match against Lancashire whom they beat by 11 runs. Prior to that, they inflicted heavy defeats on Northamptonshire and Leicestershire - winning both of those games by a margin of nine wickets.

GLO vs DERBY Head to Head

Ravi Rampaul, Tom Smith, Andrew Tye, Gloucestershire and Derbyshire have never faced each other before in the history of the English domestic twenty20 tournaments. This will be the first time that these two teams will be going head-to-head in the shortest format of the game.

Gloucestershire and Derbyshire both raised their game as the tournament approached its business end and both are coming on the back of consecutive wins. Derbyshire have a few players in their side who are going through terrific form like Billy Godleman, Wayne Madsen and Ravi Rampaul - the joint-leading wicket-taker of the tournament. Gloucestershire, on the other hand, have the home advantage in their favor. They have won their last three matches at this ground and that will give them the upper hand heading into this high-pressure game. Both the teams have given impressive performances of late and there is not much to choose between them. But considering the home advantage, the scales seem to be tipped in favor of Gloucestershire.

We have picked six players from Gloucestershire and five from Derbyshire in our Dream11 team for this T20 Blast quarter-final match.

For the wicketkeeper slot, we have preferred Gloucestershire's James Bracey to Derbyshire's Daryn Smit. Bracey bats much higher up the order and therefore will have more time to settle in and score his runs. So we recommend picking him at 8.5 credits.

Michael Klinger and Billy Godleman are the leading run-scorers for their respective teams in this year's Vitality Blast and we suggest picking them both at 10 credits each. Apart from these two batsmen, we have also included Miles Hammond and Wayne Madsen who are available for 8.5 and 9.5 respectively.

Our Dream11 team consists of two all-rounders and both belong to Derbyshire - Luis Reece and Matthew Critchley. Both are normally made to bowl out their full quota of four overs and both are pretty handy with the bat. Critchley, who is available for 8.5 credits, opened the batting last time out. Reece can be picked for 9.

David Payne and Andrew Tye are doing an excellent job with the ball for Gloucestershire this season and we advice picking them both at 9 credits each. Ravi Rampaul is available for 9.5. He is topping the wickets charts and should be included in the Dream11 team without any kind of hesitation. We have also included Tom Smith for 8.5 credits.

Michael Klinger is the captain of our Dream11 team.

We have picked David Payne as the vice-captain of our team. 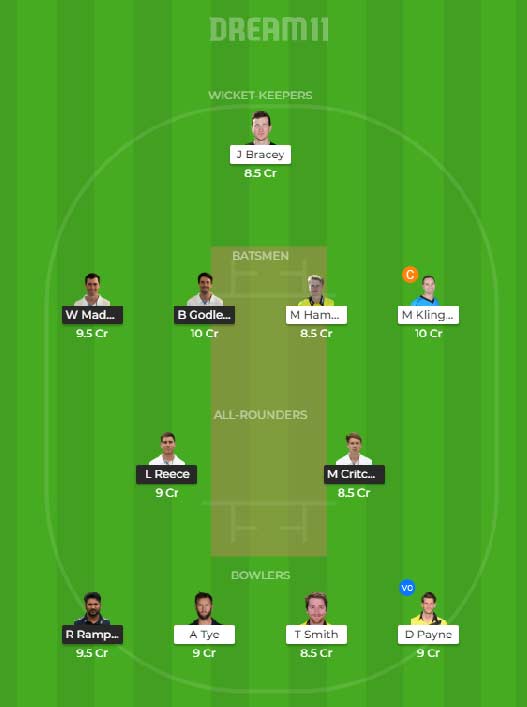 Who will win GLO vs DERBY 4th Quarter Final?

Bet on Gloucestershire vs Derbyshire Match