Our Pick Essex are favorites to win

Who will win Derbyshire vs Essex 2nd SF, Vitality Blast 2019?

Derbyshire Falcons’ first ever T20 Blast Finals Day sees them take on Essex Eagles in the second semi-final at Edgbaston on September 21. Their Vitality Blast 2019 semi-final is due to start at 14:30.

The Falcons finished third in their group, winning seven and losing five and only missing second place on net run rate. They beat Gloucestershire convincingly in the quarter-final, however, to ensure they reached the last four for the first time.

Essex Eagles have been at this stage four times before but never further. They had Ravi Bopara and Ryan ten Doeschate to thank for their shock quarter-final win against North Group champions Lancashire, and the experience of those two could be key again.

DERBY vs ESS, Vitality Blast 2019: Where to watch/Live streaming

Both sides won the toss in their quarter-final and elected to field first. As Essex Eagles look to turn their Finals Day fortunes around – after four defeats so far – they will be keen to win the toss and get first pick as part of that.

By the time of the second semi-final, conditions in Birmingham should have warmed up considerably. The sun will be shining and there is zero chance of rain on the forecast.

Edgbaston has always tended to provide a perfect balance of bat and ball, which is why it is such a great venue for the T20 Finals Day.

Derbyshire Falcons were unchanged from their final group game when they beat Gloucestershire in the quarter-finals. They have favoured a consistent team throughout and so it is likely to be the same 11 at Edgbaston too.

Wayne Madsen: His last four innings in this competition have seen him score 51*, 37*, 69 and 47 – top-scoring in both the final group stage game, which booked their quarter-final place, and again in the quarter-final.

Ravi Rampaul: The West Indian paceman finished the group stage with 3-19 in the win against Lancashire and then took 1-23 last time out to continue his excellent form in this competition.

Derbyshire Falcons’ final group game was a surprise win against leaders Lancashire at Old Trafford. Wayne Madsen hit 69 from 39 balls in a total of 162/3 before Ravi Rampaul claimed 3-19 to restrict the Lightning to 151/9 in reply.

They then carried that form into their semi-final (after a long wait). Madsen hit 47 as Derbyshire chased 136 to beat Gloucestershire by seven wickets with 2.5 overs to spare.

Cameron Delport and Ravi Bopara remain available for Essex after their key roles in the quarter-final win delayed their scheduled stints in the Caribbean Premier League.

Cameron Delport: Vastly experienced in T20 cricket, he finished the group stage by getting back to form with 64 against Kent and then hit 44 against Lancashire too.

Ravi Bopara: Kept it tight with the ball, taking 2-28, and then hit 39* to lead Essex to quarter-final victory. In his last three matches in the competition, he has five wickets and has scored 156 unbeaten runs.

Ryan ten Doeschate: The Dutch all-rounder hit 45* in the win against Lancashire, following up his 55* against Surrey in the group stage. His most recent innings of any kind saw him hit a County Championship century against Surrey too.

Essex Eagles had to beat Kent Spitfires in their final group game of Vitality Blast to beat the Spitfires to a quarter-final place – Cameron Delport hit 64 from 29 balls in a total of 189/6 and Jamie Porter’s 3-28 helped them bowl Kent out for 179.

In the quarter-final, they faced Lancashire. After Ravi Bopara’s 2-28 they were set 160 to win and looked to be in trouble until some late hitting from Ryan ten Doeschate (45*) and Bopara (39*) led Essex to a six-wicket win.

DERBY vs ESS Head to Head

Given their previously poor record in the T20 Blast (and its predecessors) it is should be no surprise to learn this is the first time Derbyshire have faced Essex in this competition.

Derbyshire Falcons are at their first Finals Day and as a result are outsiders with the bookmakers.

Essex Eagles finished the group stage strongly and pulled off a shock result in the semi-finals. Having dumped out Lancashire, it is no surprise to see them tipped to go all the way.

Back Essex Eagles to beat Derbyshire Falcons at 1.66 with Betway and 1.72 with Bet365
Bet Now

Adam Wheater and Daryn Smit is your choice behind the stumps, with Wheater cheaper and higher up the batting order and so the better choice on paper.

It is hard to ignore Wayne Madsen’s form for Derbyshire, and the same rings true of captain Billy Godleman. In fact, there are a number of good batsmen set for this game – Cameron Delport is an obvious Essex pick, while Dan Lawrence and Tom Westley are alternatives, along with Derbyshire’s Leus du Plooy. It may be worth top-loading your Dream 11 team with batsmen.

Ravi Bopara is in fine all-round form and the number of other all-rounders you pick with him depends on how many batsmen you select. Luis Reece has over 300 points this season and is nine credits, while Ryan ten Doeschate and Matthew Critchley are other top options.

Ravi Rampaul is Derbyshire’s stand-out bowler and will cost you 9.5 credits. For Essex, Adam Zampa is nine credits and captain Simon Harmer is perhaps under-rated at 8.5 credits (and likewise Jamie Porter at eight credits). Flynn Hudson-Prentice is another representing excellent value at 8.5 credits, having amassed 201 Dream 11 points this season.

Ravi Bopara is the top all-rounder on show, given his form with bat and ball in the lead-up to this game. He would make a good captain pick. Wayne Madsen’s consistent batting form makes him a good vice-captain contender, meanwhile. 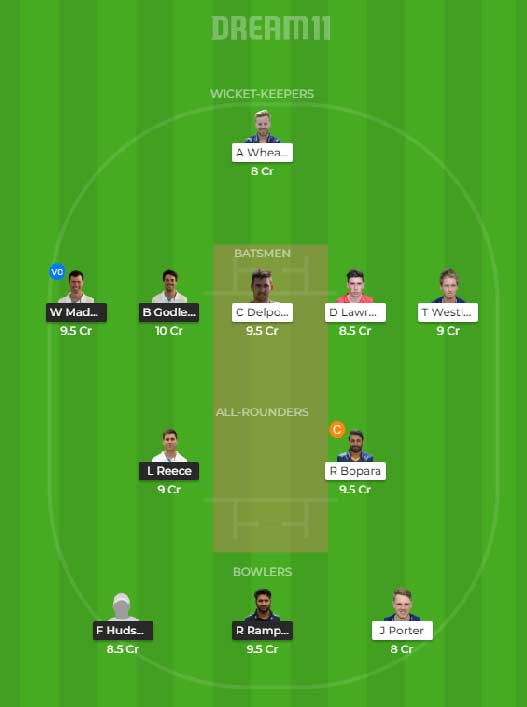 Who will win DERBY vs ESS 2nd Semi Final?

Bet on Derbyshire vs Essex Match