Our Pick VB Kanchi Veerans are favorites to win

VB Kanchi Veerans will be desperate for a win when they face-off against Ruby Trichy Warriors on August 9. The 28th and final league-stage match of the Tamil Nadu Premier League 2019 will be played at the Indian Cement Company Ground in Tirunelveli. Live telecast is scheduled to begin at 7:15 PM local time.

Ruby Trichy Warriors are currently second from the bottom on the points table with just two points and cannot possibly make it through to the playoffs even if they win this match. VB Kanchi Veerans, who are fifth in the standings with six points, are still in the hunt. However, they need to win this match by a good margin in order to sneak into the top four on account of a healthier net run-rate.

VB Kanchi Veerans have a good-looking batting line-up with Baba Aparajith, Sanjay Yadav and Rajagopal Sathish being the key figures. Aparajith has scored the most runs for his side - 179 runs - and the skipper will be expected to lead from the front on Friday night. K Vishal Vaidhya, who cracked a fifty in the last match against Dindigul Dragons, is another batsman to watch out for. K Gowtham Thamarai Kannan has been the most impressive bowler for the Veerans with eight wickets in five matches and the onus will be on this fast bowler to take wickets against the Ruby Trichy Warriors. Rajagopal Sathish and R Divakar are two other bowlers in this line-up whom the opposition will be wary of.

Murali Vijay, K Mukunth and Adithya Ganesh are the big guns for Ruby Trichy Warriors when it comes to batting. Murali Vijay has shown excellent form this season having scored 359 runs at a stunning average of 119.66. The opener is coming off a brilliant 57-ball 101 against TUTI Patriots and the team will want him to play another match-winning knock before bowing out of the tournament. The Warriors will expect strong contributions from their key bowlers - Saravan Kumar, Lakshminarayanan Vignesh and Ravisrinivasan Sai Kishore. With nine wickets in six matches, Saravan Kumar has been the pick of the lot. He will be opening the bowling attack with Lakshminarayanan Vignesh, who has seven wickets in the tournament, and the pace duo will be backed by the team to provide the early breakthroughs.

VKV vs RTW Head to Head

VB Kanchi Veerans and Ruby Trichy Warriors have faced each other three times in the Tamil Nadu Premier League with the former leading the scoreline 2-1.

While the Veerans won the first two encounters - in 2016 and 2017 - the Warriors emerged victorious by six wickets in the most recent one which was played last year at this very ground.

While VB Kanchi Veerans lost their previous match against Dindigul Dragons, Ruby Trichy Warriors are coming on the back of a convincing 17-run win against TUTI Patriots. The former may have lost all their momentum with back-to-back losses but they would still be going into this game as the more confident of the two sides as they have more in-form players in their line-up.

The Warriors have relied too much on Murali Vijay to score runs for them this year and they are bound to struggle if they lose him early in their innings. The Veerans, on the other hand, are a better balanced unit and are not dependent on just one particular individual, be it with the bat or with the ball. They need a win here to keep their playoffs hopes alive and we expect them to do just that on Friday. 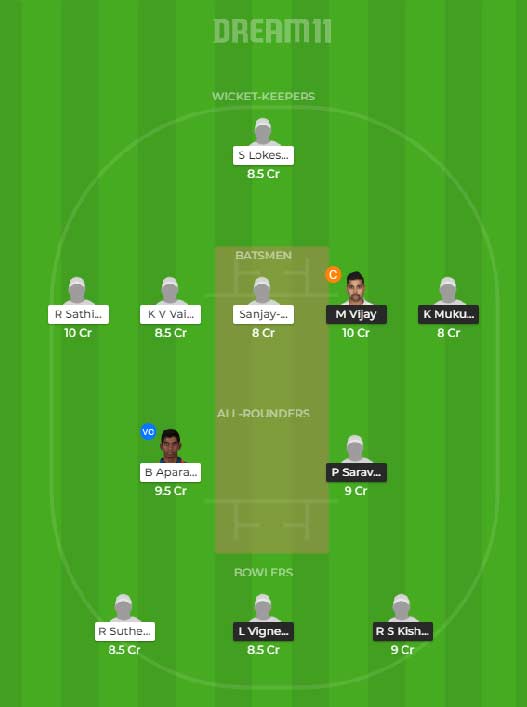 Who will win VKV vs RTW?