Who Will Win England vs New Zealand Final, ICC CWC 2019?

England swatted Australia aside in the semi-final at Birmingham and have set up the title clash with New Zealand who defeated India in the semi-final at Manchester. The final showdown of the ICC Cricket World Cup 2019 will be played on July 14 at the Lord's in London. Live telecast of the match is scheduled to begin at 10:30 AM local time.

ENG vs NZ, ICC CWC 2019: Where to watch/Live streaming

A pleasant weather with no rain threat has been forecast for the World Cup final on Sunday. Temperature is expected to be between 18 and 21 degrees Celsius and humidity around 63% during the day.

The Lord's has hosted four matches in this World Cup and the team batting first has posted 280+ on three occasions. The pitch has been very good for batting but has tended to slow down as the game progresses, and a similar surface can be expected on Sunday.

With pitches in England slowing up during the second-half, teams have preferred batting first and putting the scoreboard pressure on the oppositions. We expect the toss-winning team in this match to continue the trend. Moreover, the last five ODIs (including all four of this World Cup) played at this ground have been won by the side batting first.

England do not have any injury scares ahead of their title bout against New Zealand. They have been unchanged since their last three matches, and since they have won all three of those, there seems very little reason for them to tinker with their winning combination. Given the conditions at the Lord's, the home team is unlikely to deviate from its current strategy of going in with a five-man pace attack and just the one specialist spinner in Adil Rashid.

Jason Roy: The opener has been in sublime form and is one of the key men in England's batting line-up. Roy has hit a century and four half-centuries in this World Cup and is averaging 71. His last four innings' scores read 153, 66, 60 and 85.

Joe Root: He is featuring on the list of top five batsmen in the tournament with 549 runs under his belt which includes a couple of hundreds and three fifties. Root has played two good knocks in his last three outings and finished unbeaten on 49 in the semi-final against Australia.

Jofra Archer: The fast bowler is currently third on the wickets charts with 19 wickets at an impressive economy of 4.61. He claimed 2-32 from his ten overs in the last match against Australia and he is likely to pick wickets with the new ball against New Zealand as well.

England have now won six of their last eight one-day internationals and the eight-wicket win over Australia the other day at Birmingham was their third consecutive win in the 50-over format. Incidentally, their last ODI defeat came against Australia just a couple of weeks ago - by 64 runs at this very venue during the league phase of the ongoing World Cup. England were clinical with both bat and ball in the semi-final, knocking the Aussies over for 223 before chasing their target inside 33 overs.

England's World Cup 2019 campaign got off to a very good start with four wins from the first five fixtures; the only blip coming against Pakistan at Nottingham. They next suffered a shock defeat to Sri Lanka at Leeds and before they could recover from that loss, Australia thrashed them by 64 runs at London. Back-to-back defeats put the hosts in a precarious position, making it imperative for them to win their final two round-robin games against India and New Zealand.

England did exactly what needed to be done - they beat India and New Zealand by comfortable margins of 31 runs and 119 runs respectively to finish third on the points table and seal their spot in the semis. Next up were arch-rivals Australia in the semi-final at Birmingham where Morgan's men secured a resounding eight-wicket win to advance to the final.

New Zealand made just the one change to their line-up last time from their heavy defeat to England in their final round-robin game at Chester-le-Street. Tim Southee was expensive in that game, returning figures of 9-0-70-1, and was replaced by Lockie Ferguson in the semi-final clash against India. Ferguson displayed much better skills and is likely to be retained for the Sunday's final against England. Martin Guptill and Henry Nicholls will open the batting for New Zealand while skipper Kane Williamson and Ross Taylor will bat at their usual number three and four positions respectively.

Kane Williamson: The skipper has led from the front this World Cup. He is amongst the tournament's leading run-scorers with 548 runs and a terrific average of 91.33. The key batsman has two centuries and as many half-centuries to his name and looks set to take on the English attack.

Ross Taylor: New Zealand's number four is the most experienced batsman in the team and has made vital contributions with the bat in almost every game in the tournament. Taylor would have grown in confidence after top-scoring for his side with 74 runs in the semi-final against India on a very challenging surface.

Trent Boult: The paceman seems to have returned to his best after playing second fiddle to Lockie Ferguson in the first few matches of this World Cup. He has picked eight wickets in the last three games which has taken his tally to 17 in the tournament. Boult has a couple of four-wicket hauls to his name - against West Indies and Australia.

New Zealand have nine wins and three losses in their last twelve one-day internationals. After suffering defeats in three matches on the bounce - against Pakistan, Australia and New Zealand - the Black Caps ended their losing streak in style with a convincing 18-run victory over India in the semi-final at Manchester. After Ross Taylor and Kane Williamson smashed fifties and took the team to a respectable total of 239, Trent Boult and Matt Henry spat venom with the ball to knock the two-time champions out of the tournament.

New Zealand could not have asked for a better start to their World Cup campaign. They demolished Sri Lanka in their opening game at Cardiff and built on the momentum with consecutive wins over Bangladesh and Afghanistan. Though their game against Afghanistan proved to be a stroll in the park for them, they were stretched by Bangladesh and made to work hard for the win. The Kiwis then had to share points with India in a rained-out game at Nottingham before getting the better of South Africa and the West Indies.

New Zealand’s form, however, took a dip as the tournament approached its business end, facing heavy defeats in their final three league games - against Pakistan, Australia and England. Kane Williamson and co. eventually made it to the knockout round on account of a superior net run-rate to Pakistan, finishing fourth on the leaderboard with 11 points. New Zealand then faced India in the semi-final at Manchester and defied the odds to prevail by 18 runs in the end and confirmed their ticket to London for Sunday's final.

ENG vs NZ Head to Head

England have won 41 while New Zealand have won 43 out of the 90 one-day internationals that have been played between them. Two of those have resulted in ties while four have ended in no results.

England have won four of their last five ODI encounters against New Zealand including the comprehensive 119-run victory at the Chester-le-Street last week.

New Zealand have never lost to England at the Lord's in the game's fifty-over format. The two countries have faced-off twice at this ground with the Kiwis emerging victorious on both the occasions - by 51 runs in June 2008 and by 5 wickets in May 2013.

England, after securing comfortable wins in their last three matches - against India, New Zealand and Australia, start off as overwhelming favorites amongst the bookmakers to win this final match of the ICC Cricket World Cup 2019. New Zealand are the underdogs for this game.

New Zealand upped their game in the semi-final against India and that should give them plenty of confidence going into this final. They have one of the best bowling attacks in the world and will really fancy their chances if they get rid of England's top order for not many runs on the board. Having said that, the hosts have a formidable batting line-up with the likes of Jason Roy, Jonny Bairstow and Joe Root all hitting top form. The Kiwis will be playing their second consecutive World Cup final but they will have to show the same level of intensity against England as they showed against India. The hosts, however, look superior in both batting and bowling departments, and unless they have a really bad day, we don't think New Zealand can stop them from winning their maiden World Cup title on  $ Sunday.

England to beat New Zealand at 1.33 with Bet365 and 1.30 with Betway and Betrally.
Place Your Bet Now

Our Dream11 team for England vs New Zealand World Cup 2019 final match consists of seven players from England and four from New Zealand since the home team stands a better chance of winning this match.

Jason Roy has been in electrifying form and so has New Zealand skipper Kane Williamsom and we have no hesitations in picking them in our Dream11 team. We have also selected Jonny Bairstow and Ross Taylor.

Jofra Archer has shone with the ball for England since the beginning of this World Cup while Chris Woakes is always a big threat with the new ball. Apart from him, we have also included Trent Boult who has returned to form and Adil Rashid who has a knack of picking up wickets at key moments.

Ben Stokes and Mitchell Santner have made significant contributions with both bat and ball for their respective sides right through the tournament which is why they are both featuring in our team.

We have picked England's Jos Buttler in our Dream11 team under the wicketkeeper category instead of Tom Latham. Buttler has shown much better form than his New Zealand counterpart and he can be sent up the order as per the situation of the game which means more run-scoring opportunity.

We have picked Jason Roy as the captain.

We have picked Jofra Archer as the vice-captain. 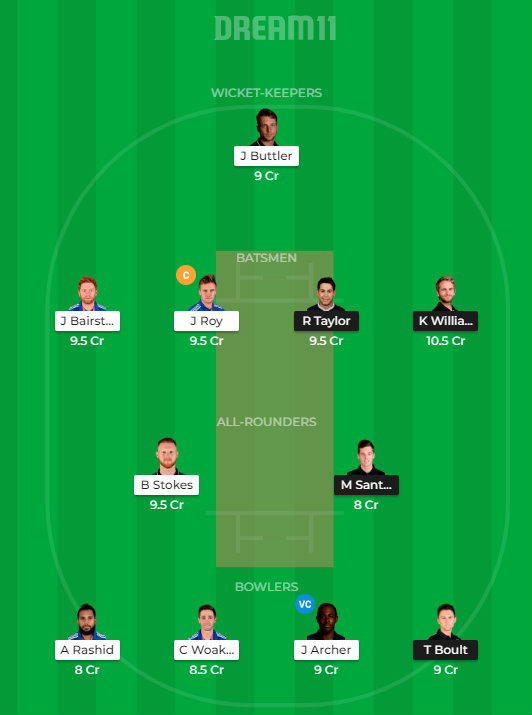 Who will win ENG vs NZ Final?