Who Will Win Worcestershire vs Nottinghamshire, T20 Blast 2019?

Worcestershire Rapids will look to confirm their place alongside Notts Outlaws in the quarter-finals of the 2019 Vitality Blast when they meet at New Road in their North Group fixture on August 28. The live action starts at 16:00 local time.

The Outlaws have already confirmed their quarter-final place with three wins from their last three completed matches. Another win will ensure they are at Trent Bridge for that quarter-final fixture.

Worcestershire, meanwhile, still need one more point to seal their last-eight place. The Rapids lost their last home game – a high-scoring 25-run defeat to table-topping Lancashire Lightning – having won two in a row before that.

WORCS vs NOTTS, Vitality Blast 2019: Where to watch/Live streaming

Worcestershire won the toss in their last home game and elected to field first. If the Rapids are successful again – having also won the toss when these teams last met – they may stick with that option despite losing to the league leaders.

There is a chance of rain throughout the day in Worcester, with the fixture unfortunately scheduled on one of the poorer days of the past week weather-wise. They may get a full game if they are lucky, however.

While New Road has had more than its fair share of issues with rain and water-logging, the pitch was perfect for batting last time out – an afternoon when 411 runs were scored in their last T20 match.

Moeen Ali’s England omission has been the Rapids’ gain, with the all-rounder back to captain the Rapids in this year’s Blast. He starred alongside Riki Wessels in the win against Birmingham Bears but another key figure – Martin Guptill – is now away with New Zealand. Tom Fell replaced him last time out. It is the second overseas player they have lost, with Callum Ferguson returning home for personal reasons.

Moeen Ali: Scored 32 and took 4-18 when these teams last met and ended his cricketing exile to score 85* in the Rapids’ last win. He has also taken two wickets in his last two games too.

Riki Wessels: Scored 65* when Worcestershire beat Birmingham Bears, to add to scores of 91 against Yorkshire and 74 already in this season’s competition. He now has 304 runs in this year’s competition at a strike rate of 146.15.

Wayne Parnell: The South African has taken 11 wickets in ten matches so far, and also scored 144 runs – including bludgeoning 81 not out against Derbyshire for his highest score.

Worcestershire closed in on a play-off place either side of the break for the round of County Championship fixtures. They defended 117/7 to win a thrilling low-scoring game against Durham by three runs and then thrashed Birmingham Bears by nine wickets, with unbeaten half-centuries from Riki Wessels (65*) and Moeen Ali (85*).

Last time out, however, they suffered a high-scoring defeat to Lancashire Lightning. Set 219 to win at New Road, they were well behind the asking rate until Ross Whiteley smashed an unbeaten 89 from 40 balls, but they still finished well short on 193/7.

Soon-to-depart Luke Wood was back in the team last time out, replacing Jake Ball in the only change from the win against Leicestershire Foxes.

Alex Hales: Scored the first of his three half-centuries in this year’s competition when these teams last met. His most recent was in last week’s win against Leicestershire, when the former England man smashed 60 at the top of the order.

Harry Gurney: After winning the Big Bash with Melbourne Renegades and playing for Kolkata Knight Riders in the IPL, he has continued his excellent bowling form with 17 wickets in nine games so far in this year’s competition.

Joe Clarke: Scored a vital half-century in the win against Yorkshire – the second time he has scored exactly 50 this season on his way to 247 runs in total – second only to Hales for the Outlaws in this campaign.

Notts Outlaws have won their last three Vitality Blast matches, most recently seeing off Leicestershire Foxes and Yorkshire Vikings in the past week.

Alex Hales hammered 60 from 39 balls in the seven-wicket win against the Foxes, after Luke Fletcher’s 3-17 had helped restrict the hosts to 161/8.

Joe Clarke then top-scored with exactly 50 in the last match, before some late hitting from Dan Christian lifted the Outlaws to 148/7. In reply, they restricted the Vikings to 145/7. Luke Fletcher took two wickets in the penultimate over and Harry Gurney added another in the final over as they restricted Yorkshire to 14 runs between them, having needed 18 to win.

WORCS vs Notts Head to Head

Worcestershire Rapids’ win at Trent Bridge earlier in this year’s competition was their fifth in 14 previous matches against the Outlaws. Moeen Ali claimed four wickets as Worcestershire restricted Notts to 133/9 in reply to 161/6. In the last two seasons they have each won one game apiece, however – so perhaps this is Notts turn once again…

Notts Outlaws are in good form and that momentum explains why they are favourites with the bookmakers.

Notts Outlaws have already secured their play-off place but will want another win to ensure they book a home quarter-final. With the Rapids missing Martin Guptill and Callum Ferguson, the Outlaws can take advantage and earn a fourth consecutive win.

Back Notts Outlaws to beat Worcestershire Rapids at 1.80 with Bet365 and Betway.
Bet Now

Joe Clarke and Tom Moores are both listed as wicket-keepers for Notts Outlaws and both have scored runs this season. Clarke hit 50 last time out and is the Outlaws’ second-top scorer. The other option is Worcestershire’s Ben Cox.

With Martin Guptill away, Hamish Rutherford could be a key batsman for Worcestershire having been added to the Rapids’ line-up in place of Callum Ferguson. Riki Wessels is another of their key batting figures and is in good form too, while Ross Whiteley starred last time out. For the Outlaws, Alex Hales may be ten credits but he is their top run scorer and the former England man’s big-hitting exploits are well known. Ben Duckett is another top-quality option.

Moeen Ali has returned to the Worcestershire Rapids team and is key with bat and ball. He top-scored in their last win, and took four wickets when they last met the Outlaws. They also have Wayne Parnell as a top-quality all-round option – he scores in boundaries and regularly picks up wickets. They may be better options than the similar priced duo of Dan Christian and Samit Patel for Notts.

Harry Gurney has been in excellent form for Nottinghamshire this season, while Luke Fletcher has been key to their recent success too. Patrick Brown is 8.5 credits for Worcestershire, while Ed Barnard – who also impressed with the bat when these teams last met – is even better value at eight credits.

Moeen Ali’s return for Worcestershire is a huge boost for the Rapids and the spin-bowling all-rounder is likely to have a big impact. He can take wickets and score big runs and his form on his return has been good. He is an obvious pick for captain, ahead of Wayne Parnell who can be a little inconsistent. If it is consistency you want, meanwhile, Harry Gurney will not be scoring many runs but he picks up wickets with great regularity. He is key with the ball and could make a good vice-captain pick. 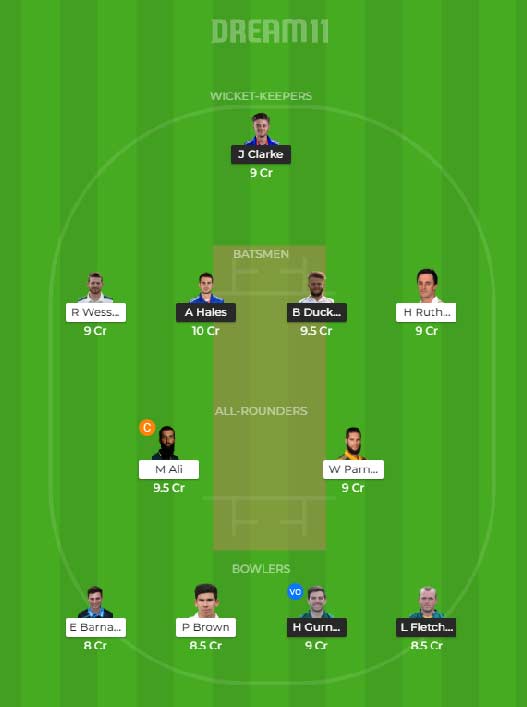 Who will win WORCS vs NOTTS?

Bet on Worcestershire vs Nottinghamshire Match