Our Pick India are favorites to win

Who will win West Indies vs India, 1st Test?

West Indies and India start their ICC World Test Championship fixtures against each other in Antigua, with the tourists looking to wrap up a very successful tour so far. They won both the ODI and T20i series without losing a game.

India also beat West Indies when they last met, in October last year, but that win was at home. Nevertheless, with Virat Kohli leading the way they are among the favourites to top the World Test Championship. This match takes place between August 22-26 and the live action at the Sir Vivian Richards Stadium is scheduled to start at 09:30 every day.

West Indies will take some confidence from their last test series, however – also at home – when they beat England 2-1.

WI vs IND, 1st Test: Where to watch/Live streaming

West Indies won the toss in their last match at the Sir Vivian Richards Stadium, when they beat England, and they will want to have similar success this time out. They could bowl first again if they think there will be life in this pitch.

Hot, a little humid but mostly sunny, the conditions in Antigua should be perfect for this test match, with temperatures up to 29 degrees Celsius every day.

Never short of controversy, the wicket at North Sound was rated below average last time West Indies played a toss here – uneven bounce being the factor cited. It has faced problems before and could be difficult to bat on again.

Giant off-spinner Rahkeem Cornwall could be in line for a test debut after taking 197 wickets in the domestic four-day competition over the past five seasons. He replaces Jomel Warrican in the squad from the those selected to beat England earlier this year. The only other player missing from that series is injured Alzarri Joseph. Despite hinting he would like to play, Chris Gayle has been overlooked.

Jason Holder: Led from the front in the series win against England, including his double-century in the first match and his wickets in the second at North Sound.

Darren Bravo: While his form was not great in the ODI Series, this is his preferred batting format and he will look to add to eight test centuries and 17 50s in the format.

West Indies ended their test-match losing streak with a shock 2-1 win against England earlier this year. Jason Holder hit a double-century as they won the first test by 381 runs, having bowled the tourists out for 77 in the first innings. In the second test, Kemar Roach took eight wickets and West Indies won by ten wickets. They did lose their most recent match, however – a 232-run defeat in the dead rubber third game.

Wriddhiman Saha could return as the wicket-keeper for this leg of the tour as he competes with Rishabh Pant behind the stumps. Jasprit Bumrah returns to the squad after being rested for the limited-overs matches, meanwhile. Ravichandran Ashwin, Cheteshwar Pujara and vice-captain Ajinkya Rahane are among the other test specialists to have linked up with their countrymen for IND vs WI 2019 matches.

Virat Kohli: After back-to-back centuries in the ODI series, the world number one test batsman will now look to carry that form into the tests. He has 25 test centuries and 20 half-centuries in just 77 matches so far, on his way to a 53.76 average.

Cheteshwar Pujara: Hit a century in the warm-up game to prove he is bang in form still, and the batsman will now look to build on his 51.18 test average. There is a reason only Kohli is ranked above him in the Indian squad.

Ravindra Jadeja: India’s top-ranked test bowler, having picked up 192 wickets in his first 41 test matches. He also hit 81 with the bat in their most recent test against Australia.

India beat West Indies 2-0 at home in October to bounce back from defeat to England and continued their winning return with a 2-1 victory against Australia across the turn of the year. Their most recent test match was a draw, however – Cheteshwar Pujara (193) and Rishabh Pant (159*) led them to 622/7 declared against the hosts. Kuldeep Yadav took 5-99 to restrict Australia to 300 but the follow-on only lasted four overs after the final day was washed out.

WI vs IND Head to Head

India’s two test wins at home against West Indies in October take them to 20 victories in this fixture in test matches. West Indies’ historical dominance mean they still lead the way with 30 wins, however, while there have been an incredible 46 draws. In that series, Virat Kohli scored 139 and Prithvi Shaw hit a debut century in a total of 649/9 declared as India won the first match by an innings and 272 runs. They wrapped up the series by winning the second test by ten wickets in Hyderabad. Umesh Yadav took a ten-wicket haul with 6-88 in the first innings and 4-45 in the second.

India are big favourites for this first test in Antigua.

India are huge favourites for this series and it is not hard to see why. They should live up to that billing.

Rishabh Pant is looking to keep the gloves ahead of Wriddhiman Saha for this first test. Shane Dowrich will keep for West Indies. Of the three, Pant has been in the better form and featured more prominently than Saha in the warm-up game.

Unsurprisingly, Virat Kohli and Cheteshwar Pujara are hugely expensive. Both are in superb form and difficult to overlook, however. Darren Bravo and Mayank Agarwal help to balance the books a little.

Jason Holder and Roston Chase were in excellent form when West Indies beat England in their last test series. Of the Indians, Ravindra Jadeja contributed with bat and ball in Australia and looks to have the edge for a place in this team.

Another West Indian in excellent form when they were last in test action was Kemar Roach. He is nine credits but that leaves enough in the bank for Mohammed Shami and Kuldeep Yadav to complete your line-up.

Virat Kohli is in superb form, hitting back-to-back centuries in the ODI series against West Indies. Cheteshwar Pujara scored a century in the warm-up game, meanwhile. Kohli will score big as a captain pick. There are some good all-round options too, however. Jason Holder could score with bat and ball having done just that against England. 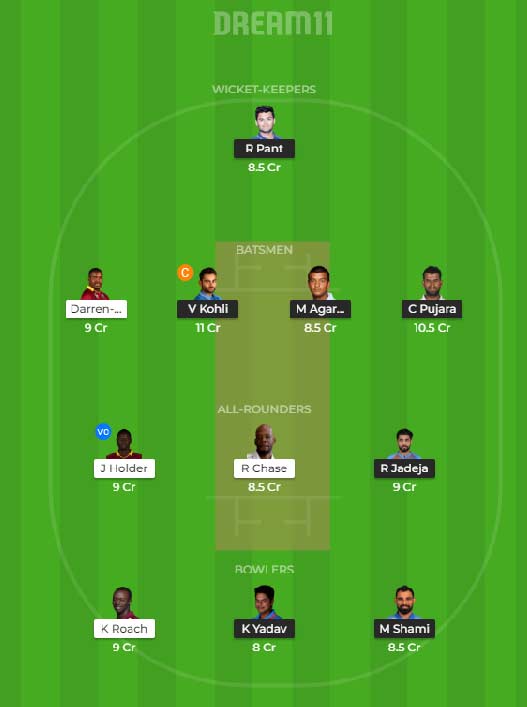 Who will win WI vs IND 1st Test?