Our Pick Chepauk Super Gillies are favorites to win

Who Will Win TUTI Patriots vs Chepauk Super Gillies, TNPL 2019?

Chepauk Super Gillies will look to seal their place in the playoffs when they take on the Tuti Patriots in this 27th fixture of the Tamil Nadu Premier League 2019. The penultimate league-stage match will be played on August 9 at the Indian Cement Company Ground in Tirunelveli. Live telecast is scheduled to begin at 3:15 PM local time.

Chepauk Super Gillies find themselves in a pretty comfortable position at the second spot on the TNPL 2019 points table with eight points. However, they would not want to leave their fate in the hands of other teams and will look to confirm their place in the playoffs with a win on Friday. Tuti Patriots, on the other hand, are placed sixth on the leaderboard with four points. A win here in their final league game would take them to a maximum of six points, although it won't be enough for them to qualify for the playoffs.

TP vs CSG, TNPL 2019: Where to watch/Live streaming

Except Akshay Srinivasan, who scored 63 off 47 balls, no other batsman in the team could make a major contribution with the bat in the last game against Ruby Trichy Warriors. The opener struck his second fifty of the season last time and is the Patriots' leading run-getter with 196 runs. His partner V Subramania Siva has also been amongst the runs and he will be expected to convert a good start into something substantial this time around. The team will also want batsmen Nidhish Rajagopal and Vasanth Saravanan to step up.

V Athisayaraj Davidson was the only shining spot in the team's bowling attack last time. The pacer returned 4-24 from four overs to become the most successful bowler for the Patriots in the tournament with seven wickets in five matches. Tamil Kumaran too has the same number of wickets to his name and it will be up to him to keep the pressure on Chepauk Super Gillies from the other end.

Chepauk Super Gillies would have been disappointed with their batting performance in the last game against Madurai Panthers where four of their top six batsmen were dismissed for single-digit scores. Gopinath was the only top-order batsman to make a notable contribution of 45 while Uthirasamy Sasidev batted well in the middle order to top-score with 51. The former is one of the tournament's leading run-scorers with 224 runs and has hit a couple of fifties as well. For the Super Gillies to do well with the bat, they will need the likes of Ganga Sridhar Raju and Kaushik Gandhi apart from Gopinath to click collectively.

In terms of bowling, the team will bank on their go-to men Harish Kumar, G Periyaswamy and R Alexander to deliver the goods. Harish and Periyaswamy are the top two bowlers of the TNPL 2019 with 11 wickets apiece. The former even has a couple of four-fers to his name and is more likely to finish with the best bowling figures in this match. Left-arm spinner Alexander has picked 10 wickets and has the best economy rate among the trio – 4.57.

TP vs CSG Head to Head

Tuti Patriots hold a 5-1 advantage over Chepauk Super Gillies in terms of head-to-head count in the Tamil Nadu Premier League.

The most recent encounter between the two teams came last year at the MA Chidambaram Stadium in Chepauk. The Super Gillies, after electing to bat first, posted 167/6 on the board but the Patriots finished off the chase in the 18th over to seal a comfortable seven-wicket win.

Chepauk Super Gillies are favorites to win this match at 1.66 with Betway, Bet365 and 10CRIC. TUTI Patriots are the bookmakers' underdogs for this game and they have been priced at 2.10 on Betway and 2.20 on Bet365 and 10CRIC.

Tuti Patriots have a huge psychological advantage when it comes to their record against Chepauk Super Gillies. The two teams have faced each other six times in the history of the Tamil Nadu Premier League with the Patriots emerging victorious on five occasions. Last year, they beat the Super Gillies quite convincingly and that should give them plenty of confidence heading into this game. However, their performance this season has not been up to the mark while the Super Gillies have been very consistent and are coming on the back of four wins in their last five matches. Chepauk Super Gillies have a superior bowling attack which is another reason why we are backing them to win this match and confirm their ticket to the playoffs.

Back Chepauk Super Gillies to beat TUTI Patriots at 1.66 with Betway, Bet365 and 10CRIC.
Bet Now

Our Dream11 team has more players from Chepauk Super Gillies (7) than Tuti Patriots (4) as we feel the former has a better chance of winning this match.

Gopinath of Chepauk Super Gillies is one of the top five batsmen in the tournament and he can be picked at 9 credits. His opening partner Ganga Sridhar Raju is also available at the same price. Akshay Srinivasan and V Subramania Siva have been the most consistent batsmen for the Tuti Patriots and we have also included them in our Dream11 team at 9.5 and 8.5 credits respectively.

Fast bowler G Periyaswamy and spinner R Alexander of the Chepauk Super Gillies have had a great tournament so far which is why we have picked them both in our team at 8.5 credits each. Tamil Kumaran and V Athisayaraj Davidson have been the standout performers with the ball for the Tuti Patriots and they can be picked at 8.5 and 9 credits respectively.

We have picked two all-rounders in our team and both belong to Chepauk Super Gillies - Harish Kumar and Murugan Ashwin. The former is leading the TNPL 2019 wickets charts with 11 wickets while the latter too has had a pretty good tournament with seven wickets at a very good economy of 5.70. While Harish is available at 8.5, Ashwin can be picked at 10 credits.

We have picked A Arif of Chepauk Super Gillies as the wicketkeeper in our Dream11 team. The number four batsman failed to get off the mark last time and will be eager to make amends on Friday. Arif is available at 8.5 credits.

Chepauk Super Gillies opening batsman Gopinath is the captain of our team.

We have picked Harish Kumar as the vice-captain of our Dream11 team. 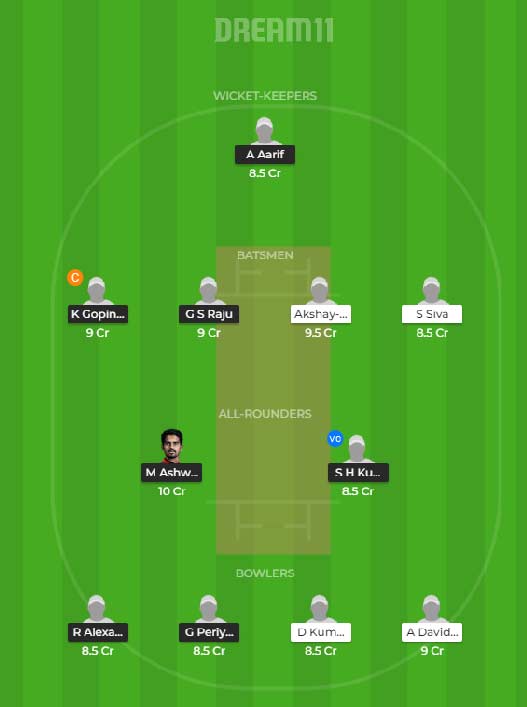 Who will win TP vs CSG?