Our Pick Sydney Sixers Women are favorites to win

Who Will Win Sydney Thunder vs Sydney Sixers, WBBL 2019?

After back-to-back defeats, Sydney Thunder women will look to get back on the winning track when they face-off against their cross-town rivals Sydney Sixers women in this 33rd fixture of the Women's Big Bash League 2019. The derby clash will be played on November 15 at the Drummoyne Oval in Sydney. Live telecast of the match is scheduled to begin at 7:10 PM local time.

The weather forecast for this match looks very good with clear skies and no chance of rain. It should be pretty cool in the evening with temperature expected to be between 22 and 25 degrees Celsius.

The Drummoyne Oval hosted three matches in the previous season of the Women's Big Bash League and each of the six innings produced a score in the range of 130-140. This indicates that it is not a high scoring ground and there will be something in the pitch for the bowlers.

Since the pitch will remain the same across the forty overs, the team that wins the toss in this match is more likely to bowl first. That way, the team will know what total they will be chasing and how they should pace their innings.

Sydney Thunder made a couple of changes to their side in the last match against Perth Scorchers. They drafted Rachael Haynes and Lisa Griffith into the playing eleven at the expense of Rachel Trenaman and Saskia Horley. Rachael Haynes, who has taken over the captaincy from Alex Blackwell, will be batting at number three. Naomi Stalenberg and Rachel Priest will continue to open the batting while pace bowlers Samantha Bates and Shabnim Ismail will spearhead the Thunder's bowling attack.

Alex Blackwell: She has scored the most runs for Sydney Thunder so far in this year's WBBL - 225 runs in seven matches at an average of 45. The top-order batter smashed a half-century (56 off 38 balls) in the reverse fixture against Sydney Sixers.

Nida Dar: The Pakistani allrounder is a key figure in the Sydney Thunder's line-up. She has been pretty impressive with the ball picking up eight wickets in seven matches, two of which came against the Sixers. Nida Dar had a good outing with the bat last time out scoring 43 runs.

Rene Farrell: She has been the team's standout performer with the ball having taken eight wickets at a very healthy economy rate of 6.53. The fast bowler has picked at least one wicket in each of the previous five matches including a couple in the last match against Perth Scorchers.

Sydney Thunder are currently placed fifth on the WBBL 2019 points table with four wins, three losses and a no result from eight league matches. After the big loss in the tournament opener against Sydney Sixers, they won their next four completed fixtures on the trot. However, the Thunder have lost all their momentum with defeats in their last two matches - both against Perth Scorchers. They were let down by their batters on both the occasions.

Sydney Sixers dropped Jodie Hicks and brought in off-spinner Lauren Smith in the last match against Hobart Hurricanes. Smith dismissed Hobart's skipper Corinne Hall in the only over she bowled in the game and that should be enough to retain her place in the side. The Sixers will open their batting with captain Ellyse Perry and wicketkeeper Alyssa Healy while Erin Burns and Dane van Niekerk will continue to bat in the middle order. Marizanne Kapp will likely start the proceedings with the ball.

Ellyse Perry: She is a gun player for Sydney Sixers. The skipper is currently one of the leading run-scorers in the tournament with 351 runs and is averaging 117. Perry clubbed 81 off 48 balls in the reverse encounter against the Thunder and is coming off an unbeaten 70 against Hobart Hurricanes.

Alyssa Healy: With 243 runs at an average of 40.50 and strike-rate of 157.79, the wicketkeeper is among the tournament's top ten batters this WBBL season. Healy recently cracked an unbeaten ton against Melbourne Stars and she will look to repeat her heroics on Friday.

Marizanne Kapp: She is doing a fine job with the ball for Sydney Sixers. The medium pacer has taken eight wickets in seven matches at an impressive economy of 5.84. Marizanne took 2-18 from three overs in the last match against the Hurricanes.

Sydney Sixers have won five and lost two out of the seven matches they have played so far and are positioned third in the WBBL 2019 league standings with ten points. Wednesday's 39-run victory against Hobart Hurricanes means that the Sixers now have four wins in their previous five matches. Both their defeats this season have come against Brisbane Heat - they were outplayed on both occasions, losing the first encounter by 92 runs and the second by seven wickets.

Sydney Thunder women and Sydney Sixers women have both won five times each in the ten matches that have been played between them in the Women's Big Bash League.

Sydney Thunder women have lost two of their last three encounters against Sydney Sixers which includes the 49-run defeat in the opening match of the ongoing season at the North Sydney Oval.

The Sixers elected to bat first and posted a big total of 192 on the board when the two teams faced each other last month. The Thunder then got off to a shaky start and managed to muster only 143 in the end.

Sydney Thunder have suffered defeats to Perth Scorchers in their last two outings and another loss at this stage will make it difficult for them to finish in the top four at the end of the league phase. So obviously there is going to be plenty of pressure on them and there is a good chance that they could crumble under this pressure. Sydney Sixers, in contrast, are coming into this match having won four of their last five matches. They dominated the Thunder in the reverse encounter and that will give them a big psychological advantage. The Sixers have an in-form top-order batting and we feel they are well placed to do the double over the Thunder.

Our Dream11 team for this WBBL match is a balanced one with five players from Sydney Thunder and six from Sydney Sixers.

We have picked Sydney Sixers' Alyssa Healy as the wicketkeeper in our Dream11 team. She has been amongst the runs this season and is a good pick at 10.5 credits.

Alex Blackwell and Ashleigh Gardner are both available for 9 credits and we have picked them both in our team. Erin Burns, who bats at the top of the order for the Sixers and slips in a few overs as well, is also worth picking at 8.5 credits.

Marizanne Kapp is having a good tournament with the ball and the Sydney Sixers pacer can be picked for 9 credits. Rene Farrell has picked wickets for the Thunder this season and she too seems a good bet at 8.5 credits. We have also included Sarah Aley and Lisa Griffith at 8 and 8.5 credits respectively.

We have picked Ellyse Perry as the captain of our Dream11 team.

We have picked Nida Dar as the vice-captain of our Dream11 team. 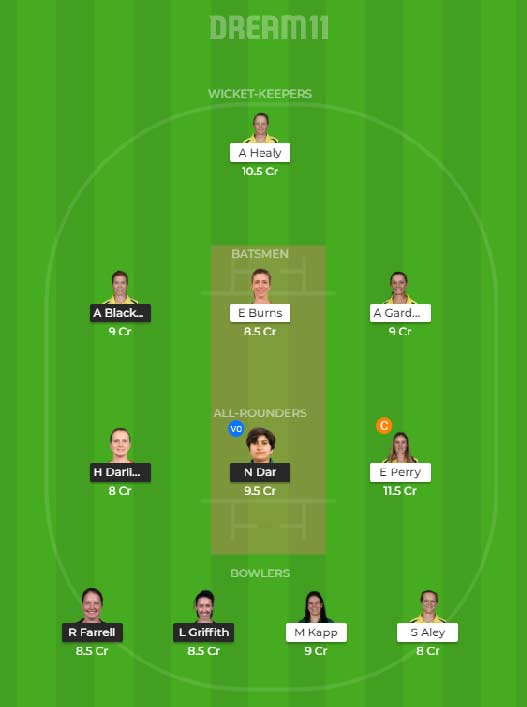