Our Pick St Kitts and Nevis Patriots are favorites to win

Who will win St Kitts and Nevis Patriots vs Barbados Tridents, CPL 2019?

St Kitts & Nevis Patriots welcome Barbados Tridents to Warner Park in the second match of their back-to-back Caribbean Premier League home games in Basseterre. The match is scheduled for September 11 and is scheduled to start at 18:00 local time.

Returning to home soil has already paid off for the Patriots, who overcame Chris Gayle’s century to chase 242 in a stunning four-wicket win against Jamaica Tallawahs last time out. That win – their first of the season – should give them plenty of momentum going into the match with the Tridents.

For Barbados, meanwhile, they have played just once and lost – bowled out for 133 as they chased 181 to beat Guyana Amazon Warriors. After finishing bottom of the league last season, it could be another tough campaign for them.

SNP vs BT, CPL 2019: Where to watch/Live streaming

Both teams won the toss in their most recent matches and elected to field first, as teams have tended to do in this competition. The Patriots, after a stunning chase last time out, may be happy to field first again this time.

Temperatures have dropped slightly and there is an increased chance of rain (though still only 20 per cent) but both teams should be hopeful of a full game in warm, mostly sunny conditions nevertheless.

Warner Park is known to be a balanced wicket, offering something for batting and bowling, but that was not evident in the first game. The batsmen went ballistic with more than 480 runs scored in the game, and the wicket should favour batting again one day on.

After Sussex’s quarter-final defeat in the T20 Blast, Laurie Evans flew straight out to play for the Patriots and was one of three changes from the side which played the first two matches. Kjorn Ottley, Mohammad Hafeez and Sheldon Cottrell were absent, with Evans, Shamarh Brooks and Dominic Drakes brought in. Cottrell was only rested according to his Twitter feed, and given the expensive bowling in his absence their star fast bowler is set to return for this one.

Devon Thomas: Proved he is in fine batting form as he followed up his 62 against Guyana Amazon Warriors with 71 from 40 balls last time out, holding an end in two vital partnerships with Evin Lewis and Laurie Evans.

Evin Lewis: Smashed three fours and six sixes in his 18-ball 53 to set the tone for the chase as the Patriots stormed to a stunning victory last time out.

Fabian Allen: Key with bat and ball last time out, taking 2-30 to put the brakes on in the final over before picking up where Lewis and Evans left off as he hit 37* from 15 balls with the bat. He now has 100 runs in three innings so far.

St Kitts & Nevis Patriots got off the mark in their first home game of CPL 2019, having lost their first two away matches before that. They were bowled out for 141 chasing 153 to beat the Trinbago Knight Riders in their first game, before falling to an eight-wicket defeat defending 153/8 against Guyana Amazon Warriors.

After conceding 241/4 against the Chris Gayle-inspired Jamaica Tallawahs last time out, they looked like they were heading for a third defeat but instead produced a stunning chase. Devon Thomas (71 from 40 balls), Evin Lewis (53 from 18) and Laurie Evans (41 from 20) got them off to a lightning start before Fabian Allen finished the job as they claimed a four-wicket win with seven balls to spare.

Replacement signings JP Duminy and Josh Lalor both started last time out, while Alex Hales – who flew straight over after the T20 Blast quarter-finals – opened the batting. Shai Hope was a notable absentee but could come into the team this time out.

Alex Hales: Fell first ball last time out, after flying out late after the T20 Blast quarter-finals – in which he hit 83* for Notts Outlaws – but the former England opener has had plenty of time to acclimatise himself now.

Jason Holder: Opened the bowling in the first game and the Tridents’ captain produced good figures of 1-31, including a maiden, from his four overs. He will also be a danger with the bat this season.

Josh Lalor: Selected on the back of some excellent form in the Big Bash League, the Aussie quick has a big opportunity to catch the eye in this tournament. He started with figures of 0-21 from three overs but has plenty more to give.

Bottom last season, the Barbados Tridents’ 2019 campaign started badly too – they lost Alex Hales first ball and collapsed to 53/5 in the eight over chasing 181 to beat Guyana Amazon Warriors. They eventually fell to 133 all out.

SNP vs BT Head to Head

St Kitts & Nevis Patriots dominate the head-to-head record in this fixture, with six wins to the Tridents’ two. That includes the last four in a row, having done the double over them in both 2017 and 2018. They chased 148 and 169 to win the two matches last season, with Fabian Allen starring in the latter as he smashed an unbeaten 64 from 34 balls to lead the Patriots to a two-wicket win.

St Kitts & Nevis Patriots got off the mark last time out and have a dominant head-to-head record so it is surprising to see they have been priced as outsiders with the bookmakers. They could upset the odds.

St Kitts & Nevis Patriots might be outsiders but they were in superb batting form in their first home game of the season and make it two wins in a row here.

Devon Thomas is in fine form for St Kitts & Nevis Patriots, having been their top run scorer in the last two matches, and he is great value at 8.5 credits behind the stumps. He may be a safer pick than Shai Hope, who is ten credits but did not play the Tridents’ first game.

Evin Lewis was another in excellent form last time out and he is worth picking up, even at ten credits. Alex Hales is the same price, but the England batsmen will expect to deliver after his first-ball duck in the Tridents’ opening game. Helping to balance things cost-wise, Johnson Charles and Laurie Evans are both 8.5 credits. The latter made a big impression in his first game last time out.

Fabian Allen’s all-round form is good – he picked up two wickets last time out and has 100 runs in three innings too. He is great value at 8.5 credits. For Barbados, Jason Holder started well with the ball and Ashley Nurse scored some late order runs. Both are capable of starring with bat and ball.

Sheldon Cottrell was rested last time out but is worth picking up after four wickets in his first two games. Alzarri Joseph took two in the last match and he is also worth backing. That leaves plenty for the final bowler. Sandeep Lamichhane bowled just one over in the opening game, but his mystery spin is a key weapon for the Tridents.

Given Fabian Allen’s all-round form, he is worth picking as vice-captain but he can often be under-bowled and bat further down the order so captain would be a gamble. Instead, Devon Thomas and Evin Lewis have already proved their batting form. The former in particular could prove a very good pick if he maintains his current scoring. 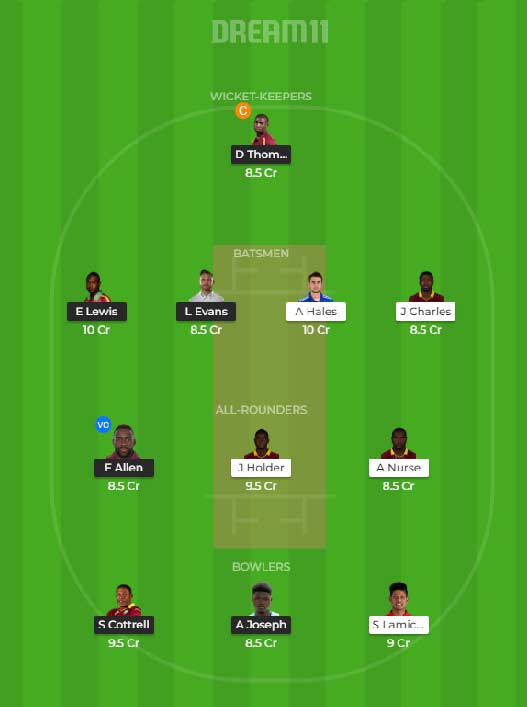 Who will win SNP vs BT?