Our Pick Durban Heat are favorites to win

Who will win Paarl Rocks vs Durban Heat, MSL 2019?

After back-to-back wins, Durban Heat will look to collect four more points when they face-off against table-toppers Paarl Rocks in this 24th fixture of the Mzansi Super League 2019. The match will be played on December 4 at the Boland Park in Paarl. Live telecast is scheduled to begin at 5:30 PM local time.

Paarl Rocks are coming off a five-wicket win over Jozi Stars in their last match at Johannesburg. Put into bat first, the Stars posted 171/3 and the Rocks managed to overhaul that total despite getting off to a shaky start. Durban Heat won their second game on the trot when they outplayed Nelson Mandela Bay Giants last time at home. The Giants scored 173/6 after electing to bat first but the hosts wrapped up the chase with a little more than an over to spare.

The previous two matches played at this venue have been won by the side batting second. And since the wicket is expected to get better for batting under lights, the team that wins the toss in this match will probably want to chase.

Clear skies have been forecast for Wednesday and so there won't be any interruptions during the game due to weather. It should be pretty cool in the evening with temperature likely to be between 20 and 24 degrees Celsius.

A good batting surface can be expected for this game. The Boland Park has hosted three matches this MSL and has witnessed 170+ being posted on three occasions. However, bowlers should find success if they pitch the ball in the right areas.

Mangaliso Mosehle and Ferisco Adams were dropped in the last game against Jozi Stars and replaced with Kyle Verreynne and Kerwin Mungroo respectively. Paarl Rocks are coming off a convincing win and so they might think of retaining the entire line-up for Wednesday's clash against Durban Heat. Henry Davids and Cameron Delport should continue to open the batting while Faf du Plessis and James Vince will take up their usual positions at three and four respectively. Bjorn Fortuin is likely to lead the team's bowling attack once again.

James Vince: He is the leading run-scorer for Paarl Rocks in this year's Mzansi Super League with 192 runs at an average of 38.40 and strike-rate of 153.60. The England batsman had smashed 86 not-out against Tshwane Spartans at this very ground. Vince has single-digit scores in his last two outings and he will be desperate to get back among the runs.

Tabraiz Shamsi: He is one of the best bowlers of the MSL 2019 having picked up ten wickets in seven matches at a pretty good economy of 6.88. The chinaman has taken five wickets at this ground this season including 3-16 against Cape Town Blitz.

Bjorn Fortuin: The left-arm spinner has also been pretty consistent with the ball. He too is among the tournament's top ten bowlers with eight wickets at a healthy economy of 6.03. Fortuin was slightly off the mark last time around and he will be expected to make a strong comeback.

Paarl Rocks find themselves in a comfortable position at the moment. They are leading the MSL 2019 points table with five wins, two losses and a washout from eight matches and have 23 points in their kitty. They had earlier won three matches on the trot before their winning streak was broken with a heavy eight-wicket defeat to Tshwane Spartans at Centurion. But the Rocks have bounced back as they beat Jozi Stars by five wickets at Johannesburg last time out.

Durban Heat will probably stick with the current group of eleven that helped them win their previous two matches. David Miller was sent ahead of captain Dane Vilas last time out against Nelson Mandela Bay Giants. The left-handed batsman struck a fine half-century and is likely to continue to bat at number four. The innings will be opened by Wesley Marshall and Alex Hales while Kyle Abbott will continue to be one of the new-ball bowlers.

Wihan Lubbe: He has scored the most runs (163) for Durban Heat this MSL and is having an impressive strike-rate of 191.76. The left-handed batsman has hit a half-century this season and has scores of 49 and 31 in his last two innings.

David Miller: He has looked in good touch with the bat since the start of the tournament and has scored 144 runs in four matches at an excellent average of 72. Miller's scores in his last three innings read 45, 26* and 50*. The Heat will want him to continue his fine form.

Keshav Maharaj: With five wickets in as many matches at a very impressive economy of 5.68, Keshav Maharaj is arguably the biggest threat in Durban's bowling line-up. The spinner returned outstanding figures of 3-15 from four overs in the last game against Nelson Mandela Bay Giants and that should really pump him up.

Durban Heat have now won two and lost as many matches out of the seven they have played so far in this year's Mzansi Super League. With 14 points in the bag, they are currently placed second from the bottom on the leaderboard. After three of their first four fixtures got wiped out due to rain, the Heat suffered a five-wicket loss to Nelson Mandela Bay Giants at Port Elizabeth. However, they have managed to keep themselves afloat in the competition with wins in their last two matches - against Cape Town Blitz and the Bay Giants.

PR vs DH Head to Head

Paarl Rocks have never lost to Durban Heat in the Mzansi Super League. The two teams have squared off three times in the tournament with the former emerging victorious on two occasions. Their most recent encounter - the 7th match of the ongoing season at the Kingsmead - had to be called off due to incessant rain.

Last year, Paarl Rocks registered a 32-run win (DLS method) in the first clash which was reduced to a nine-over-a-side contest due to rain before sealing a comfortable nine-wicket win at home when the two teams met again.

According to bookmakers, Paarl Rocks have a better chance of winning this match and they have been priced at 1.66 with Betway, Bet365 and 10CRIC. Durban Heat are being offered at higher odds of 2.20 with Bet365 and 2.15 with Betway and 10CRIC.

Paarl Rocks have the upper hand in this contest as far as head-to-head statistics are concerned; they have won both the completed matches they have played against Durban Heat in the Mzansi Super League. In addition to this, the Rocks have the advantage of playing at their home ground where they have won five of their last six matches. However, their top-order batsmen have been inconsistent this year and that would be a major concern for them heading into this game. The Heat may not have started off too well but they have begun peaking at the right time. With wins in their last two games, they have momentum on their side and we feel they could upset the odds on Wednesday.

Our Dream11 team for this match is a balanced one with five players from Paarl Rocks and six from Durban Heat.

We have preferred Durban Heat's Dane Vilas over Paarl Rocks' Kyle Verreynne as the wicketkeeper in our team. Verreynne has played just one game this season while Vilas has played five matches and has found form with the bat. Dane Vilas is available for 9 credits.

David Miller cracked an unbeaten 39-ball 50 in the last match. The aggressive left-handed batsman has been consistent and is worth picking at 9.5 credits. James Vince has been the best batsman for the Rocks and he is available for 9 credits. We have also picked Faf du Plessis and Wihan Lubbe for 10.5 and 8 respectively.

Our Dream11 team has a couple of all-rounders and both belong to Durban Heat - Ravi Bopara and Andile Phehlukwayo. Bopara is a handy middle-order batsman and he recently smashed a fifty against the Bay Giants. While he is available for 9 credits, Phehlukwayo can be picked for 9.5.

Tabraiz Shamsi has been very impressive this MSL season and he is one of the leading wicket-takers with ten wickets. Bjorn Fortuin has picked eights in seven matches while Hardus Viljoen is another good wicket-taking option. We have also included Keshav Maharaj who notched up a three-wicket haul last time. All four of these bowlers are available for 8.5 credits.

We have picked Dane Vilas as the captain of our Dream11 team.

We have picked David Miller as the vice-captain of our Dream11 team. 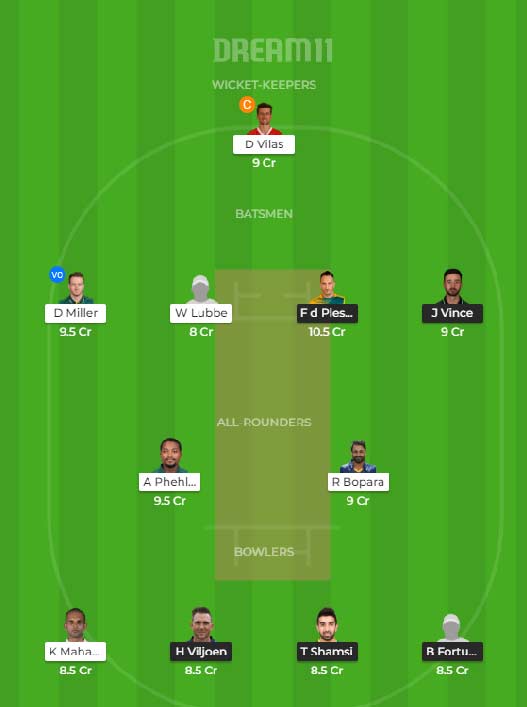 Who will win PR vs DH?