Who Will Win Nottinghamshire vs Worcestershire 1st SF, Vitality Blast 2019?

Defending champions Worcestershire Rapids will bid to reach their second consecutive Vitality Blast final when they take on 2017 winners Notts Outlaws in the first semi-final of the 2019 Finals Day at Edgbaston. The match is scheduled for September 21 and is due to start at 11:00.

Notts Outlaws finished ahead of the Rapids in the North Group, separated by a single point, and then had Alex Hales (83*) and Chris Nash (74*) to thank for a stunning ten-wicket win against Middlesex in the quarter-final.

Worcestershire, meanwhile, finished fourth in the group – having beaten Notts in their one head-to-head meeting. Their lower finishing position did not affect them in the quarter-final, however, as Moeen Ali smashed an unbeaten 120 from 60 balls in an eight-wicket defeat of Sussex Sharks.

NOTTS vs WORCS, Vitality Blast: Where to watch/Live streaming

They have picked a perfect weekend weather-wise for this T20 Blast Finals Day, with zero chance of rain forecast and conditions in Birmingham set to be sunny all day.

Edgbaston is favoured for Finals Day not just because of its size (though, of course, that is important), but because its pitch can produce some very even battles between bat and ball.

Last year’s Finals Day saw semi-final success for the teams batting first and that trend could be continued unless overhead conditions swing things towards bowling. Worcestershire lost both tosses on last year’s Finals Day, so winning is not the be all and end all. They are due this one though.

Alex Hales will be back with Notts Outlaws after his quarter-final heroics at T20 Blast 2019, having blasted straight off from that game to fulfil his Caribbean Premier League commitments. Imad Wasim is unavailable, however, due to domestic commitments and Luke Fletcher could replace him. Chris Nash is likely to keep his place after excelling as he replaced Joe Clarke for the quarter-final, meanwhile.

Alex Hales: Having top-scored in the group stage with 283 runs in ten innings, the big-hitting opener went even better in the quarter-final. In his unbroken opening stand with Nash, Hales hit six fours and seven sixes.

Harry Gurney: The paceman has already tasted T20 success this year, winning the Big Bash with Melbourne Renegades and he will look to complete a double after taking 20 wickets so far in this season’s competition.

Dan Christian: Like Gurney, Christian – who captained Notts to success in this competition two years ago too – has enjoyed success in the Big Bash already this year. His stock as an all-rounder and captain remains high in T20 cricket, backed by success across the globe.

Notts Outlaws finished the group stage with a dismal defeat to Durham, ending a run of three straight wins, as they were bowled out for 124 chasing 172 to win.

It did not cost them second place, however, and they bounced back to form in style in the semi-final. Matthew Carter was the pick of the bowlers, claiming 2-16 from four overs, as they restricted Middlesex to 160/8. In reply, Chris Nash (74*) and Alex Hales (83*) blasted Notts to a stunning ten-wicket win.

After missing the quarter-final win against Sussex, Hamish Rutherford is available again. The question then is who will miss out? Charlie Morris came into the team last time out, but it was his only appearance of the season and he appears to the be the prime candidate as a result.

Moeen Ali: His poor form for England, which resulted in him being dropped, has ended up being Worcestershire’s gain. His last four innings in the T20 Blast have brought 85*, 23, 51 and 121*. He also has four wickets in those games and took 4-18 last time they faced Notts.

Riki Wessels: Played the lesser role in partnership with Ali last time out, with a patient 47, but that continued his run of good scores in this competition and his ability to be the bigger hitter when needed is not in doubt.

Ed Barnard: Bowled well in the quarter-final, claiming 2-21 to continue his wicket-taking form in this competition. He comes in to this match on the back of a six-wicket haul in the County Championship match against Gloucestershire too.

Worcestershire Rapids missed out on second place in the North Group when they failed to defend 188/5 in their final group game – despite Moeen Ali’s batting form having continued with a half-century.

It did not prove costly, however – Ali smashing 121* from 60 balls as the Rapids’ chased 185 to beat Sussex Sharks by eight wickets in the quarter-final at Hove.

Notts vs WORCS Head to Head

Worcestershire Rapids beat Notts Outlaws in the group stage, with Moeen Ali claiming 4-18 from his four overs to restrict them to 133/9 in reply to 161/6. With their other match rained off, that was their most recent meeting. The Outlaws have the better head-to-head record, however – nine wins to the Rapids’ five.

Notts Outlaws finished ahead of Worcestershire Rapids in the group stage and have been listed as favourites for this one as a result.

Worcestershire Rapids won last season and have Moeen Ali in excellent form, but Notts – with Alex Hales and Harry Gurney to the fore – have the batting and bowling strength to win this one.

Back Notts Outlaws to beat Worcestershire Rapids at 1.72 with Betway and 1.80 with Bet365
Bet Now

Ben Cox and Tom Moores are both 8.5 credits and have similar records so far this season. Cox is slightly higher up the batting order and so might feature more prominently in this game.

Alex Hales was in blistering form in the quarter-final and justifies his ten-credit cost as a result. Ben Duckett is another good option at 9.5 credits – the same price as in-form Riki Wessels. After his quarter-final heroics, Chris Nash has made himself worth considering at 8.5 credits.

Moeen Ali is Worcesteshire’s key player and has already starred with both bat and ball since returning from England duty. He is a must-pick. Dan Christian can do both too – and his 208 points so far reflects that – but he is 9.5 credits, whereas Samit Patel is nine.

Harry Gurney has 20 wickets to his name so far this season and is another must-pick at nine credits. Pat Brown and Ed Barnard are both 8.5 credits for Worcestershire, while Luke Wood is the same price for Notts. Matthew Carter was their key man in the quarter-final and he is eight credits.

Moeen Ali is the obvious choice for captain. He has batted exceptionally since his England axing and bowled well too. For vice-captain, Harry Gurney has consistently taken wickets and is well worth picking as well. 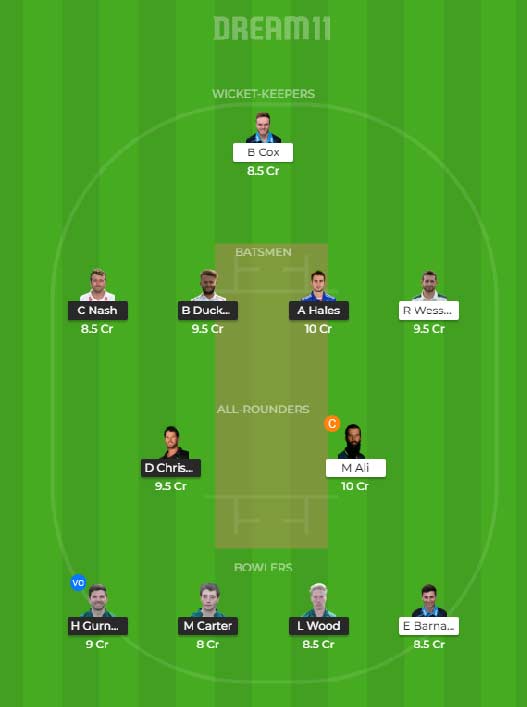 Who will win NOTTS vs WORCS 1st Semi Final?

Bet on Nottinghamshire vs Worcestershire Match