Our Pick Tshwane Spartans are favorites to win

Nelson Mandela Bay Giants and Tshwane Spartans go head-to-head in a key match at the top of the Mzansi Super League table. The winners will pull clear of the other in at least second place – and could move top. The match takes place on December 3 and gets underway at 17:30 local time.

Tshwane Spartans have won three matches this season, out of four completed games. The previous meeting with the Giants was one of three ruined by the rain, while their only defeat came last time out – when they posted 142/7 in reply to Cape Town Blitz’s 157/5.

Nelson Mandela Bay Giants also lost last time out, despite JJ Smuts hitting another half-century as they posted 173/6 from their 20 overs. They lost to Durban Heat by six wickets with seven balls to spare.

Nelson Mandela Bay Giants have won the toss in each of their last two matches but have lost both matches. Tshwane Spartans may elect to field first at Port Elizabeth.

Port Elizabeth is set to be cloudy and windy on Tuesday night, with winds close to 20mph at times and the temperature in the mid-to-high-teens. There is only a small chance of rain, however.

Port Elizabeth tends to be a slower wicket and 17 wickets fell in the last match here, but it has also been a decent enough wicket for batting.

Ben Dunk has settled into his opening role, with Matthew Breetzke missing out, while Beuran Hendricks is fit and back in the bowling attack too and Ryan ten Doeschate has been added to the team too. Despite defeat last time out, the team on show looks to be the Giants’ strongest on paper.

Imran Tahir: Took his tenth wicket of MSL 2.0 in the defeat to Durban Heat, continuing his excellent T20 bowling form.

JJ Smuts: His second half-century of the tournament so far could not bring victory last time out, but the captain now has 205 runs and four wickets in MSL 2.0.

Chris Morris: Eight wickets and some useful lower-middle-order runs have proved the Proteas’ all-rounder’s worth.

Defeats in the last two matches have halted the Giants’ momentum. They collapsed to 135 all out against Paarl Rocks, having been set 167 to win following Imran Tahir’s 2-19. Then, last time out, JJ Smuts hit a half-century to lead the Giants to 173/6 against Durban Heat, but they lost by six wickets with seven balls to spare.

The Spartans have been fairly consistent with their team selection so far, though they did mix the batting order up last time as they promoted Wiaan Mulder as a pinch hitter following a tricky start. That did not work out, however, and he could be back into the middle order this time in MSL 2019.

AB de Villiers: After back-to-back half-centuries in the wins against Jozi Stars and Paarl Rocks, the South African legend hit 31 last time out.

Pite van Biljon: His last two innings have brought 45 and now 62 runs, highlighting how he has accumulated an average of 31.17 and a strike rate of 133.04 in T20 cricket.

Morne Morkel: The veteran, giant paceman continued his good bowling form with 1-21 last time out, taking him to nine wickets in the tournament having conceded just 88 runs.

Thswane Spartans won their first three completed matches, including back-to-back wins against Jozi Stars and Paarl Rocks with Morne Morkel bowling well and AB de Villiers hitting back-to-back half-centuries. They lost for the first time last time out, however – chasing 158 to beat Cape Town Blitz, they could only post 142/7.

NMBG vs TS Head to Head

This year’s previous fixture was curtailed by rain, after Chris Morris’ 2-8 from two overs had put the Giants in a commanding position – the Spartans were 33/4 after 7.1 overs but no further play was possible. Last season, each team won once apiece in this fixture.

With home advantage, Nelson Mandela Bay Giants are favourites but the form book leans more towards the Spartans – they could upset the odds.

Nelson Mandela Bay Giants have lost their last two games and a third defeat in a row would allow Tshwane Spartans – who have generally performed well this season – to leapfrog them.

Back Tshwane Spartans to beat Nelson Mandela Bay Giants at 2.10 with Bet365.

Heinrich Klaasen remains the top wicket-keeper option on paper, even at nine credits, but team-mate Pite van Biljon’s form suggests he could be worth backing at eight credits too. He is down the order, however, so does not always bat.

Selecting van Biljon helps counter the cost of AB de Villiers too, given the Tswane Spartans’ star man is 11 credits. Given that outlay, it may be better to avoid Jason Roy, however. The England batsman has been outshone by his captain, JJ Smuts – who is really an all-rounder in T20 cricket – and opening partner Ben Dunk is a good alternative option too, particularly as he is actually behind the stumps.

Chris Morris is one of the Giants’ key men, albeit he has done more with the ball than the bat so far. The same could be argued of Roelof van der Merwe for the Spartans but both are certainly worth picking.

Imran Tahir is the most expensive bowling option but his form shows why, as once again the veteran leg-spinner has been in the wickets consistently. Junior Dala is one of their key pacemen, meanwhile, and Beuran Hendricks is back from injury too – either of those at 8.5 credits is good value. It leaves enough in reserve for Lungi Ngidi at nine credits and Morne Morkel at 8.5 credits too. Morkel has been in particularly good bowling form this season.

JJ Smuts’ batting form is good and he has chipped in with wickets too, which makes him stand out above the likes of AB de Villiers for this one. Consistency is key too, and Morne Morkel and Imran Tahir both provide that with the ball – either could be a good vice-captain at the very least if their form continues. 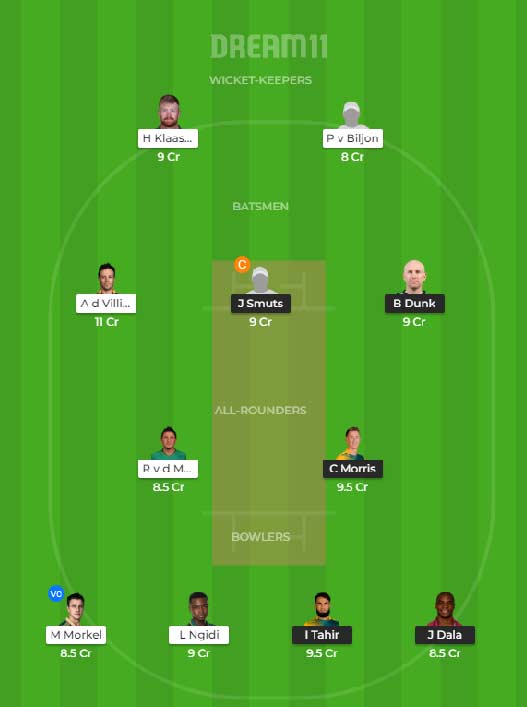 Who will win NMBG vs TS?