Our Pick Jamaica Tallawahs are favorites to win

Who will win Jamaica Tallawahs vs St Lucia Zouks, CPL 2019?

Jamaica Tallawahs and St Lucia Zouks are set to face-off against each other as both look to secure their first points of the season. This ninth fixture of the Caribbean Premier League 2019 will be played on September 12 at the Sabina Park in Kingston, Jamaica. Live telecast of the match is scheduled to begin at 7 PM local time.

Both the teams have made a poor start to their CPL 2019 campaigns with defeats in their first two matches. Jamaica Tallawahs suffered a four-wicket loss to St Kitts and Nevis Patriots in their previous match at Basseterre. After being put into bat first, the Tallawahs posted a mammoth 241 on the board but still ended up losing as their bowlers failed to defend that total. St Lucia Zouks lost to Trinbago Knight Riders by seven wickets last time out at Port of Spain. Opting to bat first, the Zouks scored a competitive 167 in their 20 overs before the Knight Riders raced home with more than two overs to spare.

JT vs STZ, CPL 2019: Where to watch/Live streaming

Since the pitch at this ground is expected to remain good for batting throughout the game and unlikely to change after the first period of play, the team that wins the toss here is more likely to bowl first.

Clear skies have been forecast for this game, and with no rain threat around, we should be able to get in a full forty-overs game. Temperature is likely to be around 28 degrees Celsius while humidity could be between 70% and 74%.

The Sabina Park hosted two CPL games last year and 170+ was scored on three occasions. This is going to be the first game of this season here and one can expect another good batting surface.

Chris Gayle, who led Jamaica Tallawahs in their opening game against Trinbago Knight Riders, has passed on the baton to Rovman Powell who captained the side last time out against St Kitts and Nevis Patriots. The Tallawahs have no injury concerns to deal with ahead of this match and they are expected to retain the same group of eleven despite the two defeats.

Chris Gayle: 'The Universe Boss' stole the show in Jamaica's last match against St Kitts and Nevis Patriots as he blitzed 116 runs off just 62 balls. Although Gayle's ton went in vain, it has taken him to the top of the tournament's runs charts. All eyes will be on the big man when he takes guard at the Sabina Park.

Andre Russell: He is another key figure in this line-up. The all-rounder took the IPL by storm earlier this year and has already made an impact with both bat and ball in this year's CPL. Russell smashed a 24-ball 44 against Trinbago Knight Riders and took a couple of wickets last time against St Kitts and Nevis Patriots.

Oshane Thomas: The fast bowler has been impressive in his short white-ball career with the West Indies and is continuing to impress in franchise cricket. Thomas had a terrific outing last time against the Patriots at Basseterre where he bagged four wickets.

Jamaica Tallawahs have not made the best of starts in this year's Caribbean Premier League, facing back-to-back defeats in their first two games. They lost their opening fixture by 22 runs against Trinbago Knight Riders at Port of Spain before going down to St Kitts and Nevis Patriots by four wickets at Basseterre. The Tallawahs have shown impressive batting performances so far, scoring 169 and 241 in the respective matches. Their bowling, however, has not been up to the mark having conceded 190+ on both occasions.

St Lucia Zouks made a couple of changes to their side in the previous match against Trinbago Knight Riders - they dropped Christopher Barnwell and Krishmar Santokie and replaced them with John Campbell and Kavem Hodge. Campbell had a good game with the bat and is likely to continue batting at number three. Rahkeem Cornwall will continue to open the innings alongside Andre Fletcher while Thisara Perera will probably be leading the team's bowling attack once again.

Rahkeem Cornwall: The opening batsman has made good contributions in both the games - 36 off 14 balls versus Guyana Amazon Warriors followed by 33 off 12 balls against Trinbago Knight Riders. With an outstanding strike-rate of 265.38, Cornwall will again look to take the Zouks off to a brisk start.

Obed McCoy: The young left-arm fast bowler has had an excellent start this season with a four-wicket haul in the very first game against Guyana Amazon Warriors at the Providence Stadium. McCoy was pretty economical in the last game against Trinbago Knight Riders, conceding only 21 runs off his 3.5 overs.

Thisara Perera: The Sri Lankan all-rounder has plenty of international experience under his belt and can be dangerous on his day with both bat and ball. Perera can smack a few out of the park to provide a late-order flourish in addition to providing crucial breakthroughs at the back-end of the innings.

Like Jamaica Tallawahs, St Lucia Zouks too are yet to open their account on the CPL 2019 points table after having played out a couple of matches. After facing a 13-run loss in their opening encounter against Guyana Amazon Warriors at the Providence Stadium, the Zouks received a hammering at the hands of Trinbago Knight Riders at Port of Spain. They came up with an improved batting performance last time out to post a very competitive total of 167 on the board. But they were let down by their bowlers and eventually lost the game by seven wickets.

JT vs STZ Head to Head

Jamaica Tallawahs and St Lucia Zouks have played eleven matches against each other in the Caribbean Premier League with the former leading the scoreline 8-3.

Jamaica Tallawahs have beaten St Lucia Zouks on the previous four occasions and they won both their encounters against them in the previous edition of the tournament.

Jamaica Tallawahs registered a comfortable 21-run victory in their most recent clash against St Lucia Zouks - during the league stage of the previous season at Gros Islet.

Jamaica Tallawahs begin as favorites to win this match at 1.57 with Bet365 and 1.58 with 10CRIC. St Lucia Zouks find themselves as outsiders for this match and they are being offered at a higher price of 2.37 on Bet365 and 2.40 on 10CRIC.

Jamaica Tallawahs and St Lucia Zouks both find themselves under considerable pressure after having suffered defeats in their first two matches. The Tallawahs have the upper hand in terms of their superior head-to-head record in addition to having the advantage of playing at their home ground. The hosts have won their last four matches against the Zouks and we expect them to make it five in a row when the two teams face-off at the Sabina Park.

Our Dream 11 team for this match is a very balanced one with six players from Jamaica Tallawahs and five from St Lucia Zouks.

Chris Gayle is coming off a brilliant century and is definitely worth picking even if he is a little expensive at 10.5. Chadwick Walton and John Campbell, who had a good game last time out, are both available for 9 credits.

Andre Russell is one of the best all-rounders in world cricket and we have picked him in our team at 11 credits. We have also included Rahkeem Cornwall and Kavem Hodge for 8.5 and 7.5 credits respectively.

We have picked two wicketkeepers in our Dream11 team, one from both the teams. Glenn Phillips and Andre Fletcher both open the batting for their respective teams and have the ability to score the big runs. Phillips is available for 9 credits while Fletcher can be picked for 9.5.

We have picked Andre Russell as the captain of our Dream11 team.

We have picked Chris Gayle as the vice-captain of our team. 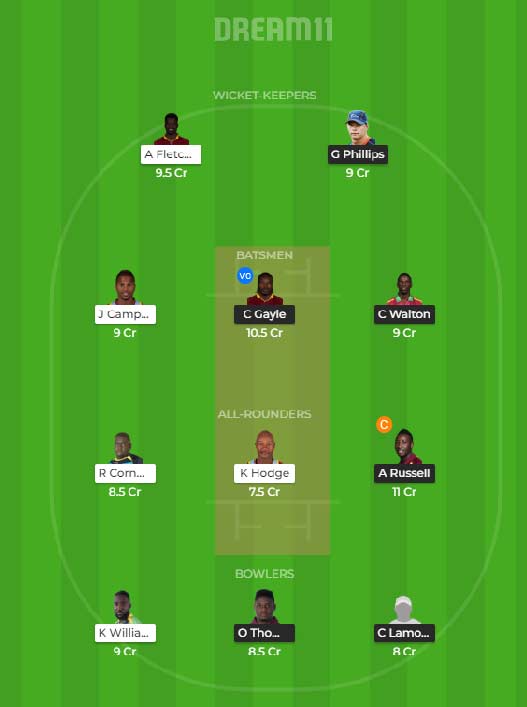 Who will win JT vs STZ?