Our Pick India are favorites to win

Who will win India vs South Africa, 2nd Test?

India will look to double their lead and maintain their unbeaten start to the ICC World Test Championship when they take on South Africa in Pune. The second match of their three-test series takes place at the Maharashtra Cricket Association Stadium between October 10 and October 14.

India, who have won all three tests they have played under the umbrella of the inaugural ICC World Test Championship, were in dominant form in the first test in Vishakhapatnam. Rohit Sharma hit a century in each innings, having opened the batting in the longest format for the first time, to help guide the hosts to victory.

South Africa were still in contention after the first innings, trailing by 71 at that point, but their bowlers were unable to make inroads as India set a big target and then ripped through the Proteas’ middle order in the second test. They have now lost three consecutive tests, having been beaten by Sri Lanka last time out too.

IND vs SA, 2nd Test: Where to watch/Live streaming

India won the toss in the first match and elected to bat, and batting first will definitely be the order of the day in this game too.

As with the first test, there is a risk of rain for much of the first five days – though the forecast for scattered thunderstorms is more prominent this time out and there could be some heavy rainfall at times during next week.

Pune, one of India’s more recently built test grounds, has favoured the batsmen in its short history so far.

India opted for Wriddhiman Saha behind the stumps last time out and two spinners – Ravichandran Ashwin and Ravindra Jadeja. Together with the decision to open with Rohit Sharma for the first time in tests, the Indian selectors were proved justified in their selections and it could be an unchanged team.

Virat Kohli: Overshadowed by Sharma and Agarwal last time out, but there is no questioning the India captain’s capability in the middle order. He played his 80th test last time out, during which time he has scored 25 centuries and 22 half-centuries.

Rohit Sharma: Promoted to open the batting in test match cricket for the first time, the big-hitting opener repaid that faith with 176 in the first innings and 127 in the second – scoring at an excellent rate too.

Ravichandran Ashwin: After taking seven wickets in the first innings of the first test, the spinner became the joint-fastest bowler to reach 350 wickets in test match cricket – taking 66 tests to clock the milestone.

India have won all three matches they have played in this inaugural World Test Championship, beating West Indies in both matches before IND vs SA 2019 series and opening this current engagement with a big win against South Africa.

Rohit Sharma (176) and Mayank Agarwal (215) set the tone when they shared a 317-run opening partnership in 82 overs and India did not look back. Ravichandran Ashwin took seven wickets to ensure India were ahead at halfway, and another Rohit Sharma century took the game away from the Proteas. Mohammed Shami then ripped through the South African batting as India claimed a 203-run victory. But for some late partnerships, it could have been even more dominant too.

South Africa may look to make changes for this second test after coming up short in the first match. Zubayr Hamza is pushing for a spot in the batting line-up, where he could replace Theunis de Bruyn, while Anrich Nortje is looking for his test match debut too. Bringing the latter in, as a third pace option, would alter the balance of the team, however.

Faf du Plessis: A first innings 50 in the first test means the South Africa captain has scored 20 half-centuries and nine centuries in his 100 test match innings to date. He averages 42.74 in the longest format.

Quinton de Kock: The wicket-keeper-batsman scored his fifth test century in the first innings of the first test, having previously been in good form in the T20is and at the World Cup before that too.

Kagiso Rabada: Took just one wicket in the first test but his ICC world ranking (second) shows what he is capable of. He comes into this tour having enjoyed some stunning form on Indian wickets at the IPL earlier this year too.

South Africa have now lost their last three consecutive test matches. Surprise defeats to Sri Lanka were followed by their heavy loss in the first game of this series. At the halfway point, there were not out of it – Dean Elgar’s 160 and Quinton de Kock’s 111 keeping the first-innings deficit to 71 after a poor start. When India raced to 323/4 in 67 overs, however, South Africa had no response. They were 70/8 in the second innings and eventually folded for 191 – a 203-run defeat.

IND vs SA Head to Head

India’s dominant form in the first test helped them to their second consecutive test victory against South Africa but only their 12th in 37 previous meetings. The Proteas have 15 wins, while there have also been ten draws. The story of the first test centred on Mayank Agarwal’s double century and Rohit Sharma’s batting exploits in both innings, while Ravichandran Ashwin and Mohammed Shami took the bowling plaudits in a dominant win.

India remain big favourites for this second test after their dominant form in the first match.

India are in superb form and if anything stops them in this match it seems unlikely to be their own performance. Weather-permitting, they can make it two wins from two.

Back India to beat South Africa in the second test at 1.44 with both Bet365 and Betway.

Quinton de Kock scored a first innings century for South Africa in the first test and he is 9.5 credits. He is more prominent in the Proteas’ batting line-up than Wriddhiman Saha is for India, however. Neither Rishabh Pant nor Heinrich Klaasen played in the first test

The two respective captains, Virat Kohli and Faf du Plessis, are both expensive picks but both could be key batsmen in this test given their reputations. The men who starred with the bat in the first test are all excellent value, meanwhile, and can help to counteract that cost – Rohit Sharma hit a century in each innings and yet he is 8.5 credits, the same as opening partner Mayank Agarwal. Dean Elgar is nine credits for South Africa.

India’s spin attack of Ravichandran Ashwin and Ravindra Jadeja are both excellent value for the hosts given their wickets in the first test and the likelihood of them playing a prominent role in the second test too. They cost 9.5 and nine credits respectively.

If you pick both Indian all-rounders, you will still need one more South African at this point. Kagiso Rabada is expensive at nine credits, considering he fell short in the first innings, but Keshav Maharaj is 8.5 credits and Dane Piedt – who batted well in the second innings – is eight credits. That leaves room for Mohammed Shami, after his excellent form continued with his second-innings five-fer last time out.

Pune is expected to be a batting wicket, so the batsmen should be the best place to look for captain and vice-captain. Rohit Sharma’s performance in the first test immediately brings him to mind and after two consecutive centuries it is hard to overlook him. Virat Kohli remains India’s star batsman, however – those two, in either order, could pay off. 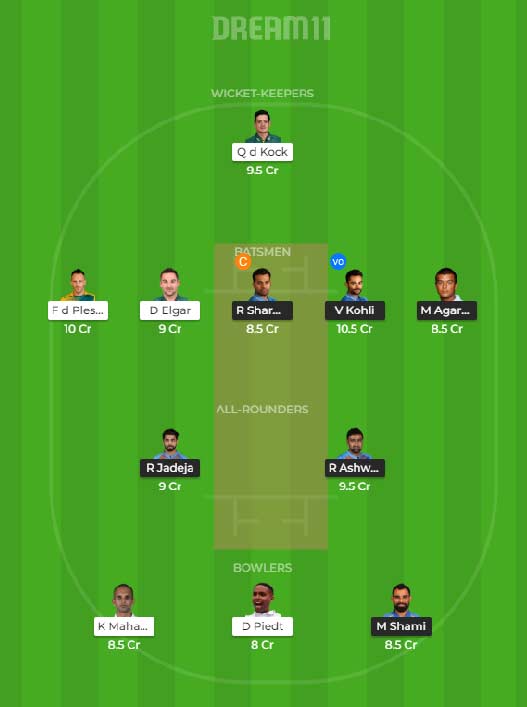 Who will win IND vs SA 2nd Test?