Our Pick Belagavi Panthers are favorites to win

Who will win Hubli Tigers vs Belagavi Panthers, KPL 2019?

Hubli Tigers and Belagavi Panthers face each other in the 2019 Karnataka Premier League at the M.Chinnaswamy Stadium, Bangalore, on August 21. The live action starts at 15:00 local time. Both teams are still looking for their first win.

Hubli Tigers have lost both matches they have played so far – scoring 154 in both matches. They suffered a six-wicket defeat to Shivamogga Lions and a nine-run loss to Bellary Tuskers.

The Tuskers also beat the Panthers, whose most recent game was rained off against Mysuru Warriors after just 11 overs.

The Panthers are due to win the toss and, if they do, could look to field first as is the general norm in Bangalore.

More rain is on the way to Bangalore – the humidity will be high again and the chance of rain is at least 50-50. It could be more frustration for these teams.

Plenty of wickets have fallen in Bangalore so far, with conditions not conducive to batting. The same could continue if there is any play possible in this match. It is not the free-scoring spectacular it might have been at the M.Chinnaswamy Stadium.

Hubli Tigers made three changes last time out but they could not change the result – losing for the second time, though maybe not quite as heavily. Consistency might be the key as they look to get back to winning ways – so David Mathias retaining his place after his two wickets, for example.

Vinay Kumar: Top-scored with 37 from 24 balls last time out – just one more innings like his might have swung the game. The Karnataka man is going to be key with bat and ball if that is anything to go by.

Mitrakanth Yadav: Took 2-26 against Shivamogga Lions in the first game and followed that up with impressive figures of 2-6 last time out with his orthodox slow left-arm bowling.

KB Pawan: Started the tournament with 53 against Shivamogga Lions and will want to bounce back after his duck last time out. He is similarly inconsistent for Nagaland too.

Hubli Tigers have lost both matches so far. KB Pawan’s half-century helped them to 154 all out against Shivamogga Lions but that proved well below par in a six-wicket defeat.

They scored the same against Bellary Tuskers, this time for the loss of nine wickets – it meant a nine-run defeat and two defeats from two games.

Though they were struggling for a breakthrough with the ball last time out, it is likely to be the same Panthers team that faces Hubli Tigers after the rain interrupted the match with Mysuru Warriors. Manish Pandey came into the team last time out, having finished in the Caribbean with India.

Zahoor Farooqi: Two wickets and a run-out off the final ball in the first game and figures of 1-6 from his two overs last time out show his quality.

Manish Pandey: One of the most notable players in this tournament, he was a little short of runs for India in the West Indies but his quality is not doubted. He has a T20i average of 37.66 and strike rate of 121.50.

Kaunain Abbas: Helped Bijapur Bulls to win the competition last season and is now the captain and wicket-keeper for the Panthers.

Belagavi Panthers suffered a narrow defeat to Bellary Tuskers first up – posting 138/8 in reply to 143/5 – but they could not bounce back last time because of the weather. They had bowled 11 overs against Mysuru Warriors, conceding 82/1, when the rain came down.

HT vs BP Head to Head

Hubli Tigers’ batsmen led them to a fourth win in five games against Belagavi Panthers when they met last season of Karnataka Premier League. Abhishek Reddy hit 74 in a total of 182/5 and Vinay Kumar claimed 4-19 in reply as they bowled the Panthers out for 138.

Hubli Tigers have lost two from two this year. They look a shadow of the team that has been in such consistent form in recent editions and the Panthers could take advantage.

Though not behind the stumps, KB Pawan hit a half-century in the first game to show his quality and is worth picking if he can replicate that form.

India international Manish Pandey is one of the few international stars on show in this tournament. He is worth picking despite his cost. Team-mate Kaunain Abbas is due a big score after being so important for the Bulls last year. For the Tigers, Krishnan Shrijith is worth 8.5 credits and that is good value.

Again, there are a lot of all-round options. Vinay Kumar starred in this fixture last season and his batting and bowling makes him a must-pick for the Tigers. For the Panthers, Dikshansu Negi could contribute with bat and ball. Aditya Somanna has been among the Tigers’ higher Dream 11 scores so far, meanwhile.

Zahoor Farooqui was in good form in the opening game and had made a good start last time out too. Shubhang Hegde was expensive last time out and might feel he has something to prove, however. For the Tigers, Mitrakanth Yadav has started the tournament in wicket-taking form and David Mathias took two in his first game last time out.

Vinay Kumar starred with the ball in this match last season and he is a key batsman too, having top-scored last time out. With the ability to score big points with bat and ball, he is an obvious pick as captain. For vice-captain, Zahoor Farooqui and Mitrakanth Yadav are both in good bowling form, but Manish Pandey brings star quality to this game and that should shine through. 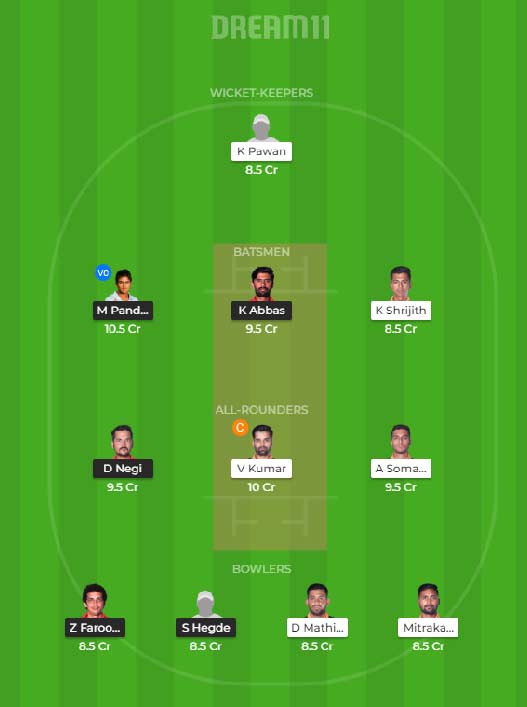 Who will win HT vs BP?