Our Pick Australia are favorites to win

Who Will Win England vs Australia 4th Test, Ashes 2019?

England have kept their hopes of regaining the urn alive as they beat Australia by one wicket in the third test at Leeds - one of the best matches to be played in the history of test cricket. The two teams have now moved to the Emirates Old Trafford in Manchester for the fourth Ashes test. The match will be played from September 4 with live telecast scheduled to begin at 11 AM local time each day.

Australia drew first blood in the series with a crushing 251-run victory in the opening test at Birmingham before the second test at London ended in a stalemate. England then managed to achieve parity in the last game at Leeds where Ben Stokes' pyrotechnics powered the hosts to a thrilling win which looked improbable at one stage. The Ashes is now nicely poised at 1-1 and both the teams will look to give their all to win this crucial match. Can England take advantage of the momentum they have gained from the last win or will Australia hit back to spoil their plans?

ENG vs AUS, 4th Test: Where to watch/Live streaming

A pleasant weather has been forecast for this fourth Ashes test. Although a few showers are expected on the third and fifth day, there should still be plenty of time for a result. Temperatures are likely to remain around 14-16 degrees Celsius throughout the match.

The Old Trafford generally offers very good conditions for batting, especially during the first couple of days of a test match. The amount of assistance for the seam bowlers will depend on how much grass has been left on the pitch. Spinners are likely to come into play from day four onwards.

The pitch is expected to be the best to bat on at the start of the match and scores tend to drop at this ground as the game progresses. And also since the surface is likely to take plenty of turn on the last two days, the toss-winning captain will probably opt to bat first.

England have named a 13-man squad for this upcoming fourth Ashes test match. Somerset pace bowler Craig Overton has been picked in the team, replacing James Anderson who has been ruled out of the remainder of the tournament. The veteran seamer has not yet recovered from the calf injury he had sustained during the first test. The hosts are coming off a win and we expect them to retain the same group of eleven from last time. All-rounder Sam Curran may have to look at the proceedings from the sidelines once again. Jason Roy and Joe Denly will swap positions in the batting order with the latter set to open alongside Rory Burns.

Rory Burns: He is one of the leading run-getters of the Ashes 2019 having scored 242 runs at an average of 40.33. The left-handed opener has hit a century and a half-century in the series. Burns failed to make much impact in the last match and he will look to make amends at Manchester.

Ben Stokes: He is an absolute key figure in England's line-up regardless of the format. The ace all-rounder has scored the most runs for the team this Ashes - 327 runs at an amazing average of 81.75 - in addition to picking up eight wickets. Stokes played a gem of a knock last time and the hosts will want him to continue his excellent form.

Jofra Archer: He has been in a menacing form lately and is definitely the biggest threat in this English bowling attack. The pacer has notched up 13 wickets in just two games. He claimed eight scalps in the previous test, six of which were picked in the first innings itself.

England have played seven test matches so far this year out of which they have drawn one, won three and lost as many. They did not have the best of starts this year as they suffered a 1-2 series defeat in the West Indies against the hosts in January-February. They later thrashed Ireland by 143 runs at the Lord's before coming into the Ashes. England were outplayed by Australia in the first test of the ongoing series. They drew the second one before snatching victory from the jaws of defeat in the third test.

Australia will welcome their star batsman Steven Smith back into the side after having missed the third test due to the neck injury he had picked up while batting in the second test. Travis Head might be the one to make way for him in the line-up. The visitors may look to freshen up their pace attack and so they could consider bringing in left-armer Mitchell Starc. If he gets picked, there is a good chance that Mitchell Marsh may also be drafted into the playing eleven.

Steven Smith: Despite having been forced out of the third match due to injury, Steve Smith continues to remain at the top of the runs charts with 378 runs in just three innings. The former captain has cracked a couple of hundreds and a fifty already in the series. The world no. 2 test batsman will be raring to go out in the middle and score big again.

Pat Cummins: The fast bowler is one of the danger men with the ball in this Australian bowling unit and he will be backed by his skipper to provide the early breakthroughs with the new ball. The world's top-ranked test bowler is leading the Ashes 2019 wickets charts with 17 wickets.

Nathan Lyon: The off-spinner has been amongst the wickets in the series - 14 wickets which includes a fifer that he claimed in the first test at Birmingham. Lyon could not cause much problems for the English batsmen last time out but he is likely to play a huge role at the Old Trafford, especially in the latter-half of the match.

Australia have won three, drawn a couple and lost only one out of the six test matches they have played so far this year. After going down to India 1-2 at home earlier in the year, they swept Sri Lanka in a two-match home series. Both of those wins were quite dominating - they won by an innings and 40 runs at Brisbane before securing a 366-run victory at Canberra. The Aussies started off the Ashes with a bang, decimating the hosts to win by a whopping 251 runs. Australia were very competitive last time out even without Steven Smith in their side but they would be very disappointed having the lost the game that they should have won so easily.

England and Australia have now played 349 test matches against each other out of which 109 have been won by the former and 145 by the latter. The rest have all ended in stalemates.

The two countries have played 29 matches against each other at the Old Trafford in the game's longest format with both having won seven times each. 15 of those encounters have resulted in draws.

The previous two test meetings between these two teams at this ground have ended in draws - in August 2005 and then most recently in August 2013.

Barring the opening game at the Edgbaston which was a one-sided affair, the Ashes 2019 has been very closely contested and the urn could go either way from here. England will gain a lot of confidence from their win in the last match and they will now be playing at a venue where they have won nine and drawn two of their previous eleven tests. However, they have not been able to beat Australia here in their last six test meetings. The visitors have been very impressive on this tour. They gave the home team a good run for their money last time even in the absence of their key batsman Steven Smith, and now his return will add a lot more strength to their batting. The loss of James Anderson is certainly a big blow for England which is another reason why we are backing the Aussies to take an unassailable lead.

We have picked six players from Australia and five from England in our Dream11 team for the fourth Ashes test match.

Steven Smith, Marcus Harris and Rory Burns are the three batsmen that we have selected for our Dream11 team. Smith, who is being offered for 11 credits, is definitely worth the pick while Burns who is one of England's leading run-scorers in the series is available for 8.5. Harris is the least expensive of the trio at 8.

We have picked two England bowlers and as many Australian bowlers in our team. Pacers Stuart Broad and Jofra Archer are both looking in top form and are worth picking at 8.5 and 9 credits respectively. Pat Cummins is the world's best test bowler and he is available for 9.5 credits while spinner Nathan Lyon can be picked for 9.

Our Dream11 team for the fourth Ashes test match consists of a couple of all-rounders: Ben Stokes (England) and Marnus Labuschagne (Australia). Stokes is very expensive and is available for 11 credits but the way he has been performing with both bat and ball makes him a must-have in the team. Labuschagne can be picked for 8.5.

We have picked England's Jonny Bairstow and Australia's Tim Paine as the wicketkeepers in our Dream11 team. While Bairstow is available for 9 credits, Paine can be picked at 8. The former has performed slightly better and has hit a half-century in the series.

We have picked Steven Smith as the captain of our Dream11 team. 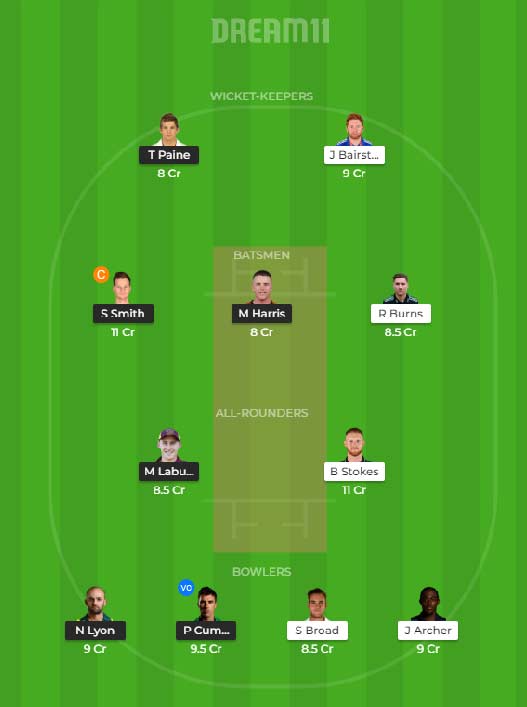 Who will win ENG vs AUS 4th Test?