Who will win England vs Australia 3rd Test, Ashes 2019?

The 2019 Ashes series continues at Headingley, Leeds, for the third of five tests. Australia continue to lead 1-0 after winning the first match, before a draw at Lord’s. The third place takes place between August 22 and August 26, with the live action taking place from 11:00 every day.

Steve Smith’s fine batting form had put the Aussies in control of this series until Jofra Archer’s hostile bowling led to him suffering concussion after being struck in the second test. If he misses out, this could be England’s chance to level the series.

The English will have taken plenty of heart from the second test, which suffered as a result of the rain. They had Australia six down in the final session when the match ended in a draw. With ICC World Test Championship points up for grabs, as well as the Ashes of course, this is a key match for the hosts.

ENG vs AUS, 3rd Test: Where to watch/Live streaming

Australia have won the toss twice so far so, on his home ground, Joe Root is due to win this time out. The England captain could elect to field first and get at the Aussies early on.

The forecast for Leeds is vastly better than that which beset the second test at Lord’s. Temperatures should be in the 20s, with Friday and Saturday particularly good according to the forecast. The chance of rain is low.

A balanced Headingley wicket can benefit both batsmen and bowlers, with the overhead conditions usually a bigger factor. On a warm, sunny week as has been forecast, it could be something for the batsmen – but the pitch is unlikely to change dramatically over the five days.

England have named an unchanged squad for the third test, with James Anderson still being assessed after his calf injury. The Lancashire bowler will play second XI cricket this week and will definitely not feature at Headingley. Instead, England must decide between Joe Denly, Jason Roy and Sam Curran. Curran’s bowling may swing the balance his way, with neither Denly nor Roy in good batting form. Roy in particular has struggled up the order, and if he does play this could well be his last chance to prove his worth as a test-match opener.

Jofra Archer: His hostile pace bowling made the difference in the second test. He of course did not mean to injure Steve Smith, but the speed he was bowling was phenomenal – the big pace bowler took five wickets on his test debut at Headingley.

Rory Burns: A century in the first test and a very patient half-century in the second have proved vital given England’s struggles at the top of the order. The Surrey batsman could be key.

Joe Root: On his home ground, the stage is set for the England captain to deliver the sort of performance that could swing this series and write his name into Ashes folklore. The Yorkshireman is due a big innings.

England’s test form has been up and down and that has been reflected in this series. They let big chances slip in the first test, as Australia eventually wrapped up a 251-run win, but enjoyed some good spells at Lord’s last time out. They eventually set the tourists 266 to win in a rain-affected match, and had them 154/6 after Jofra Archer’s three wickets in the second innings when the match ended.

The big question centres around Steve Smith’s fitness, with the Aussies’ star batsman a major doubt after his concussion in the second test. He was struck on the neck when batting and Marnus Labuschagne could replace him this time out, having become the first ever concussion substitute last time out.

Pat Cummins: Followed up his seven wickets in the first test with six more at Lord’s, including captain Joe Root for a golden duck in the second innings. He has established himself as the stand-out leader of this pace attack.

Matthew Wade: After his century in the first test, he could be a key figure in the middle-order if Steve Smith misses out. He is, after all, one of the few other Australian batsmen to have put the English bowlers to the sword at some point in this series.

Nathan Lyon: Three more wickets in the first innings of the second test took him to 12 for the series after his match-winning bowling in the first test. The spin-bowler could be a key figure if the overhead conditions lend themselves more to the batsman than the pacemen.

In the second test, Australia could not impose themselves in the same way despite some good spells. They eventually saw the game out to earn a draw on the final day, closing on 154/6 as they prevented England bowling them out.

The second test at Lord’s ended in the 95th test match draw between the two sides. Australia have won 145 tests while England have 108 victories.

Australia have not won an Ashes series in England since 2001, but the tourists lead the current series 1-0 after Steve Smith’s batting excellence in the first test was backed by the bowling of Pat Cummins and Nathan Lyon.

England are favourites to level the 2019 Ashes in this third test according to the bookmakers.

England have a big opportunity to hit back in this third test and it is a chance they must take. The hosts are favourites and showed enough signs in the second test that they can live up to that.

England to beat Australia at 1.83 with Bet365.
Place Your Bet Now

Jonny Bairstow and Jos Buttler are the choices for England and Matthew Wade and Tim Paine are the options for Australia. Wade hit a century in the first match but Jonny Bairstow could be a good pick here having recaptured a bit of form last time out – this is his home ground, after all.

Joe Root is another set to play on his home ground and the England captain is due a big innings. With Steve Smith out for Australia, their key man could be David Warner, though Usman Khawaja is in slightly better form. Alongside Root, Rory Burns will be key for England – he has been in good form at the top of the order.

Ben Stokes hit a century in the second innings of the second test and could be a key figure once again. Sam Curran is fighting for a start and is 8.5 credits, but that would be a huge risk if he does not play. Travis Head, on the other hand, is the same price and a safer bet.

For Australia, Pat Cummins and Nathan Lyon are the key bowling figures and both have been in good wicket-taking form with 25 between them so far. England’s pace attack looked reinvigorated with Jofra Archer in the team, however. Archer bowled with real hostility on his test debut, while Stuart Broad and Chris Woakes have been in the wickets in both tests.

With Steve Smith injured, there could be a new game changer in this match. Joe Root is a risky pick given he has not hit top form yet, but the England captain could be key on his home ground. Vice-captain may be slightly safer. As captain then, Pat Cummins took 13 wickets in the first two matches and could be a safe pick for more points. 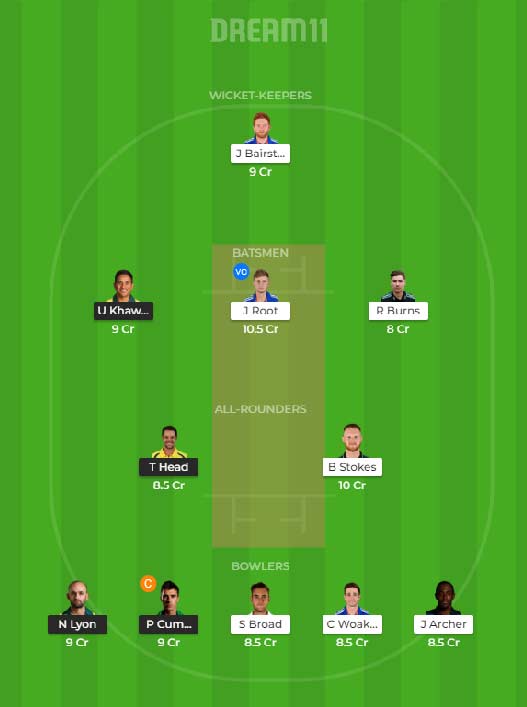 Who will win ENG vs AUS 3rd Test?