Our Pick Australia are favorites to win

Who will win England vs Australia 2nd Test, Ashes 2019?

The 2019 Ashes series moves to Lord’s Cricket Ground, as the hosts look to hit back after a crushing defeat in the opening test at Edgbaston. England have not lost a home Ashes series since 2001, and the hosts need to bounce back at HQ.

Australia, led by Steve Smith’s excellent batting, recovered from a poor start on the opening day to eventually cruise to victory – England suffering in the field after James Anderson’s calf injury early on the first morning.

ENG vs AUS, 2nd Test: Where to watch/Live streaming

Australia won the toss in the first test and elected to bat first – a decision which nearly backfired before Steve Smith turned the game on its head. If Joe Root wins the toss this time, he may want to have the first crack at the Lord’s pitch with the ball.

Regular showers are forecast throughout the week in London, with the second day perhaps the best (and warmest) according to the forecast. It could be a frustrating, stop-start week of cricket at Lord’s – particularly on the first day when the rain is set to be pretty relentless throughout the day.

The Lord’s slope famously offers something for the bowlers, with a place on the Lord’s honours board reserved for the very best batsmen as a result. The last test match at Lord’s, against Ireland, ended with Stuart Broad and Chris Woakes in supreme bowling form – the pitch combing with the sort of overhead conditions expected this week too. Lord’s is very much a wicket where pitching the ball up, particularly with so much cloud around, will get wickets.

James Anderson has been ruled out of the second test with the calf injury that saw him forced out early in the first match too. Jofra Archer has proved his fitness and is expected to replace Anderson, making his test debut as a result, with Olly Stone also injured. Moeen Ali has also been dropped, with Jack Leach replacing him.

Stuart Broad: Passed 450 test wickets in the first match of the series and, once he pitched the ball up, he was in outstanding form last time England were at Lord’s too. In Anderson’s absence, he will lead the bowling attack.

Jofra Archer: England’s wildcard, Archer’s pace and bounce at the World Cup helped them to victory. Now set for his test debut, he offers something very different to the rest of the pace attack and could be a key weapon as England look to dull Australia’s batting threat.

Joe Root: The England captain needs to deliver with the bat, with too many inconsistent performances around him. His own form has been inconsistent, but he did hit a half-century in the first innings of the first test and still averages 48.94 in test cricket.

England’s form in test cricket has dipped while they pursued one-day glory – a successful venture, but one which has seemingly come at a cost to the red-ball team. Victory against Ireland in their one-off test – recovering from a dreadful start as Stuart Broad and Chris Woakes bowled them to success on the final day – barely papered over recent cracks.

They lost 2-1 in the West Indies prior to this latest English summer, and then lost the first test of this series after failing to take advantage of having Australia 122/8 during the first innings. The eventual 251-run defeat reflected the eventual difference between the two teams across the five days.

After being overlooked for the first test, Mitchell Starc and Josh Hazlewood staked their claims for a return by bowling well in the warm-up match against Worcestershire. They shared five wickets between them in that game. Peter Siddle and James Pattinson are the men they are competing with, and Starc has been tipped to replace the former.

Steve Smith: In his first test match since his ban for his role in the ball-tampering scandal, Steve Smith reminded everybody of his supreme batting ability with his 24th and 25th test centuries. England simply had no answer as he hit 144 and 142 in his two innings.

Nathan Lyon: The spinner ripped through the England batting on the final day, claiming 6-49, and he is expected to thrive on all surfaces throughout this series after finishing with nine wickets in total in the opening game.

Pat Cummins: Seven wickets in the first test, after being selected to lead the bowling attack, and he will be one of the key men at Lord’s too – regardless of whether it is Starc, Pattinson or Siddle he shares the new ball with.

Australia came into Ashes 2019 series on the back of beating Sri Lanka 2-0, bouncing back from a 2-1 series defeat to India in the process. The win against Sri Lanka was Australia’s first since beating England in the 2017/18 Ashes series.

Australia’s bowlers were key to their win in both tests against the Sri Lankans, bowling the tourists out for 144, 139, 215 and 149 as they claimed wins by an innings and 40 runs and then 366 runs. They continued that form in this first Ashes test, with Steve Smith back in the side and excelling with the bat. After a tricky start, they eventually stormed to a 251-run victory.

Victory in the first test was Australia’s 145th in test matches against England. England have won 108 by contrast, with 94 draws. Australia won the last series, at home, 4-1 as they ruthlessly beat the tourists to reclaim the Ashes.

In England, however, it is a different story – England have not lost a home series to Australia since 2001. Nevertheless, Steve Smith’s batting and the combined bowling efforts of Nathan Lyon and Pat Cummins mean Australia lead this current series 1-0.

After their dominant first test win, Australia are priced lower than England to win at Lord’s. The weather forecast means the draw is favourite, however.

Australia, and Steve Smith in particular, were simply too good in the first test and it is hard to see how England can turn things around. The weather forecast is dreadful, however, and the draw might be the better bet as a result.

England and Australia to draw the second test at 2.62 with both Bet365 and Betway
Place Your Bet Now

There are two choices for each team as wicket-keeper. Jonny Bairstow’s form has not been good in recent test matches, while Jos Buttler failed to impose himself for England in the first match either. Matthew Wade hit a century for Australia, however, and Tim Paine is good value at eight credits.

In-form Steve Smith is 10.5 credits but will be worth every single one of those if he continues the form he showed in the first match. Joe Root is the same price and needs to have a similar impact for England. Their best batsman in the first test, however, was Rory Burns and he is great value at just eight credits. Other batting options include David Warner and Usman Khawaja, though both may be a little too expensive. Jason Roy and Cameron Bancroft are better value at 8.5 credits, though both have plenty to improve on after the first test.

Ben Stokes is the main out-and-out all-rounder available for selection, while Travis head is listed for Australia. With Moeen Ali not in the squad, those two are the only two likely to feature and both are worthy of selection. Head could be swapped for an extra bowler, however.

The bowlers are expected to have the most telling impact on this series and both sides are blessed with plenty of bowling talent. Pat Cummins and Nathan Lyon starred in the first test and are each good value at nine credits apiece. Chris Woakes and Stuart Broad are 8.5 credits, meanwhile, as is expected debutant Jofra Archer. That leaves 8.5 credits for either Head or another bowler. Mitchell Starc is 8.5 credits, as is James Pattinson.

Steve Smith’s batting form makes him hard to look beyond. England had no answer to him and he could rack up some more big scores if the weather allows. Ben Stokes offers something with bat and ball, meanwhile, and Chris Woakes and Stuart Broad both enjoyed bowling at Lord’s last time out – and are no mugs with the bat either. Smith is the obvious choice as captain; Woakes could deliver as vice-captain. 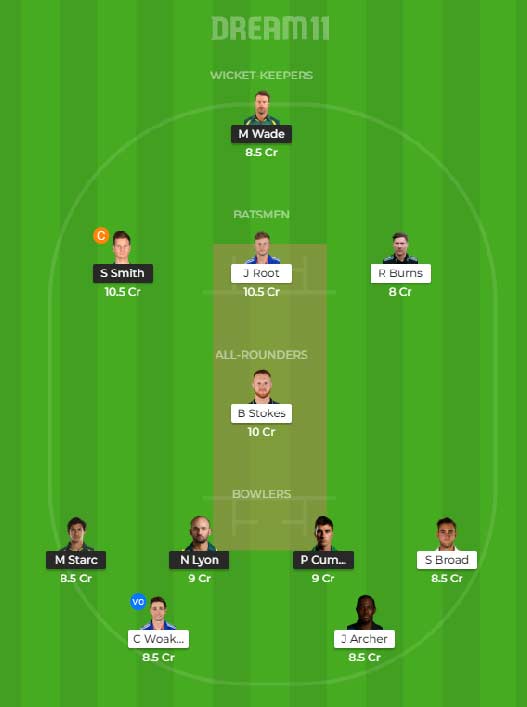 Who will win ENG vs AUS 2nd Test?