England have been basking in the World Cup glory for the last couple of weeks but now it's time for them to turn their attention towards the Ashes - the biggest rivalry in test cricket. The hosts will look to regain the urn from Australia who had dominated them in the previous edition Down Under. Their preparations for this marquee tournament, however, did not go as per their liking as they found themselves struggling at one stage in the recent four-day test against Ireland at the Lord's, and that game would have served as an eye-opener for them.

The 71st edition of the Ashes will kick-off from August 1 with the opening test at the Edgbaston in Birmingham. This is the same venue where the two teams faced-off in the World Cup semi-final not long ago and the Aussies will want to avenge their humiliating loss from that game. Live telecast of the first Ashes test is scheduled to begin at 11 AM local time each day of the match.

ENG vs AUS, Ashes 2019.: Where to watch/Live streaming

Decision-making is not going to be easy for a captain upon winning the toss on Thursday. While the last three test matches played at this ground have all been won by the side batting first, the dicey weather conditions could tempt the toss-winning skipper in opting to bowl first instead.

The first Ashes test could be affected by rain as intermittent showers have been forecast throughout the match. The meteorological department is expecting thundery downpours on the eve of the match. Thursday is likely to be windy with plenty of cloud cover while Friday could see a few rain interruptions. The weather will be cool for all the five days with temperatures as high as 20-21 degrees Celsius.

The pitch at Edgbaston has generally been good for batting early on with 308 being the average first-innings score in tests. However, there could be moisture underneath the surface due to the expected overnight showers and that should mean plenty of movement for the seam bowlers, especially during the first session with the new ball.

England have picked fast bowler Jofra Archer in their 14-man squad to take on Australia in the first Ashes test. However, he might not be unleashed straight away and would have to wait a little longer for his test debut. Chris Woakes is more likely to be given the nod for the role of third seamer with Stuart Broad and James Anderson confirmed to lead England's bowling attack. Jos Buttler and Ben Stokes, who were rested for the four-day test against Ireland, have returned. The hosts are expected to open their batting with Jason Roy and Rory Burns while Joe Denly could be brought in to solve the team's prolonged number three problem followed by skipper Joe Root at four.

Joe Root: With a healthy batting average of 49.51 in test cricket, Root is the rock of this English batting line-up. The skipper has scored the most runs at the Edgbaston from the current squad - 396 runs which includes a century and three fifties from four test matches.

James Anderson: The name itself is enough to strike fear into the opposition's batting group. The veteran swing bowler, with 575 wickets under his belt, is the leading wicket-taker for England in tests. He has also taken the most wickets at this ground - 44 (including a couple of fifers) in 10 matches.

Ben Stokes: The hero of England’s World Cup final is a danger man whether he has the bat or the ball in his hand. The all-rounder has six test centuries and a double hundred to his name in addition to picking 127 wickets (including four five-wicket hauls) in 52 matches.

England have won three of their last four test series and have won ten of their last thirteen matches in the The Ashes format. After drawing 1-1 with Pakistan in a two-match series at home, they thrashed India 4-1 in another home series before heading off to Sri Lanka where they swept the hosts in a three-test series. Their next test assignment came in the West Indies where they suffered a shock 1-2 loss. England's most recent test encounter came only last week against minnows Ireland at the Lord's and they ended up winning the match by 143 runs.

David Warner, Steven Smith and Cameron Bancroft have returned to the Australian test setup following their completion of the ball-tampering ban. Wicketkeeper Matthew Wade, pace bowler James Pattinson and all-rounder Mitchell Marsh have also been called up to the 17-man squad. Nathan Lyon is the lone specialist spinner in the side and a confirmed starter for this opening game along with James Pattinson, Pat Cummins, Steven Smith, skipper Tim Paine and Usman Khawaja who has now been cleared fit to play. Mitchell Starc, Josh Hazlewood and Peter Siddle are fighting for the third seamer spot and it is Starc who will likely be the selectors' preference. Australia are also faced with the opener conundrum - they are yet to take a decision on David Warner's partner and will have to choose between Marcus Harris and Cameron Bancroft.

David Warner: The opener is a key man for Australia irrespective of the format. He will be stepping into the test arena for the first time after the completion of his ban and will have a point to prove. Warner was the second-best batsman in the World Cup having scored 647 runs in 10 matches and he will look to translate his ODI success to the longest format.

Steven Smith: Like David Warner, Smith too will be playing his first test match since the ball-tampering scandal in South Africa last year. The Edgbaston crowd is likely to boo him but that would only pump him up. The world number four test batsman has scored 6199 runs in the format which includes 23 centuries and 24 half-centuries.

Pat Cummins: The Australian quick is the world's best bowler in test cricket with 94 wickets (7 four-fers and 4 fifers) in 20 matches. He finished as the leading wicket-taker in Australia's previous test series against Sri Lanka with 14 wickets that even included a ten-wicket haul.

Australia have not been as consistent as England when it comes to the longest format of the game. They have won only three and lost six of their last ten test series and have been able to win only three of their last eleven matches. After drubbing England in the Ashes series last year, the Aussies lost their next three series on the trot - in South Africa (1-3), against Pakistan in the UAE (0-1) and India at home (1-2). They, however, dominated Sri Lanka 2-0 at home in their most recent test series played earlier this year in January-February.

England and Australia have played 346 test matches against each other with the former winning 108 of those and the latter 144 while the rest have all ended in stalemates.

The two teams have faced each other 14 times at the Edgbaston in the game's longest format with the hosts leading the scoreline 6-3. Five of those encounters have produced draws.

England registered a win the last time these two countries faced-off in a test match at this ground - in July 2015. The match lasted only three days with the home team emerging victorious by eight wickets.

England vs Australia in the Ashes

The head-to-head record for these two teams in the Ashes is a very close one. England and Australia have been involved in 70 series since 1882-83 with 32 of those been won by the former and 33 by the latter. Only five Ashes series between them have ended in a draw.

Out of the 330 Ashes tests, 106 have been won by England and 134 by Australia with the remaining 90 all having ended in draws.

The most recent Ashes was played from November 2017 till January 2018 in Australia where England lost the urn after suffering a 0-4 defeat.

ENG vs AUS in the Ashes

The Edgbaston has produced only 3 draws in its last 17 test matches. Even though a few rain interruptions have been predicted for this match, we still feel there will be enough time left for a result given the formidable pace attacks of both the teams. England's first-innings debacle with the bat in the recent four-day game against Ireland would have made the English fans worried, but the return of Jos Buttler and Ben Stokes will add significant strength to the team. The hosts have an impressive record at this venue and we expect them to squeeze out a win in this closely-fought first Ashes test and go 1-0 up in the series.

England to beat Australia at 1.95 with Betway and 1.90 with Bet365 and Betrally.
Place Your Bet Now

Our Dream11 team for the first Ashes test match is a very balanced one consisting of six players from England and five from Australia.

Joe Root and Steven Smith are the key batsmen for their respective sides and both are available at 10.5 credits. We have also included David Warner who was Australia's best batsman in the World Cup along with England's Joe Denly. While Warner has been priced at 10 credits, Denly can be picked at 8.

James Anderson and Stuart Broad will be lethal in these conditions and are a must-have in any Dream11 team. We have also picked Australia's Pat Cummins and Mitchell Starc. Broad is available at 8.5 credits while the other three bowlers can be picked at 9 credits each.

Moeen Ali and Mitchell Marsh are the two all-rounders in our Dream11 team and they can be picked at 8 and 8.5 credits respectively. Ben Stokes is another tempting option. But he has been priced at 10 credits and we would have had to sacrifice David Warner to include him.

Jonny Bairstow has shown better form with the bat of late which is why we have picked him at 9 credits as the wicketkeeper in our team instead of Australia's Tim Paine.

We have picked James Anderson as the captain of our Dream11 team. 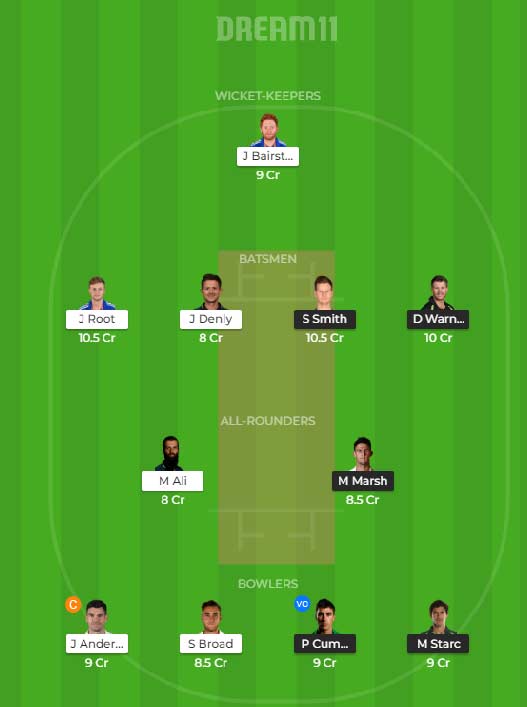 Who will win ENG vs AUS 1st TEST?