Our Pick Paarl Rocks are favorites to win

Who will win Durban Heat vs Paarl Rocks, MSL 2019?

Durban Heat take on Paarl Rocks at Kingsmead as the hosts try again to beat the weather and get their MSL 2.0 campaign underway. The match is scheduled to start at 17:30 local time on November 15.

The Heat suffered a washout first up and the forecast in Durban is not good this time either. It will be more frustration for the Heat who, having recruited last year’s winning captain, Dane Vilas, will want to start proving they can improve on last season’s last place.

Paarl Rocks, meanwhile, will want to back up their superb opening win. Proteas captain Faf du Plessis led the way with the bat, hitting 38, but the bowlers took centre-stage. Hardus Viljoen’s two early wickets set the tone and the Rocks carted Cape Town Blitz out for 84.

Paarl Rocks won the toss and elected to bat first last time out but Durban Heat will know these are bowl first conditions if they get the opportunity to pick.

Typically humid Durban conditions await and there could be more weather-related frustration with rain forecast all day and the chance of showers still 55 per cent in the evening.

Kingsmead tends to be a seamers wicket, and with atmospheric conditions set to favour the bowlers too, it could be a bowling day.

Durban Heat are still waiting to get their 2019 Mzansi Super League campaign underway. They are without Robbie Frylinck for the tournament, who withdrew after picking up a T10 contract – Wesley Marshall is his replacement in the squad.

Alex Hales: The big-hitting England opener will not have ruled out playing in the T20 World Cup next year, so he needs to take these opportunities to make his mark. He was a key player for Notts Outlaws as they reached the T20 Blast semi-finals, before winning the CPL with Barbados Tridents.

Ravi Bopara: The Essex all-rounder helped the Eagles to victory in the T20 Blast, including scoring 36* after taking 2-30 in the final. He remains a key player with bat and ball in T20 cricket.

Kyle Abbott: The paceman took his 150th wicket in T20 cricket while playing for Hampshire in the T20 Blast, finishing the tournament with eight wickets in his final four appearances. He took 17 wickets in a first-class match to continue his fine bowling form in September.

Durban Heat finished bottom of the table last season but did win their final two games. They are yet to get this season’s campaign underway, however, after their opening match against Tshwane Spartans was rained off.

With Aiden Markram due to miss the tournament injured, Paarl Rocks’ line-up leant more towards their bowlers in the first game but it paid off as they claimed a dominant win. That could tempt them to keep the current balance, though James Vince could slot in at the top of the order now he is available after England duty.

Hardus Viljoen: Continued his wicket-taking form as he took 2-9 from two overs last time out to win the man-of-the-match award. He now has 136 wickets in 118 T20 appearances, starring across the globe.

Bjorn Fortuin: After taking three wickets in his first two South Africa matches in September, he was back to his wicket-taking, economical best last time out. He took 2-13 from three overs to move to 70 wickets in 54 T20 innings.

Paarl Rocks started MSL 2019 tournament in excellent form. Faf du Plessis and Henry Davids each hit 38 in a total of 170/9, before the bowlers tore through Cape Town Blitz – Tabraiz Shamsi (3-16), Hardus Viljoen (2-9) and Bjorn Fortuin (2-13) all starred as they bowled the Blitz out for 84.

DH vs PR Head to Head

Paarl Rocks won both matches against Durban Heat last season, and quite comfortably on both occasions too. A lightning-fast start to a rain-reduced match at Durban saw the Rocks post 98/2 from nine overs, and the Heat got nowhere near a revised target of 113 – Bjorn Fortuin taking 2-6 as they finished 80/6. In the second meeting, Durban batted first and posted 154/6 but Faf du Plessis’ unbeaten 76 from 48 balls helped the Rocks to a nine-wicket win.

The bookmakers are split on this one, with both teams listed at 1.90 to win with Bet365.

Durban Heat did not get the chance to showcase their batting line-up last time out, but captain Dane Vilas will be a key part of it and that is reflected in the fact he is the more expensive wicket-keeper at nine credits.

Faf du Plessis showed why he is worth 10.5 credits when he hammered 38 from 20 balls last time out. The Proteas captain is one of the key players in this game. Durban have their own big-hitting duo in Alex Hales and David Miller – both are worth picking up too – while Cameron Delport is 8.5 credits, which makes him slightly better value than James Vince and Henry Davids at nine credits apiece.

Dwaine Pretorius proved his worth last time out, picking up 69 points in the process. Ravi Bopara will be a key all-rounder for Durban Heat, meanwhile – he could even outshine Andile Phehlukwayo, despite the latter costing 0.5 credits more.

The Paarl Rocks trio of Bjorn Fortuin, Tabraiz Shamsi and Hardus Viljoen were all in excellent bowling form last time out. Durban favours seam bowling, so Viljoen and Kyle Abbott could be the men to watch this time.

Ravi Bopara has been in good T20 form with bat and ball and so could prove a useful Dream 11 captain choice. Dwaine Pretorius proved his worth last time out too, but Hardus Viljoen’s wicket-taking record in T20 cricket – after two more last time out – makes him worth considering. 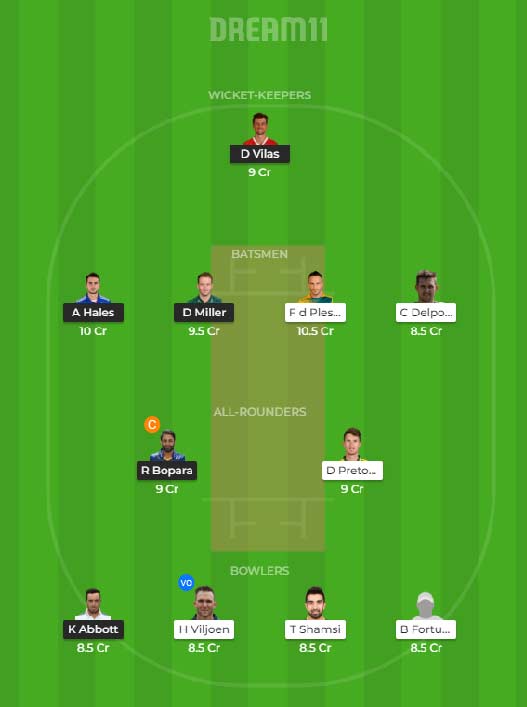 Who will win DH vs PR?