Our Pick Deccan Gladiators are favorites to win

Who will win Deccan Gladiators vs Delhi Bulls, T10 League 2019?

Two of the T10 League’s new franchises get their tournament underway when Deccan Gladiators meet Delhi Bulls in a Group A fixture at Abu Dhabi’s Sheikh Zayed Cricket Stadium on November 15. The live action starts at 18:45 local time.

Deccan Gladiators are led by icon player Shane Watson and have one of the strongest-looking teams on paper, though two key players – Kieron Pollard and Sheldon Cottrell – are currently on international duty.

Delhi Bulls are also captained by their icon signing – England captain Eoin Morgan. Their preparations have been hit, however, by the fact Shoaib Malik, Sohail Tanvir, Mohammad Hasnain and Aamer Yamin have had their NOCs withdrawn by the Pakistan Cricket Board.

Teams tend to field first upon winning the toss in this tournament – after their misfortune with their Pakistan players having their NOCs removed, Eoin Morgan and the Bulls are due some fortune at the toss.

Conditions are set fair for the day in Abu Dhabi, with temperatures in the high 20s and no chance of rain on the forecast.

The Sheikh Zayed Cricket Stadium will see plenty of runs thanks to its good bounce and lightning-fast outfield, but the pitch does offer some redress for the bowlers too.

Kieron Pollard and Sheldon Cottrell will miss the start of the tournament due to international duty, but Zahir Khan and Mohammad Shahzad are not in the Afghanistan squad in that series. Asif Khan and Anwar Ali’s participations are in doubt as the Pakistan Cricket Board have removed his NOC – though the Gladiators have been much less affected than some other teams.

Shane Watson: Set to lead the team, having been signed as marquee player too. The Australian veteran finished the IPL in superb form, scoring 50 and 80 in his final two games. He has a T20 strike rate of 138.74.

Chandrapaul Hemraj: Announced himself with some excellent all-round performances in the Caribbean Premier League, batting brilliantly at the top of the order and bowling superbly in later games too.

Anton Devcich: The 34-year-old is an explosive hitter at the top of the order and useful option with the ball too. He scored 62 in the first of two warm-up matches against the touring England team in his most recent T20 action.

Deccan Gladiators are new to the T10 League.

Delhi Bulls acted swiftly to replace their four Pakistan players – Shoaib Malik, Sohail Tanvir, Mohammad Hasnain and Aamer Yamin – after their NOCs were removed. David Willey, Ravi Rampaul, Angelo Mathews and Dushmantha Chameera have been signed in their place. Nevertheless, it was less than ideal preparation for a team who are already without Mohammad Nabi and Sherfane Rutherford for the start of the tournament due to the ongoing Afghanistan vs West Indies series.

Eoin Morgan: The England captain was in excellent form as he led the team to T20i series victory against New Zealand and he is among the leading players on show in Abu Dhabi for this tournament too.

Paul Stirling: The big-hitting Irish opener scores runs at the top of the order and generally scores them very quickly. As Ireland qualified for the ICC T20 World Cup, he hit three half-centuries at the Sheikh Zayed National Stadium.

Angelo Mathews: The former Sri Lanka captain is back out of favour for his country, but he is a more than adequate replacement for Shoaib Malik, offering big hitting and experience.

Delhi Bulls are another new franchise set for their T10 debut.

DGL vs DB Head to Head

This will be both teams’ first match in the Abu Dhabi T10 League.

Betway have plumped for Deccan Gladiators as very narrow favourites to beat Delhi Bulls in the opening game in Group A of the 2019 T10 League. The Gladiators are 1.87 to win with Betway, while the Bulls are 1.90 with Betway.

Deccan Gladiators are favourites with the bookmakers and they have certainly had the less disrupted preparations.

Back Deccan Gladiators to beat Delhi Bulls at 1.87 with Betway.
Bet Now

Some key wicket-keeper-batsmen will be on show on both teams. For the Gladiators, Mohammad Shahzad can set the tempo at the top of the order and has a lot to prove amidst his falling out with the Afghanistan Cricket Board. For the Bulls, Tobias Visee is out of form but Kusal Perera is another great option. All three are just 8.5 credits.

Unsurprisingly, Eoin Morgan is the most expensive batsman. With Kieron Pollard not yet available – so no competition at the top of the price scale – there is no question the England captain is a must-pick. Middlesex team-mate Paul Stirling will be looking to score big runs at the top of the order, meanwhile, and looks a better pick at nine credits than another team-mate, Angelo Mathews. Dan Lawrence, meanwhile, could be great value at 8.5 credits – he was a big player for Essex Eagles in the T20 Blast.

Shane Watson comes in at 11 credits for the Gladiators but he is absolutely central to their hopes this season. Both he and Anton Devcich could make a difference at the top of the order and their part-time bowling could be important too. David Willey, meanwhile, will bowl more than bat but with both he can be dangerous – he has opened in T20 cricket before.

Fawad Ahmed has been brilliant in franchise cricket across the globe and the leg-spinner looks great value at nine credits. Adil Rashid will be his counterpart on the Bulls’ team and the two leg-spinners will play a big role in how this game goes. Sheldon Cottrell is unavailable, but fellow West Indian Ravi Rampaul has an excellent record bowling in the death overs in T10 Cricket.

Shane Watson is 11 credits and that highlights his importance for the Gladiators. He will be at the top of the order and can go big, as well as possibly turn his arm too. Eoin Morgan is in excellent form, meanwhile, and possibly worth a go at vice-captain. 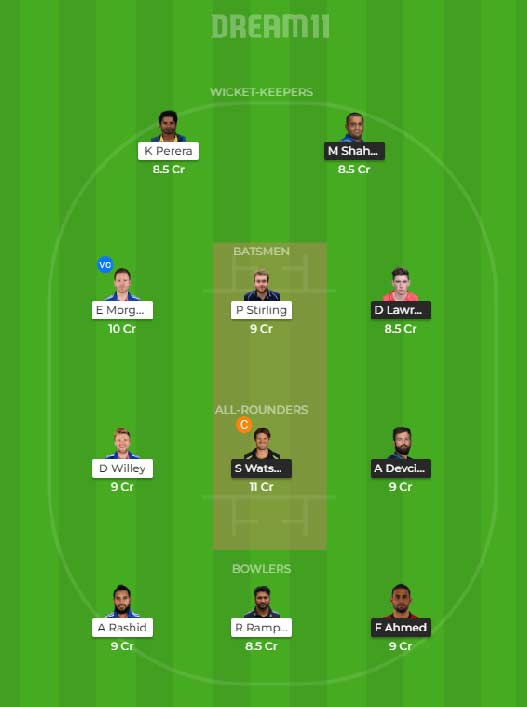