Our Pick Dindigul Dragons are favorites to win

Who will win Dindigul Dragons vs Madurai Panthers, TNPL 2019?

Having both reached the final last year, Dindigul Dragons and Siechem Madurai Panthers face each other in the second qualifier, with a place in the showpiece up for grabs. The match takes place on August 13 at Dindigul, and the action starts at 19:15 local time.

Chepauk Super Gillies await the winner, after the table-topping Dragons suffered a five-run defeat in their first play-off. They need in-form opener Narayan Jagadeesan – who scored 87* when they beat Siechem Madurai Panthers in the group stage – to tick if they are reach to the Chepauk final.

For the Madurai Panthers, meanwhile, they found resurgent form when they needed it most – culminating in their last-ball play-off win against VB Kanchi Veerans. They boast one of the top run-scorers in the competition – KB Arun Karthik – and one of the top bowlers in Kiran Akash. They start this game as outsiders, however.

DDD vs MAD, TNPL 2019: Where to watch/Live streaming

Both teams fielded first in their first play-offs, with differing levels of success. At Dindigul, however, the wicket has tended to favour batting first. Siechem Madurai Panthers won the toss when they last met, so the Dragons may be due to win this one. Do not be surprised if they bat first should they do so.

After scattered thunderstorms earlier in the day, the rain should clear by the evening and the question then will only be whether the outfield is dry enough. Temperatures will drop to just below 30 degrees Celsius.

There has been a week since the last fixture at Dindigul, giving the NPR College Ground some time to recover. Matches in Dindigul have generally seen a good score posted first but there have been occasions when the dew and the pitch have meant it favours the bowling side later on.

Jagannathan Kaushik missed the first play-off, with B Praanesh playing instead. If fit, however, Kaushik could return for this must-win second qualifier. The Dragons’ team, which has generally been settled, was otherwise back to full strength.

Narayan Jagadeesan: The top run scorer in this year’s competition, the wicket-keeper-batsman has scored 398 runs in eight innings. That includes his 83* when these teams last met. Jagadeesan’s strike rate is also good, currently standing at 144.72.

Ravichandran Ashwin: It is time for the India and Kings XI Punjab star to step up, having been quiet with bat and ball in this tournament. His quality is undoubted and these big games are where the big players need to shine.

Hari Nishanth: The Dragons’ other opener struggled for rhythm in the first play-off, but his 267 runs in eight innings – including three half-centuries – show what he is capable of. If he can fire again, the Dragons should put that defeat behind them.

Dindigul Dragons were in excellent form in the group stage, winning their first six matches to cruise to first place. They rested players for the final group game, and were promptly bowled out for 99 in reply to Lyca Kovai Kings’ 134/8, but they were still favourites for the play-offs.

Instead, however, the Dragons finished just short against Chepauk Super Gillies. Chasing 170 to win, they finished on 164/7 and must now beat the Panthers if they are to reach the final.

Akash Sumra returned in place of MS Promoth last time out, and while he lacked fluency with the bat it is likely to be an unchanged team that takes on the Dragons.

Arun Karthik: Scored his second half-century of the tournament last time out, hitting 64 to top score for the Panthers. He also one hundred to his name and 345 runs in total from eight innings – all compiled at a strike rate just less than 150.

Kiran Akash: His wicket in the play-off was his 15th of the tournament so far, placing him joint-second in the wicket-taking charts. He took two of those last time these two teams met.

Abhishek Tanwar: After his super-over heroics against Ruby Trichy Warriors earlier in the tournament, his all-round ability was at the fore again in the first play-off. He took 2-32 and then hit an unbeaten 15 from seven balls as the Panthers got home off the final ball.

The Siechem Madurai Panthers have built up some real momentum since a super-over win, thanks to Abhishek Tanwar’s nerve in the one-over shoot-out, over Ruby Trichy Warriors. They have won four in a row since then, including beating finalists Chepauk Super Gillies.They have now given themselves a shot at joining the Gillies thanks to their play-off win against the VB Kanchi Veerans. Set 152 to win, Tanwar hit the winning run off the last ball, after Jagatheesan Kousik’s two boundaries in the final over had given them a chance. KB Arun Karthik had earlier top-scored with 64 from 39 balls at the top of the order, in an eventual five-wicket win.

DDD vs MAD Head to Head

The Siechem Madurai Panthers have only beaten the Dindigul Dragons once in the Tamil Nadu Premier League, but that was the big one – last year’s final. The Dragons had earlier beaten them in the group stage and again in the first play-off.

They exacted a little revenge when they met in the group stage this year too, at Tirunelveli. Narayan Jagadeesan (87*) and Hari Nishanth (57) hit a 104-run opening partnership as the Dragons posted 182/6. In reply, M Silambarasan took 4-20 and Ravichandran Ashwin 3-16 as the Panthers could only reach 152/9.

Dindigul Dragons are favourites to beat Siechem Madurai Panthers, at 1.61 to win with Bet365. The Panthers are 2.30 to win.

Dindigul Dragons were in excellent form earlier in the group stage and still possess the all-round quality to get to that sort of form, despite the Madurai Panthers' resurgence.

Back Dindigul Dragons to beat Siechem Madurai Panthers at 1.61 with Bet365.
Bet Now

Two of the tournament’s top run scorers, Arun Karthik and Narayan Jagadeesan, are both listed as wicket-keepers, though Karthik will not be behind the stumps – that will be Nilesh Subramanian. Karthik and Jagadeesan need to be picked, however, given their excellent batting form – though they are both expensive at 10.5 credits.

You will need to hunt down some bargains therefore, but first Hari Nishanth – who hit one of his three half-centuries in the last match between these two – is a must-pick batsman. Lower down the pricing scale is Sarath Raj, while Sumant Jain is even cheaper as a lower-order option. NS Chaturved and R Vivek are other options for the Dragons.

Jagatheesan Kousik has out-scored Ravichandran Ashwin so far in this year’s tournament and hit some vital late-order runs in their thrilling eliminator win. Abhisek Tanwar also proved his worth with the bat having taken a couple of wickets too. All three are worth picking up. Cheaper options, should you need them, are N Selva Kumaran and Ramalingam Rohit.

You may need those cheaper options too, given the best bowlers do not come cheap. Kiran Akash has been in excellent form with the ball, picking up 15 wickets, while Rahil Shah has 12. M Silambarasan spun Dindigul to victory when these teams last met, meanwhile. You may only be able to afford one of those, however, and the lower-cost options include B Praanesh and Jagannathan Kaushik, who are competing for the final spot in the Dindigul team, and M Mohammed.

Narayan Jagadeesan, Arun Karthik and Kiran Akash are all near the top of the stats charts this season – the first two with the bat and the latter with the ball. Jagadeesan has a good record against the Madurai Panthers too, making him worth selecting as captain. For the vice-captain, both Arun Karthik and Kiran Akash would be good options, depending on whether this is a game for the batsmen or the bowlers. 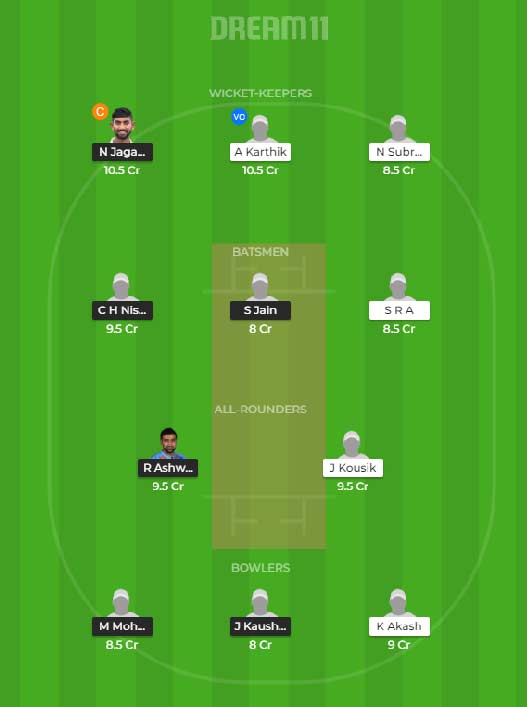 Who will win DDD vs MAD Qualifier 2?