Our Pick Dindigul Dragons are favorites to win

Having proved themselves the top two teams in the group stage, Chepauk Super Gillies take on Dindigul Dragons in the 2019 Tamil Nadu Premier League final in Chennai. The match takes place on August 15 and starts at 19:15 local time.

This is the Gillies’ third final and they were crowned champions in 2017, while the Dragons are looking to go one better than their final defeat – the first time they had reached the showpiece – last season.

It will be a battle between the Dragons’ excellent batting line-up – led by tournament top-scorer Narayan Jagadeesan and opening partner Hari Nishanth – and the Gillies’ brilliant bowling. G Periyaswamy and Harish Kumar have taken 31 wickets between them in eight games, and the key battle will be between the former and the Dragons’ opening pair.

CSG vs DDD, TNPL 2019: Where to watch/Live streaming

Although Chennai occasionally broke with tradition, the tendency during the IPL was for the team winning the toss to field first at the M.A.Chidambaram Stadium. Chepauk Super Gillies have won the toss in each of the two matches between these teams this season, so the Dragons are due to win this one.

The temperatures are due to ramp up in the week with sunnier conditions and no chance of rain in Tirunelveli. Temperatures will be in the mid-thirties.

There is a thunderstorm and high chance of rain forecast about an hour into this match which could cause problems. The forecast either side is good, however – temperatures in the 30s and just mostly cloudy.

Umashankar Sushil looks to have taken the wicket-keeping spot from A Aarif, having been selected to play in the qualifier win against Dindigul. That team was unchanged from the final group game, with fit-again Vijay Shankar included. The same team could line-up in Chennai for the final.

Vijay Shankar: While his lack of match fitness may count against him, there is no doubt the Indian international all-rounder is one of the star attractions of this final. His first over in the competition was a wicket-maiden, to highlight what he can offer.

G Periyaswamy: Saved his best bowling figures of the tournament for the first qualifier, against the Dindigul Dragons. He claimed 3-27 from his four overs to move to 16 for the tournament in total – second in the wicket-taking charts.

S Harish Kumar: The paceman has gone from being a lower-order batsman who occasionally bowled to being a key strike bowler in this Gillies team. Fourteen of the 15 wickets he has taken so far have come in the last five matches. He has also hit 149 runs.

Chepauk Super Gillies wrapped up second place in the league table by beating TUTI Patriots in their final match. Though they only posted 127, despite Hari Gopinath scoring a half-century, their bowlers did not give the Patriots a sniff – Vijay Shankar, G Periyaswamy and M Siddharth all claimed two wickets, while Harish Kumar took 3-4 from his 12 balls as they bowled them out for 95.

That set up a qualifier against the Dindigul Dragons and Ganga Sridhar Raju hit 81 from 54 balls to lead them to 169/7 from their 20 overs. In reply, Periyaswamy took 3-27 as they restricted the Dragons to 164/7 to earn their place in this final.

Dindigul Dragons are without captain and key all-rounder Ravichandran Ashwin who has already left for the Caribbean ahead of India’s test matches against the West Indies. Narayan Jagadeesan captained the team last time out. With Ashwin out and Jagannathan Kaushik having missed the last three games too, it could be an unchanged team with Adithya Arun and Arun Mozhi retaining their places.

Narayan Jagadeesan: The top batsman in this year’s tournament, Jagadeesan hit his fourth half-century in the win against Siechem Madurai Panthers and he also has an unbeaten century to his name too. In total, he has scored 448 runs in nine innings.

C Hari Nishanth: Opening the batting with Jagadeesan, the two have shared some big partnerships – including their century stand in the last match. Nishanth’s 51 was also his fourth half-century of the tournament and he has 318 runs from his nine innings.

M Silambarasan: Led the bowling with figures of 3-18 from his four overs last time out, bowling in tandem with fellow spinner Mohan Abhinav. His 14 wickets so far this season included the 4-13 he claimed against the Gillies on the opening night.

Dindigul Dragons had to go the long way through the play-offs after their defeat to Chepauk Super Gillies in the first qualifier. Chasing 170 to win, they could only reach 164/7.

It meant they had to beat defending champions Siechem Madurai Panthers in the second qualifier to book their place in the final, but beat them they did. Hari Nishanth and Narayan Jagadeesan set the tone, both hitting half-centuries in a 101-run opening stand, before NS Chaturved and M Mohammed hit seven sixes between them to lift the Dragons to 175/6.

CSG vs DDD Head to Head

Dindigul Dragons won a low-scoring match against Chepauk Super Gillies in the first game of TPNL 2019 tournament, but the Gillies hit back to win their most recent meeting – their third win in five previous matches against the Dragons.

Dindigul posted just 115/9 in their opening game, but had M Silambarasan to thank as he spun his way to 4-13 to restrict the Gillies to 105/9. Last time they met, however, Ganga Sridhar Raju hit 81 to help the Gillies to 169/7. In reply, some useful starts were not enough to keep the run rate up as the Dragons eventually posted 164/7 – G Periyaswamy’s 3-27 making the difference.

Though they beat them in the first play-off, Chepauk Super Gillies are outsiders to win the 2019 Tamil Nadu Premier League Final against the Dindigul Dragons. The Gillies are 2.00 to win with Bet365, who have made the Dragons 1.80 favourites.

Chepauk Super Gillies won the play-off between these two teams, but the Dindigul Dragons had the edge in the group stage. With Narayan Jagadeesan and Hari Nishanth in top batting form, the Dragons can claim their first Tamil Nadu Premier League title.

Back Dindigul Dragons to beat Chepauk Super Gillies at 1.80 with Bet365.
Bet Now

Narayan Jagadeesan has been the leading batsman in this tournament and his cost of 10.5 credits reflects that, but his form has been consistent and he is the only wicket-keeper worth picking. Umashankar Sushil has played the last two games for the Gillies, and costs eight credits, but he has produced nothing of note and bats down the order.

Hari Nishanth hit his fourth half-century of the tournament in the second qualifier and has been an excellent opening partner to Jagadeesan. NS Chaturved is good value at 8.5 credits, meanwhile, having injected some real momentum into the innings down the order last time out. For the Gillies, Hari Gopinath has hit some useful scores so far, while Ganga Sridhar Raju was their top batsmen when they beat the Dragons in the first qualifier.

With Ravichandran Ashwin away with the Indian test team, Vijay Shankar is the star attraction of this final – though he has looked short of match fitness in his first two innings so far. That is perhaps not enough to justify his ten-credit price tag. Harish Kumar, on the other hand, has picked up 15 wickets and batted well too. Other good all-round options include Murugan Ashwin and Ramalingam Rohit – the latter having claimed three wickets last time out.

G Periyaswamy is the leading wicket-taker of either side so far in this tournament and it was his 3-27 that won the game for the Gillies last time out. M Silambarasan was back to his best last time too, however – and starred in the first game between these teams for the Dragons. R Alexander bowled especially well in that first game too, which leaves 8.5 credits for a bonus all-rounder in M Mohammed – his late order hitting has come to the fore in the last two games and he could hammer some late sixes if called upon as a finisher, in addition to his bowling prowess.

Narayan Jagadeesan will captain the Dindigul Dragons and should captain your Dream 11 team too. His batting has been excellent so far, scoring big runs consistently. S Harish Kumar is a good all-round option, meanwhile – he has 15 wickets to his name, most of which have come in the last five games – and he has scored some useful runs too. 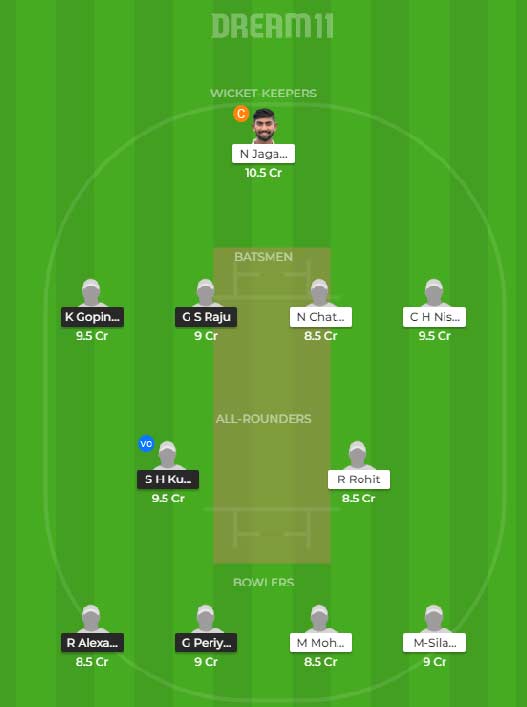 Who will win CSG vs DDD Final?