Our Pick Bellary Taskers are favorites to win

Who will win Bellary Tuskers vs Bengaluru Blasters, KPL 2019?

Bellary Tuskers will look to maintain their winning start to the 2019 Karnataka Premier League when they take on Bengaluru Blasters at the M.Chinnaswamy Stadium on August 22. The live action begins at 15:00 local time.

The Tuskers have won three from three so far, with Abhishek Reddy in excellent batting form as they saw off Bijapur Bulls, the defending champions, last time out. With six points, they are joint-top of the table with Shivamogga Lions.

The Blasters, on the other hand, have seen the rain impact on all three of their games so far. They were well placed in a no result and a tie in their first two games, but their rain-reduced match against Shivamogga Lions last time out ended in defeat.

Bellary Tuskers won the toss in the last match and elected to field first, though they have also won batting first this season. In such good form, the toss may not be as important as it sometimes is.

As has been the case throughout this week, there is a high chance of rain forecast in the afternoon in Bangalore with scattered thunderstorms and high humidity too. The temperature will be around 25 degrees Celsius.

Possibly impacted by the recent poor weather, the Bangalore wicket has played slower than it has in the past, in the IPL for example. A score of 160+ on this wicket looks a very good one.

Suraj Reddy replaced KP Appanna last time out in the only change from the win against Hubli Tigers. The Tuskers have been largely consistent with their line-up otherwise – no surprise, really, given their winning start.

Abhishek Reddy:  After scores of 35 and 24 in his first two matches, the Karnataka batsman hit 62 from 54 balls to lead the chase of 163 to beat Bijapur Bulls last time out – earning him the man of the match award in the process.

Devdutt Padikkal: The India Under-19 international hit half-centuries in each of the first two games, including 70 from 56 balls against Hubli Tigers, to be crowned man of the match in each. He then shared a valuable 50 partnership with Reddy last time out too.

Prasidh Krishna: One wicket behind fellow IPL bowler Krishnappa Gowtham, but Prasidh Krishna has taken his five with a brilliant economy rate of just a run a ball too.

With Devdutt Padikkal top-scoring in both matches, the Bellary Tuskers beat Belagavi Panthers by five runs in their first match and then Hubli Tigers by nine runs. They chased for the first time last time out, meanwhile, and Abhishek Reddy led them to a seven-wicket win, chasing 163 to beat Bijapur Bulls in just 18.5 overs.

Bengaluru Blasters have stuck with the same team so far, having yet to have a full game because of the weather. Even the two matches with results were vastly reduced because of the rain.

BR Sharath: Looks to have got back to his best form, building on his innings in the rain-reduced game against Bijapur Bulls by hitting 42 from 23 balls last time out. He needs his team-mates to start backing him up now.

Rohan Kadam: A frustrating start to the tournament continued as he scored too slowly last time out, but there is no doubt of the Karnataka opener’s ability. He was a key figure in the Syed Mushtaq Ali Trophy success and needs to recapture that form.

Doddamani Anand: Retained for this season and has shown why with the ball, returning combined figures of 3-35 from the seven overs he has bowled so far.

Bengaluru Blasters have had all three of their innings in this tournament interrupted by the rain. They were 88/3 from 13 overs against Mysuru Warriors first up, then 29/1 chasing 134 to beat Bijapur Bulls – a VJD-method tie. Last time out, they were 114/3 from 16 overs against Shivamogga Lions, but eventually fell to a seven-wicket defeat when the Lions were set 106 to win in 12 overs.

BLARY vs BLB Head to Head

Bellary Tuskers and Bengaluru Blasters have each won one of their two previous fixtures against each other in Karnataka Premier League. The Tuskers won in 2017 but last year’s match saw V Koushik bowl an excellent final over – including claiming two wickets – as the Blasters restricted the Tuskers to 161/8 in reply to their 167/8.

Bellary Tuskers are in excellent form and, though Bengaluru have been unfortunate with the weather, their form is not good. The Tuskers can win to maintain their excellent start.

BR Sharath has been the main figure in the Bengaluru Blasters’ batting line-up so far, getting back to his best form in the last two games to give him something to build from. Chidambharam Gautam is worth backing too, however, after a decent start leading the Tuskers.

Devdutt Padikkal has made an excellent start to this year’s tournament with the bat with two half-centuries and another good score last time out. Abhishek Reddy was the Tuskers’ batting star, however. For the Blasters, Nikin Jose is yet to be dismissed having shown touches of his best batting, while Rohan Kadam has fallen short but should never be written off.

There are some good options among the all-rounders, with Krishnappa Gowtham a key bowler for the Tuskers and Codanda Ajit Karthik a key batsman. Karthik is at the top of the order and in good form for the Tuskers.

Prasidh Krishna and Doddamani Anand are both in good form so far but, depending on your selections so far, that might only leave enough for one eight-credit bowler. Bharath Dhuri fits that billing for the Blasters but has not bowled much so far – nevertheless, he could be a good investment if you want to get the other key figures in. V Koushik is an alternative to Anand, but his form has not been up to his usual standards this season.

There are plenty of in-form players on show in this match who could rack up some big points as captain. Devdutt Padikkal’s batting form is excellent so far, for example. He might be a better pick as vice-captain, however, freeing up a space for Krishnappa Gowtham as captain – Gowtham has bowled well so far but also bats up the order, giving more chances for points. 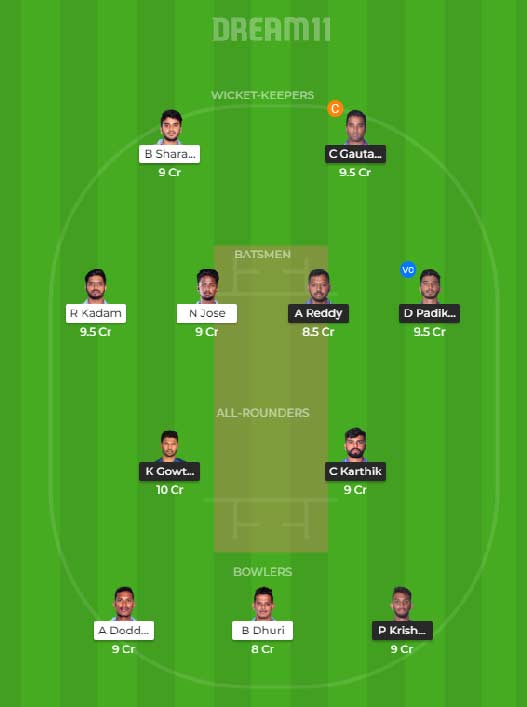 Who will win BLARY vs BLB?