Our Pick Bangladesh are favorites to win

Who will win Bangladesh vs Zimbabwe, 1st T20?

Bangladesh are set to host Zimbabwe and Afghanistan for a T20 tri-series. The opening game of the series will be played on September 13 at the Shere Bangla National Stadium in Dhaka. Live telecast of the first T20 international is scheduled to begin at 6:30 PM local time.

Bangladesh are coming into this tri-series having suffered a humiliating 224-run defeat against Afghanistan in a one-off test match at Chattogram. Prior to that, they had toured Sri Lanka in the month of July for a three-match one-day international series. Bangladesh had a torrid time on that tour where they were humbled in each of the three matches. Zimbabwe's previous international assignment came in Ireland where they played three ODIs and as many T20Is against the hosts. While they were swept aside in the fifty-over format, they managed to eke out a 1-1 draw in the game's shortest format.

BAN vs ZIM, 1st T20: Where to watch/Live streaming

Seven of the last nine T20 internationals played at the Shere Bangla have been won by the side bowling first. And since the pitch is expected to remain good for batting throughout the duration of the game, the team that wins the toss here will probably prefer to chase.

A lot of rain has been forecast for the entire week in Dhaka. There is a strong chance of heavy downpours accompanied by thunderstorms on Friday evening and so we could have a shortened game, if there is any play at all. Temperature is expected to be around 26 degrees Celsius and humidity close to 86%.

The Shere Bangla has offered batsman-friendly pitches in the recent past with 170+ having been scored here five times in the previous six innings. 150 is the average first-innings score at this ground in T20 internationals. Spinners are likely to perform better in these conditions than fast bowlers.

Bangladesh have picked a 13-man squad for the first two games of the T20I tri-series. The home team will welcome back their premier fast bowler Mustafizur Rahman who was rested for the recently concluded one-off test match against Afghanistan. The selectors have included uncapped pace bowler Yasin Arafat into the mix but he may not be drafted into the starting eleven straight away. Spinner Mehedi Hasan and all-rounder Afif Hossain have been recalled to the T20I set-up. Rubel Hossain and Mehidy Hasan Miraz who played against the West Indies last year have been left out.

Shakib Al Hasan: The Bangladesh skipper is the second-best all-rounder in the world. He is one of the leading wicket-takers at the Shere Bangla (23 wickets) as well as one of the leading run-getters (332 runs) at this ground in the T20 format. Shakib was also the best bowler for his side with eight wickets in last year’s T20I series against the West Indies.

Mahmudullah: He is another one in this line-up with the ability to play the big knocks and make vital contributions with the ball. He is ranked fourth in the ICC T20I rankings for all-rounders. Mahmudullah averages 57.85 with the bat and has 12 wickets with the ball at this ground in this format.

Mushfiqur Rahim: The wicketkeeper is a key figure in this Bangladeshi batting unit at the top of the order. He has a pretty good record at the Shere Bangla having scored 370 runs which includes a couple of half-centuries.

Bangladesh have played their last six T20 internationals against the West Indies out of which they have won three and lost as many. They beat the Windies 2-1 on their tour of the Caribbean and the USA last year in July-August but lost to them 1-2 in a three-game home series later in December. Bangladesh managed to win only five out of the sixteen T20Is they played last year. In the Nidahas Twenty20 Tri-Series held in Sri Lanka, they defeated the hosts in both their encounters against them but lost to India in the final.

Zimbabwe have assembled a 15-man squad for this upcoming T20 international tri-series. Captain Hamilton Masakadza, meanwhile, has announced his retirement from all forms of international cricket after the conclusion of this series. The team will be without one of their key men - all-rounder Sikandar Raza - who has been dropped from the squad over disciplinary issues. Zimbabwe have picked fresh faces in Tony Munyonga and Ainsley Ndlovu who are in line for their T20I debuts. Tinotenda Mutombodzi and Neville Madziva are two other young players in the squad that also has experienced campaigners with the likes of Brendan Taylor, Sean Williams and Craig Ervine.

Hamilton Masakadza: The Zimbabwean skipper is set to retire after the end of this series and he will want to make his last few innings count. The opening batsman has scored the most runs for the team in the 20-over format - 1529 runs - and he will be expected to take the team off to a flying start.

Sean Williams: He is among the world's best all-rounders in T20 internationals. The left-hander is one of the leading run-scorers for Zimbabwe and has cracked four fifties in the format. Williams has 23 wickets under his belt and he can trouble the Bangladeshi batsmen with his offspin.

Craig Ervine: The left-handed top-order batsman had a very good T20I series in Ireland where he topped the runs charts with scores of 55 and 68* in the two matches. He has plenty of experience in this format and Zimbabwe will want him to continue his impressive form.

Zimbabwe are struggling big time in the shortest format of the game and have lost 12 out of their last 14 T20 internationals. After suffering a 0-2 whitewash at the hands of the Proteas in South Africa last year in October, they lost 0-1 to Netherlands at Rotterdam in June before drawing the two-match T20I series against Ireland at Bready in July. Zimbabwe put up an impressive batting performance in their convincing eight-wicket win last time out, chasing Ireland's 171 with 20 balls to spare.

BAN vs ZIM Head to Head

Bangladesh and Zimbabwe have played nine T20 internationals against each other in the past with the former slightly ahead of the latter with a 5-4 scoreline.

Zimbabwe have beaten Bangladesh thrice in their last five attempts in the 20-over format including the previous two occasions - by 31 runs and 18 runs in January 2016 at the Sheikh Abu Naser Stadium in Khulna, Bangladesh.

At the Shere Bangla National Stadium, the two countries have faced-off twice in the format - in November 2015 - with both winning once each. While Bangladesh won the first of those encounters by four wickets, Zimbabwe emerged victorious in the second by three wickets.

Bangladesh are hot favorites to win this opening T20 international of the tri-series at 1.40 with Bet365 and 1.34 with 10CRIC. Zimbabwe are the underdogs for this match and they are being offered at a higher price of 3 on Bet365 and 2.80 on 10CRIC.

Zimbabwean cricket is currently going through a bad phase and it will be difficult for their players to focus and perform amid all this turmoil. They have suffered defeats on 12 occasions in their last 14 T20 internationals which shows how much they have been struggling in the game's shortest format. Zimbabwe, however, will take some confidence in the fact that they have beaten Bangladesh three times in their last five T20 encounters against them. The hosts, on the other hand, would be feeling dejected after their big loss to Afghanistan but they will look to put that failure behind them and start afresh. Bangladesh are still a pretty strong team with quite a few match-winners in their ranks and it will be very tough for Zimbabwe to beat them in their own conditions.

We have picked six players from Bangladesh and five from Zimbabwe in our Dream11 team for this match.

We have picked Bangladesh's Mushfiqur Rahim ahead of Zimbabwe's Brendan Taylor as the wicketkeeper in our Dream11 team. Mushfiqur, due to his decent batting record at this ground, is worth picking at 10.5 credits.

Craig Ervine has been doing a good job with the bat for Zimbabwe and the in-form batsman is available for 9.5 credits. We have also included Mahmudullah and Soumya Sarkar at 9 and 8.5 respectively.

Our Dream11 consists of three all-rounders - Shakib Al Hasan, Sean Williams and Ryan Burl. Shakib is unsurprisingly the most expensive pick at 11 credits while Williams and Burl can be picked for 10 and 8 credits respectively.

Tendai Chatara will probably lead the Zimbabwean pace attack and we have picked him at 8.5 credits. Chris Mpofu and Mohammad Saifuddin have also been offered at the same price. Taijul Islam is another quality bowler and the left-arm spinner is available for 8 credits.

We have picked Shakib Al Hasan as the captain of our Dream11 team.

We have picked Mahmudullah as the vice-captain of our Dream11 team. 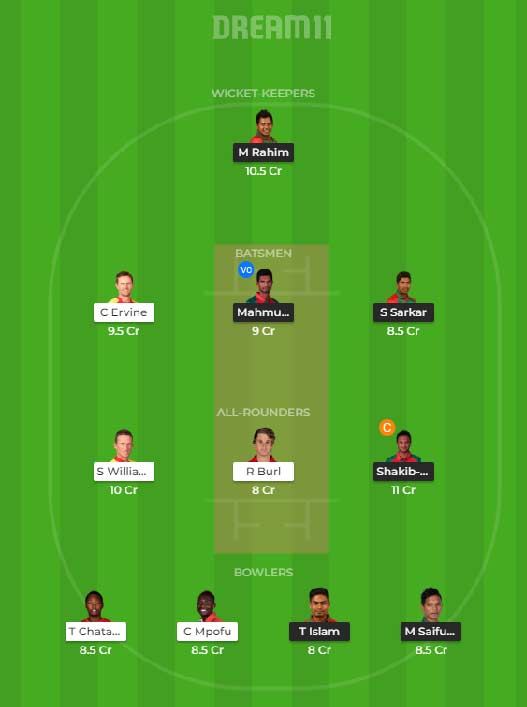 Bet on Bangladesh vs Zimbabwe Match