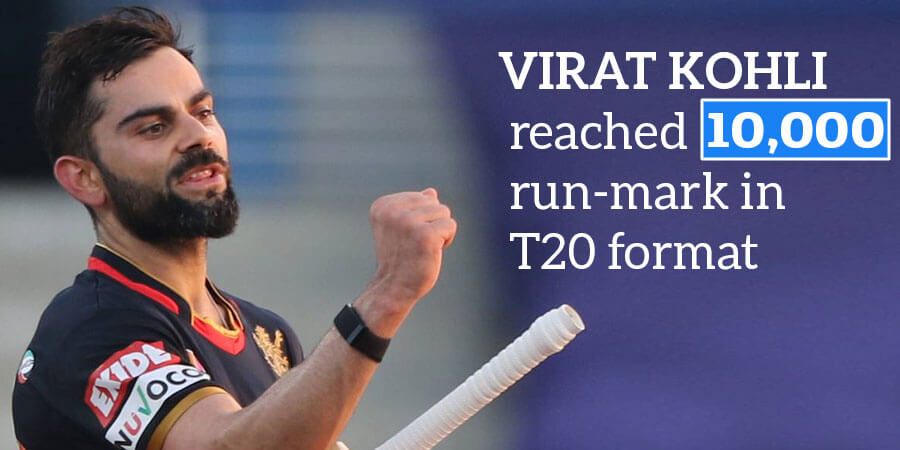 Team India and Royal Challengers Bangalore captain, Virat Kohli, on Sunday achieved the milestone of 10,000 T20 runs. He is the first Indian to reach 10,000 runs in the format. Kohli reached this mark in the IPL match against Mumbai Indians. Before the match, he was 13 runs short of the mark and during the match he pulled Jasprit Bumrah’s ball for a six to get to his 10,000th run.

Since the start in 2007, Kohli has played 314 T20 matches and scored 10,038 runs with an average of 41.65, which is the highest average among the top-10 batsmen with highest runs in T20. He is currently at the No.3 spot in the list, just behind Shoaib Malik, Kieron Pollard and Chris Gayle, who are at the 3rd, 2nd and 1st spot, respectively.

Kohli has recently announced that he will step down from the captaincy duties for Indian T20I team and Royal Challengers Bangalore. He cited workload pressure as the reason behind his decision, and said he wants to concentrate more on his batting. He will give up the RCB captaincy after the end of IPL 2021 and the T20I captaincy after the T20 World Cup which is scheduled to start in October this year.

RCB is currently sitting at the No.3 spot at the points table in the IPL and they will be looking forward to win this season and hand over at least one IPL trophy to the captain, Virat Kohli.